In our tumultuous moment, seeing work by artists from nations that have known tragedy our own has not can be enlightening 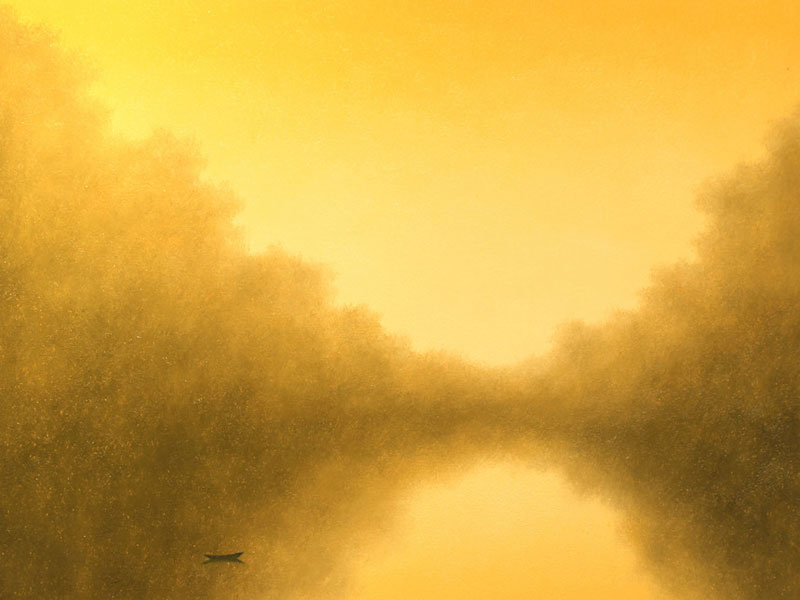 In our tumultuous moment, it is important to keep perspective. One way to do that is to look at other, more tumultuous times and places. The Asian American Resource Center's "Vivid Strokes: Contemporary Paintings From Vietnam" gives us that opportunity. The six artists represent very different outlooks on the Vietnamese experience, especially as it pertains to the effects of the Vietnam War. For his part, Ha Tri Hieu chooses to focus on the Vietnamese countryside, to which he was evacuated from Hanoi during the war. In Reflection, a large, unidentifiable red animal hangs upside down from what looks like a strip of grass. Two country girls stand on either side of the animal with their mouths open, calling out or singing as the animal looks on. The image is haunting, an effect that is emphasized by the empty background, like a Marcel Dzama illustration. The singing girls show up again in Hieu's Three Country Girls, which features another unrecognizable creature – a cow? – behind three girls with the same open mouths hallooing to the heavens. The paintings are giddy, but they are also somber, as though the country people contain some crucial knowledge we no longer have access to.

It is difficult to tell if Doan Hoang Lam's work is more celebratory or foreboding. In Dragon Dance, a crowd of muddy figures huddles at the bottom of a gray canvas, marching like zombies while holding a yellow dragon aloft. The presumably inanimate dragon is coiled at sharp angles, its jaws opened wide. It is so bright that it makes the otherwise morose canvas seem uplifting, as if the people, having suffered, are still able to cheer for something. That perception is compromised, however, as the brilliance of the dragon also serves to highlight the dimness of the people. Like Hieu, Lam was born in Hanoi, which he remembers as "poor, undeveloped, [with] moldy walls and tiny alleys, [and] dim lights that fade at the end of long dark streets." That dismal description seems apt to the crowd in Dragon Dance, though coupled with the dragon, some hope (perhaps false) shines through.

I've been watching Bob Ross on Netflix lately. His "happy tree" scenes put me at ease, but not the way Hong Viet Dung's River at Dawn does. A river bordered by fog-enshrouded trees flows so slowly it seems still. The river, trees, and sky are tinted various shades of yellow. A small raft floats in the foreground. Landscapes used to be among my least favorite genres, but now I take solace from them. An image of rolling green hills or a mountain forest invites me to picture myself within it, and what had once been boring for me – "There's nothing happening!" – became a way for me to get away from the stupid, tedious monotonies and savageries of everyday life. With River at Dawn Dung calls on Buddhist meditation practice to enable the viewer an escape onto a peaceful water, at the center of a radiant country that gleams like a halo. This escape is precious. At a time when so much in our own country seems chaotic and menacing, it may be enlightening – and comforting – to look to the work of those whose countries have seen tragedy that we in the United States cannot imagine. We may have entered a black era in American politics, but human history is long, and others have gone before us. This is one of the great powers of art: to document our collective experience, so that we may learn from it. 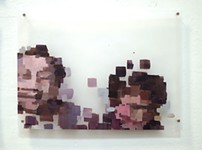 "Sherry Xiao: Thinking of Home"
A series of paintings with figures that are blurred and pixelated neatly illustrates the shortcomings of digital interactions