The company's program, with a new work inspired by the 1966 UT Tower shooting, spoke powerfully to our present moment 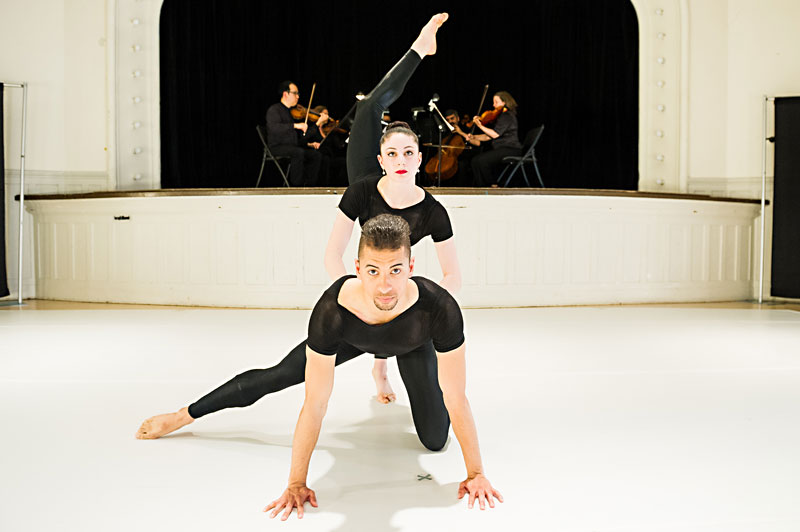 Sigh, America – what can our country's artists tell us about ourselves? Spectrum Dance Theater, based in Seattle and headed by revered contemporary choreographer Donald Byrd, joined the top-notch New York-based Aeolus Quartet at the University of Texas for two performances of Byrd's dances to music by American composers. The dances were as varied as the music by Charles Ives, Aaron Copland, Vincent Persichetti, Charles Wuorinen, and Yevgeniy Sharlat. And while, yes, those are a bunch of white guys (Jews and immigrants included), it's worth noting that Byrd is a black man and his company looks, racially, like America, which makes the work all the more rich and credible.

Unfortunately, I missed the first work on the program, the ensemble piece "Fanfare!," danced to Ives, but I slipped in just in time for the duet "Solo/Duo," a cheerful, energetic romp in sneakers to Copland. In the third work, "I from myself am banish'd," a quartet whose title is a line from Christopher Marlowe's Edward II, Byrd skillfully alluded to Graham and Balanchine via Persichetti's String Quartet No. 2, Op. 24. The dance was austere, costumed in grays, with pummeling fists and arms constrained to the sides, yet aspiration was not quashed; jumps grew higher and higher, and the dancers moved together on a diagonal, toward a ray of light. After intermission, "Septet" was a deep dive into Aeolus' alert performance of Wuorinen's dynamic String Quartet No. 2. Although the dancers were costumed in black and white, their dancing, shape-shifting between the balletic and the athletic, rendered the music, with its lilting ruminations, burbling pizzicato, and explosions of slicing bows, in hypercolor.

The program closed with an exciting double premiere: a new dance by Byrd to new music by Sharlat, who is on the faculty at the Butler School of Music. Sharlat was born in Moscow and immigrated to the United States in the mid-Nineties, and in a way, it seems that his vibrant, bittersweet String Quartet No. 4 could only have come from the wide-frame, complex experiences of an immigrant. Light and dark weren't opposites but, rather, shades of a single phenomenon. Midway through the piece, one of the violinists produced a harmonica, whose sounds were emulated by the remaining strings. Soon after, the harmonica was replaced with a kazoo, its brazen childishness eventually devolving into something like an alarm, fading in and out from behind the strings.

By the end of the piece, all four musicians were on kazoos, harmonizing a tune that was both haunting and ridiculous, in a heartbreaking, charming sort of way. The dance, Byrd's "August 1, 1966," confirmed that this was an elegy. Spectrum's ensemble of 13 dancers, wearing soft fabrics in shades of gray, seemed to pause time to explore the emotions that resonate from the terrible day when Charles Whitman shot 49 people from the University of Texas clock tower – and, by association, the terror, anxiety, and mourning of similarly dark days in American civil history. Groups dared to move only in a chain, linked by hands held fast. Solos mourned lost innocence, and duets considered the futility of intimacy. The piece ended with the ensemble lying on their backs, hands trembling in the air, suggesting, perhaps, that there are parts of us that can't move on from such a terrible blow. Given the misogyny, racism, anti-intellectualism, and corruption currently infiltrating our government, how many of us, paralyzed by fear and betrayal, can relate? We need intelligent, experienced artists like Byrd and Sharlat more than ever – step right up, and get your tickets.

'Creativity in the Face of Death: The Contemporary Resonance of Terezín'
UT Symposium honors and ponders art created in the Nazi concentration camp

Conference Confluence
Austin hosts not one, but two national conferences on the arts the same weekend in June