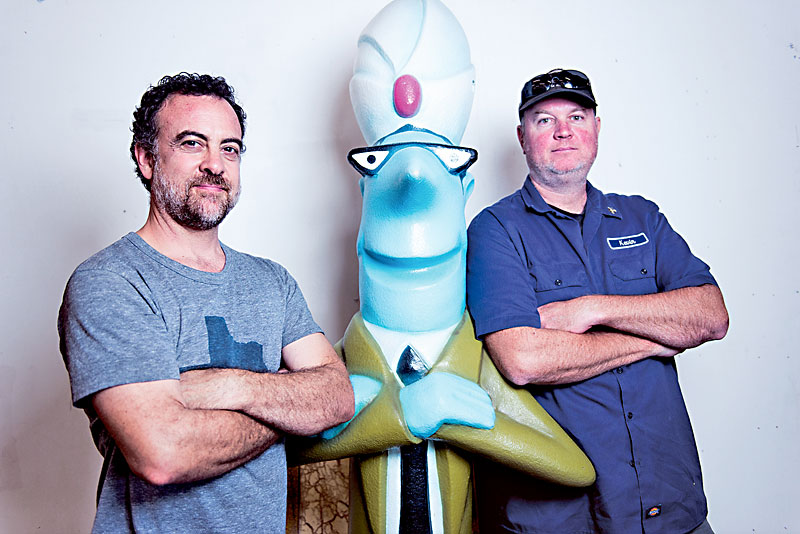 As I write these words, the interior of Blue Genie's new Art Bazaar space looks like an abandoned warehouse riddled with a maze of naked room dividers. By the time you read this – probably on the weekend of what everyone calls Black Friday – that space at 6100 Airport is going to look like the professionally produced wonderscape of fantastic art and craft that you likely recall from the bazaar's many previous incarnations.

That's the idea, anyway, and it's an idea that we're willing to bet will reach fruition, even in just a week's time. Because the Blue Genie crew, they don't tend to chill.

"We've always operated on trust," says Art Bazaar co-honcho Dana Younger, standing on the venue's recently completed entrance deck with its well-designed combo of wooden stairs and ramps. "We decide what we want to do, then trust that it's gonna work out. And then we work like hell. We bust our asses to make things happen."

"And what the hell else are we gonna do?" asks Kevin Collins, Blue Genie jefe grande. "This," he says, "this is what feeds us."

The Blue Genie Art Bazaar started back in 2001, when Blue Genie Art Industries, the company that creates giant art and commercial sculptures – the Fran's hamburger girl, those armadillos swarming the entrance of Threadgill's World HQ, the Bullock Texas State History Museum's immense bas-relief facade, and so many others – decided to host a sort of employee-generated holiday gift shop in its Springdale Road workspace. And, given the folks involved and the things they created, that pop-up market was an instant success – and became increasingly popular, year after year, until it outgrew its Springdale britches and stepped into an annual gig at the Marchesa at Lincoln Village. That was in 2006, and so we've grown used to the Blue Genie presence there, a presence decked out with offerings from more than 200 local artists and designers. But now, after nine years, they've moved again.

If you want to blame somebody for that move, citizen, you can blame the Austin Film Society. But the Blue Genie people don't blame them. The four partners here – Collins and Younger, along with Rory Skagen and Chris Coakley – are closer to thanking the AFS for a new opportunity.

"When AFS took over the space," says Younger, "it was a surprise; we didn't know it was coming – but they were super nice about it. They were like, 'Okay, we're renovating the space in November, and you can't be in here. And we love you guys, you can come back, but you'll have less space.' And that didn't work out for us – it didn't feel right to reduce the amount of space we were using. So we decided to look around and find a new home."

"We're definitely celebrating the Austin Film Society," Collins concurs. "With Salvage Vanguard and Rude Mechs and so many other arts organizations struggling right now, it was a small win for this whole town that AFS is actually going through an expansion and gaining a theatre."

"Our friend and Realtor Mishell Kneeland helped us out with this space," says Younger. "We wanted to be in this general area, and so when she found this one, we walked in and were like, 'Yes! We'll take it!' Despite the fact that it was full to the ceiling with cubicle walls from TOPS storage. At that point, we could get about 10 feet into the space."

When the Blue Genie Art Bazaar guys were shown the new space, Dana Younger recalls, “We walked in and were like, ‘Yes! We’ll take it!’ Despite the fact that it was full to the ceiling with cubicle walls from TOPS storage.”

Collins grins, remembering. "Yeah," he says, "it was a little grubby, but we saw its potential. And the idea of continuity is important to us – staying in this area is important. And this whole neighborhood, Crestview, is very, very popular. Plus, it's got an Airport Boulevard address, and people know Airport, so I think they'll be comforted by that. 'Oh yeah, the Art Bazaar is still in the same basic area.' Hell, for years people have been showing up to the old Springdale address – and now Blue Genie's not even there anymore." (See "Blue Genie Art Industries Is Moving," March 29, for that story.)

"The bazaar is definitely not at 916 Springdale!" says Younger.

"With this space," says Collins, "the Airport Boulevard address is powerful. And we're across the street from what's become ACC Highland. Dana was just telling me that the entire ACC Art Department is moving from Rio Grande to here. We're already in talks with them about a faculty exhibition in this new space."

"There will be no shortage of opportunities of things to do here," says Younger.

Well, no, there's seldom a shortage of opportunities of things-to-do anywhere in Austin. What there is, more often, is a shortage of funding. But that's not something the mighty Blue Genie has to concern itself with, right? Because this new space is less expensive than the previous arrangement at the Marchesa?

The leap of faith at 6100 Airport comprises 11,000 square feet of display area (and a bar, of course, to better fuel the traditional opening party) which will be filled with wares from the usual suspects and more. "We typically take on 20 to 25 percent new artists each year," says Collins. "It helps maintain the health of the show, and it's always interesting for us to see the new talent that's out there."

"This is my first year participating in the bazaar," says Philip Edgerton of EdgeWorks Design, whose touch-activated industrial lamps are made of metal parts salvaged from Austin scrap yards. "I've been showing my creations at a few galleries and during the EAST/WEST studio tours, and I think this new Blue Genie space is going to be great. It's easier to find, parking will be better, and I think the one-big-room layout will be less confusing to customers."

"I've been doing the art bazaar on and off since 2007," says sculptor Alejandra Almuelle. "The people that put it together, the way they organize and advertise, they make it very easy for the artists in the show."

And that leap of faith is, after all, springboarded by a company that's not hurting for economic support. "Right now we're doing a giant Lucky Cat for a ramen house in Houston," says Collins, "and rebuilding an architectural capital for the first bank that ever opened in Texas, back in the 1890s: The capital and facade blew off in a hurricane in the 1950s, so we're fixing that. And we just took a stab at a 15-foot-tall football robot for Fox Sports, for the Super Bowl. So, yeah, Blue Genie's doing just fine."

And they're doing fine to the point of welcoming Austinites, starting on Friday, Nov. 25, to the latest incarnation of their annual gift emporium – which, if these boon fellows are to be believed, will be even bigger and better and giftier than ever.

"Hopefully it won't be too overwhelming for people," says Collins, surveying the activity – the arrangings, the hammerings, the drillings, the sandings, the polishings – going on within the cavernous venue.

Younger nods, years of experience in building things agleam in his brown eyes. "Yeah," he says, "we try to stay just south of overwhelming."

A version of this article appeared in print on November 25, 2016 with the headline: Just South of Overwhelming