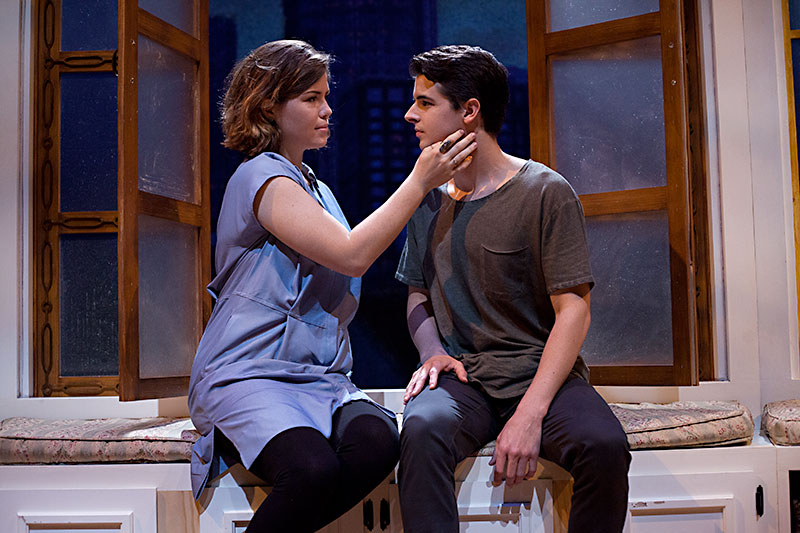 Wendy Darling is a woman devoured by her past. Her obsession with Peter Pan, the lost boy who took her on the childhood adventure of a lifetime, has rendered her a sad and isolated adult who clings desperately to his memory and cannot move on. Despite leaving Neverland and choosing to grow up, Wendy has fully failed to launch. She still sleeps in the nursery every night with the windows open in the hope that she will see her long-lost boy again.

During the course of the production (which clocks in at a tight 90 minutes), Wendy tells us quite a few times that she only gives herself eight minutes a day to think about Peter, but between the visits with her therapist, arguments with her mother, and reminiscing with the lost boys who decided to grow up, it becomes clear that for her, pining away for Peter Pan is much more of a 24-hour-a-day affair. Needless to say, she doesn't date much.

When an unexpected admirer finally makes his feelings known, Wendy pushes him away and falls back into her familiar and dependable sadness with the added depressing discovery that she has lost her Kiss – she gave it away to Peter Pan all those years ago. Resolved to get back what's hers, she undertakes a mission to find Peter and recover her Kiss at all costs.

In Lost Girl, the University of Texas Department of Theatre & Dance has built a world simultaneously steeped in magic and the mundane. Elements like the simple (yet elegant) set design, surprise movement pieces, and a Greek-esque chorus replace faith, trust, and pixie dust with fear, loneliness, and fireflies.

In addition to a solid ensemble cast, Lost Girl is studded with standout performances. Adriana Scamardi's portrayal of Wendy is masterful. In spite of the overwhelming grief that saturates Wendy, Scamardi constantly finds new shades of expressing it, resulting in a multilayered and complex performance despite the static nature of her character. Luke Stodghill's Peter Pan lives in the moment so much that he verges on perpetually baffled, and Josh Cole makes it impossible not to root for Slightly, a lost boy who is far less lost than he lets on.

While the play deserves accolades for Cara Phipps' direction and almost every other aspect of its production, Kimberly Belflower's script is the true star of the show. Her language is engaging and direct, and sparkles with wit and magic that keeps seamlessly in tune with the Peter Pan mythos while invoking reminiscences of young love and great loss. As the play nears its inevitable conclusion, we, along with Wendy, are faced with an all-too-familiar choice: to stay mired in past memories forever or to let go and recognize and accept the love being offered in the here and now.

From Neverland to New Orleans, Lost Girl is for anyone who has ever known the deep and persistent heartache that comes with loving a lost boy. Here's hoping that one day, all the Wendy Darlings of the world learn to leave the nursery and close the window forever.