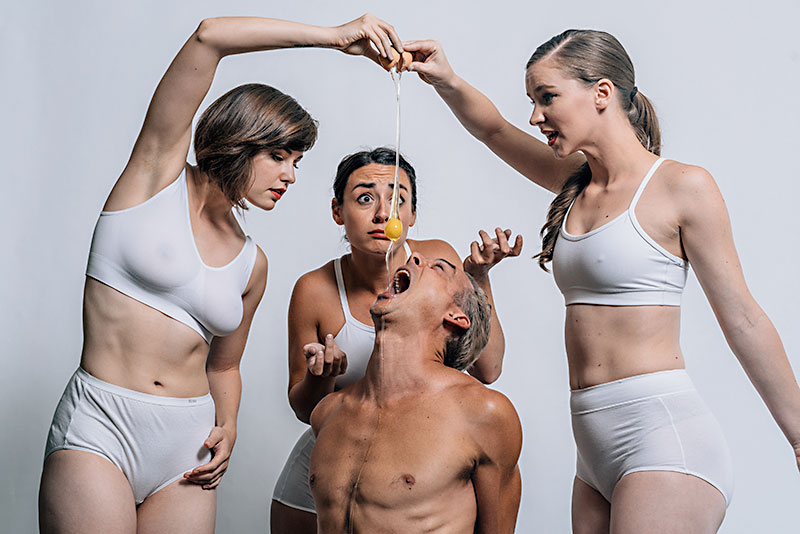 
Revolve Austin, an event presented by NunaMaana Immersive Dance Theatre and Verge Dance Company, gathered nine dance groups at the 19th-century Charles Johnson House, near Austin High. Advertised as a "party," the event began with pre-show mingling – lubricated by a signature cocktail, the grapefruit-and-vodka greyhound, or "Sparklehound" in this context, ladled out with red plastic cups – in the expansive front yard of the house. The weather was lovely, and the area around the large live oak was lit expectantly and flanked on one side by a rigged-up trapeze lyra (like an industrial-strength hula hoop fused with a trapeze, for aerial work) and on the other by a raised stage. After half an hour, a group of dancers gathered beneath the tree, their bare feet quickly becoming muddy as they danced a playful, eerie ritual. Performers with painted faces ascended the lyra. The doors to the house opened, and the audience was free to roam among the various dance works being simultaneously performed inside and outside.

There was no thread cohering the event as a whole, nor were all of its parts necessarily site-specific works; several of the works, in fact, seemed not to regard the context of the event or venue at all. But a work in the narrow kitchen of the house, "Still Life 375°" by the collective Blipswitch, was an engaging exemplar of the possibilities. The group had transformed the space, its long banks of cabinets and mismatched ovens usually seen only by caterers of the weddings that take place on the grounds, into a kitschy underground party where the help hang out in their underpants, have whipped-cream fights, and throw popcorn on the floor. Viewing the scene from outside the door frame was like looking into a peephole diorama, with scale and context contributing to the glow and vibrancy of a quirky interior world.

An airy room upstairs housed a wildly different offering: a duet with silks performed by aerialists Anika Jones and Amy Myers, performing here with Rapt Aerial Dance (they've also worked with Blue Lapis Light). Myers lunged outward, restrained by a silk around her waist, and then perched in a windowsill while Jones, an exceedingly graceful and enrapturing dancer, climbed the silk effortlessly and descended it in slow rolls. In the intimate space, we could see the truth behind Jones' control and suppleness on the silk: her superhuman, lean musculature, power that rendered her silk solo an uninterrupted extension into sculpture and space.

Of course, there were other performances in other parts of the house, but reviewing this kind of event presents a dilemma for the critic. In the interest of objectivity and information-gathering, the critic-as-journalist should observe and give equal attention to as much of the work offered as possible. But in the interest of reporting on the experience from the audience and considering a work within its own context, the critic-as-audience member should respect the conventions of the event, which invited audience members to move freely among the works, choose to spend time with some works over others, and determine when to leave. While I assumed the responsibility of visiting all the works at least briefly, I happily allowed the latter charge to win out – both at the event and in writing this response. At a certain point, I glanced around at the "party," still going strong, and decided that I was finished.

A version of this article appeared in print on November 11, 2016 with the headline: Revolve Austin: A Movement Display