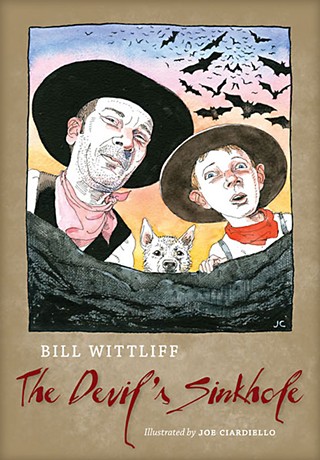 Bill Wittliff's boy named Papa is back for more picaresque adventures through 1880s Central Texas in The Devil's Sinkhole, his follow-up to 2014's The Devil's Backbone. Both books are named for actual Texas geographical locations that prove central to the plot. Both are propelled forward by a folksy narrator and a quest. Both are exquisite, magical, and fun reads inspired by the stories the author heard in childhood.

Papa and his philosophical cowboy pal Calley Pearsall are trying to avoid Pelo Blanco, a noose-wearing force of vengeance intent on killing every living family member of the men who hung his father, including Papa's already-dead evil father Old Karl. The Wild Woman of the Navidad, a Texas folk legend of a runaway slave that Wittliff encountered as a boy from J. Frank Dobie's writings, also plays a major role here, as do the mysterious Shimmery People. Wittliff has deep thoughts lurking as well: "... they ain't nothing got a Right Place in the World cause Ever Thing is just a Part of Ever Thing else," Papa wisely states. "It's all just one Big One Together." For Wittliff, a big part of the tale is how we form nontraditional families. We are, indeed, all in this together, and it's a wild ride that earns comparisons of the book to Mark Twain's writings. Not only a good yarn, the novel is aided by the expressive artwork of Joe Ciardiello, whose images both rival and match in tone those that Jack Unruh, who died earlier this year, used to illustrate the first book in the trilogy. Some tag Wittliff a screenwriter; others see him as a master photographer or a publisher of fine books. It's time to call him a novelist and a master storyteller. Now, where's book three? 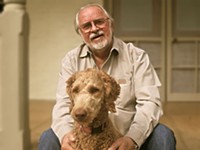 Telling Stories
Wittliff seeks the "yes" in his debut novel, The Devil's Backbone 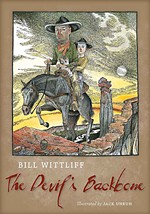