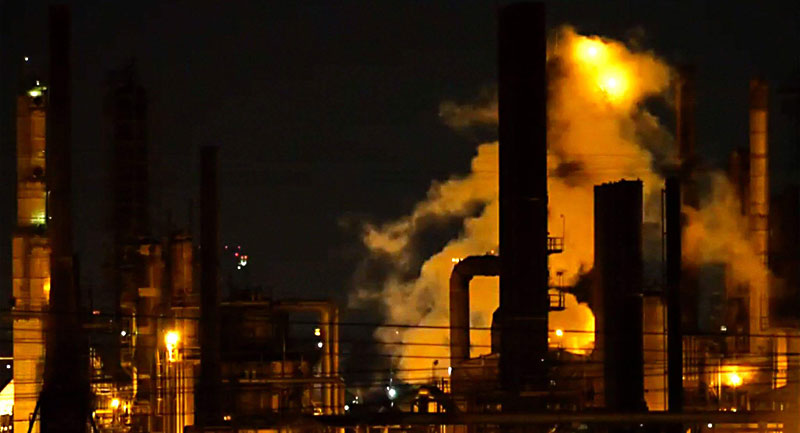 As a kid, I used to take trips with my parents to Houston, sometimes to see Astros games, sometimes simply to visit my aunt and uncle. On the way to and from Houston, along Highway 71, I always took note of the Fayette Power Project. The massive power plant was especially striking at night, a glittering city at the end of a darkened Power Plant Road. Smoke billowed from chimneys. Machinery was at work. From such a distance, it was impossible to make out any human presence, so the machinery seemed to be operating itself, as though an industrial intelligence saw to its own affairs, generating power from power at the edge of sight.

Tania Mouraud's "Everyday Ogres" captures that sense of an ominous, enigmatic power and expands on its implications. The show is made up of three large-scale videos and a text-based wall piece. The most striking moment is with the videos, which are displayed in two darkened rooms. The most recent, Fata Morgana, was recorded this year at a refinery along the Texas Gulf Coast. If you have not been to the area, imagine the Emerald City from The Wizard of Oz turned to steel and multiplied into a megalopolis. One can drive for miles finding new, glowing incarnations of production, but Fata Morgana focuses on only one. It is a long shot of a steaming refinery at night. Clouds of vaporous fumes rise out of chimneys and weblike architecture with a bizarre lack of reference to the human beings who supposedly designed and built it – or to the humans (us) who will put its products to use. It could be an image out of The Matrix or Terminator 2, an extreme of human ingenuity that goes well beyond our own capacity to manage it.

The other two videos were made outside the United States. Once Upon a Time records deforestation in France and Canada. Ingenious and terrifying devices attached in various ways to immense trucks rip, tear, gnaw, and otherwise demolish trees with gruesome efficiency in a way that quickly begins to feel aggressive, as if the machines have a hatred for the vulnerability of the trees, and for nature itself. Watching it is disturbing, like bearing witness to a murder or a rape. Face to Face, which depicts scenes from a German garbage dump, goes even deeper into the madness that makes industry both purely mechanical and fanatically wrathful. Much of Face to Face features a slow-moving train of steel cars moving along a track in front of a hill of strewn metal. According to Mouraud, "In the European unconscious, these two elements [train and refuse] are deeply related to images of the Holocaust." She goes on to call it a "striking analogy between ... human annihilation by industrial means and human disengagement through the industrial process."

Perhaps the most horrifying element of the show is Mouraud's use of sound. It is a deafening, droning roar that combines the destruction of trees and the tedious hum of the machinery, like a bawl from the mouth of a depthless cave. The impulse may be to accuse the machines and their noise, to point fingers at those who would choose such an eradication of our environment, and on such an epic scale. But the noise itself is an accusation. It gets right in our faces and bellows: GUILTY! GUILTY! GUILTY! We may deny, but in vain, because the holocaust Mouraud exposes is our own.