With 10 artists making portraits of themselves and one another, it’s the variety of styles that provides the show’s strength 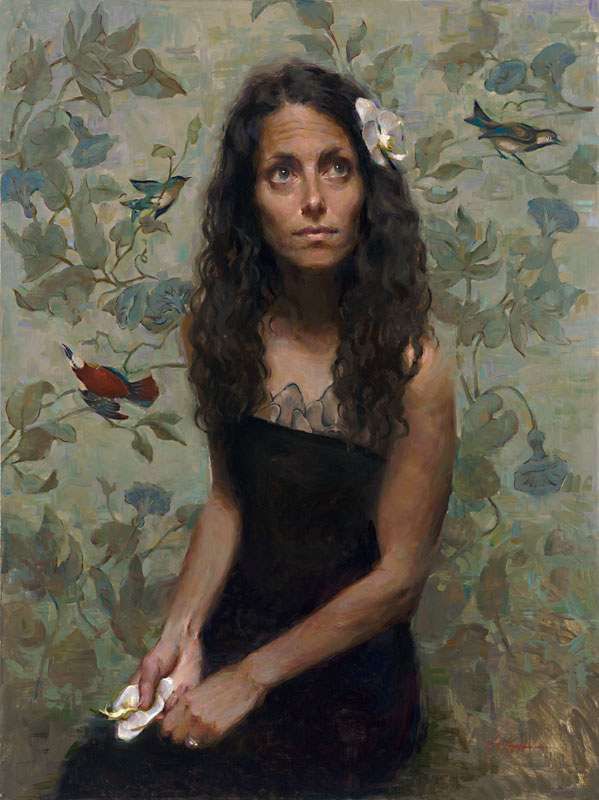 Flight of Fantasy by Karen Offutt

"Painters Painting Painters" highlights portraits by 10 artists, each of whom contributed three portraits: two of other artists in the show and one self-portrait. The work tends toward the naturalistic rather than the abstract. For example, Johnnie Sielbeck's self-portrait, Favorite Brushes, is a simple and sincere look at the artist, seated and wielding her tools in a shaft of sunlight. Similarly, Chris Chappell's Mike Peterson in My Studio shows Peterson reclined with his legs crossed in the bare corner of a room. Chappell's expressive brush strokes make the image modestly frantic, but the figure of Peterson remains serene amidst it all.

The show's strength is its variety of styles, and the most arresting of those styles may be Karen Offutt's. What makes Offutt's work stand out are her choices with light and gesture. In her self-portrait, Lighthouse, Offutt appears to be sitting on a very low stool or possibly kneeling on the floor. In either case, Offutt, dressed in jeans, sandals, and a gray hoodie, is crouched with hands clasped and head lowered as if in prayer. She is downcast, meditative, and brilliant with light in an otherwise darkened room. The lighting and composition lend the utterly contemporary Offutt the kind of gravity and drama I would expect from a saint in a Baroque religious painting.

The same gravity applies to Offutt's Dissection, which appears to be a portrait of artist Denise Fulton. Fulton is painted in bust on a muddy background similar to the one in Lighthouse. She wears a dark shirt and has dark hair, but little is lost as Offutt again manages multiple compelling moments with a deft manipulation of light. A glow emits from Fulton's arm and shoulder, then disappears into shadow at her neck, only to reappear along the dyed blond streaks of her hair. These streaks guide us to Fulton's somber expression, eyes downcast, as in Lighthouse. Finally, a wisp of blue lining one side of Fulton's head foregrounds it against the murk behind her.

The third Offutt piece is Flight of Fantasy, a portrait of artist Jennifer Balkan. It is almost an opposite of the other two. Balkan is seated in a blue dress. The muddy background has been replaced with a pattern of flowers and brightly colored birds. Perhaps most significantly, Balkan is looking up rather than down, her eyes wide and attentive. She is optimistic in a way the other women in Offutt's paintings are not, but all the same, she doesn't smile. She seems to be waiting for something, trying to be patient with a vaguely uncomfortable process, like portrait-making. This counterintuitive choice to find beauty in something other than the smile is a recurring theme in historical portraiture, as well as in Offutt's work. I am especially appreciative of that choice in a time when it seems hardly any moment is too serious to say "cheese" and grin for a camera.

The only regret about the show is that it is difficult to tell who painted what. I have to assume, by process of elimination, that Lighthouse is a self-portrait, but it took some work to figure that out (assuming I'm right). Offutt's paintings are not displayed together, and the works are not explicitly labeled. Close examination provides answers, but not all of them, which is too bad. However, for the artists whose styles are as striking as Offutt's, it hardly matters. The work speaks for itself, regardless of the subject.

A version of this article appeared in print on October 28, 2016 with the headline: "Painters Painting Painters" 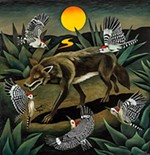 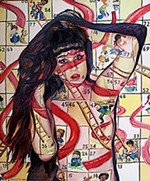 "Denise M. Fulton and Sam Yeates: A Shared Vision" at Davis Gallery
We got your signs and signifiers right here, mon ami – and that's just lagniappe