In this drama featuring Harry Houdini and Arthur Conan Doyle, a debate on the talking dead springs to dramatic life 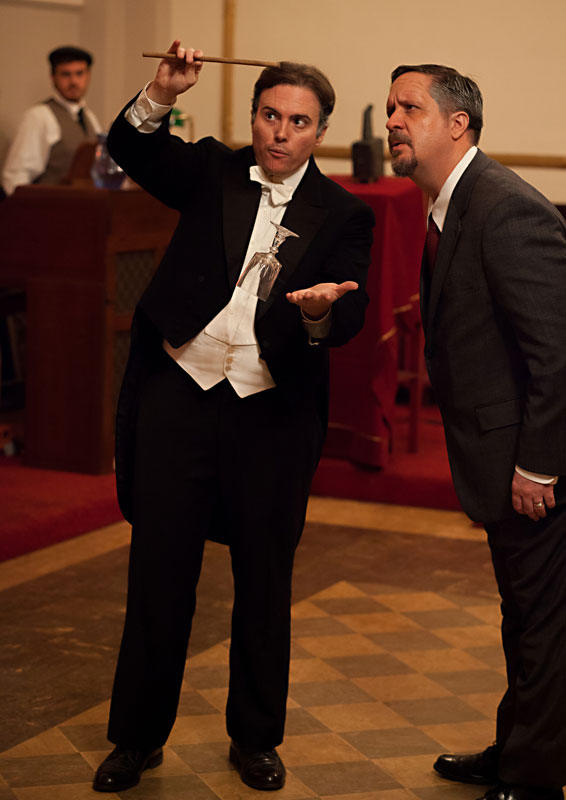 Which stirs your passions more deeply: grief or fraud? The anguish of knowing you'll never see, never talk with, a deceased loved one again in your life, or the anger at seeing a cheat profit off someone's grief by pretending to make contact with the spirit of that person's dearly departed parent, spouse, or child?

Your answer may determine which side you favor in this latest theatrical adventure from the Hidden Room Theatre. An original creation by Artistic Director Beth Burns and professional illusionist Patrick Terry, Houdini Speaks to the Living bears the appearance of an educational exercise, a re-creation of the type of lecture given by Harry Houdini when he would leave off the nerve-jangling escape acts and stunts for a night to rail against bogus psychics, phony mediums, and anyone fraudulently claiming to possess paranormal abilities. But the show's creators take advantage of a curious historical truth – that Houdini was friends with Sherlock Holmes creator Sir Arthur Conan Doyle – to engage in some dramatic sleight-of-hand. Doyle was an avowed spiritualist, especially in the wake of the Great War, and he was as committed to promoting the supernatural movement as Houdini was to exposing its scam artists. His presence at Houdini's lecture quickly shifts this from being a one-sided presentation to a debate: Is spiritualism real?

To audiences a century removed from the heyday of the movement, who may have only heard spiritualism referred to as a fad or craze, such a debate may sound as compelling as one on the Earth being flat. But early on, Burns and Terry slide in one key piece of context: the Great War and the staggering loss of life it engendered – millions of young men and women killed in a seeming flash. It lets us see the era as one in need of spiritualism, as a way for traumatized families to find closure, to make peace with their loss by actually talking to their lost sons and daughters a final time. That sense of so many broken hearts, such monumental mournfulness, of the necessity for an afterlife, adds some weight to Doyle's side of the debate.

Even so, Houdini has, you might say, the deck stacked in his favor. The illusionist – portrayed here by Terry, ever composed and crisp in his period tux – has a ready answer to every example of true mysticism invoked by Doyle. Glassware and furniture floating in air? Terry's Houdini makes a goblet hover and a table levitate. A psychic displays an uncanny knowledge of people and events unfamiliar to her? Terry's Houdini – well, to be fair, Terry himself – singles out individuals in the house and proceeds to reveal personal details about them and even their thoughts. Messages written on a board by an unseen hand? Terry has audience members secretly pick cards from a deck, then makes the correct card suits & numbers appear in chalk on boards that had been closed. (Remember that thing about the deck being stacked in his favor?) Terry's cool demeanor and facility with the illusions make his Houdini the Man of Reason, able to set aside the human desire for wonders beyond our world and, as if with X-ray eyes, see the trickery that lies beneath any so-called magic. (Though it's worth noting that there are no Penn-and-Teller-esque reveals for the illusions on view here. Terry keeps them mysteries.)

But while Houdini has the edge through most of the debate, Doyle sweeps in at the end with a statement of such power that may sway many observers to his side. He speaks to his own loss, his own deep suffering, that has been eased somewhat by spiritualism – in short, he makes this personal. Burns has wisely chosen Robert Matney to be her Doyle here, and he's so right not only for his natural amiability and decency which lead us to embrace the character, however gullible or foolish we may find him, but also because of the honest feeling he brings to Doyle's pain: It's a white-hot hole in the core of his heart. His Doyle is the Man of Passion, who cannot and will not set aside the beliefs that keep him going from day to day. His final exchange with Houdini, in which he rejects his friend, is electric and, in its way, as full of theatrical magic as those marvelous illusions by Terry. It elevates what could have been a novelty about two legendary celebrities who knew each other back in the day into a true drama, one that makes us ponder the afterlife and, more importantly, life.

Houdini Speaks to the Living

A version of this article appeared in print on October 28, 2016 with the headline: Postmortem 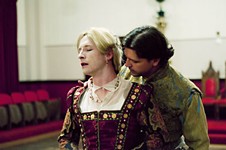 'Rose Rage'
Hidden Room Theatre leads us forward into the past

In Memoriam: Peg Miller
Last call for the big-hearted co-owner of Chicago House