UT Dept. of Theatre & Dance's In the Red and Brown Water 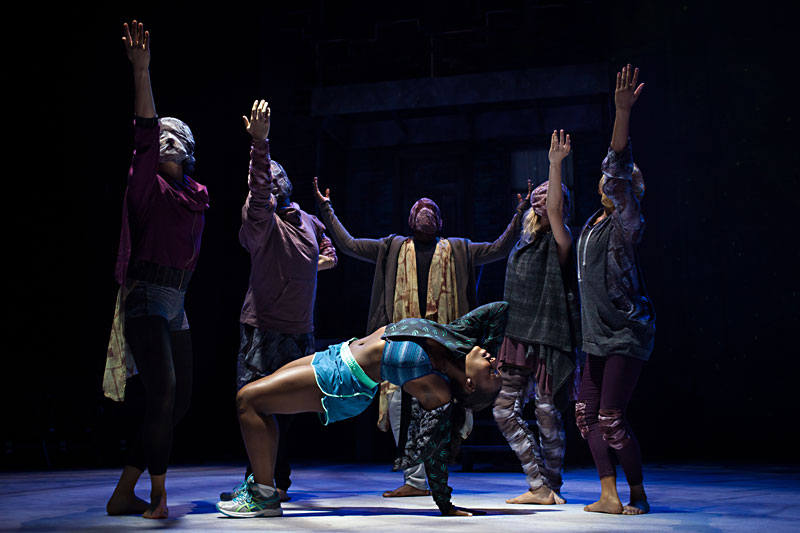 One could be forgiven for expecting something very different than what In the Red and Brown Water delivers. The style of the play is so different from conventional Western storytelling that it's hard for any marketing blurb to do justice to the script's originality.

The play functions in three worlds at once in the University of Texas Department of Theatre & Dance production, co-directed by Charles O. Anderson and Robert Ramirez. First, there's the kind of storytelling that most audiences are used to, with a story and a setting that we can easily imagine. Oya (Christian Henley) is a bright-spirited young woman, a track star with a promising future. Her mother Mama Moja (Cymone Love) is too sick for Oya to leave and take advantage of the athletic scholarship that would give her a path away from the poor neighborhood where she was raised. Oya tries to figure out who she is as she loses more and more of what might have provided her with an identity and a framework for living a full life. The single set (designed by Elliot Gardner) features Oya's front porch in one corner, anchoring the space to themes of home and family.

But that's just one angle. Playwright Tarell Alvin McCraney also inserts an artifice into the storytelling that elevates the narrative. Characters speak their own stage directions aloud. One of Oya's lines reads, "Oya laughs at her crazy mama. You crazy." The technique recalls German playwright Bertolt Brecht's efforts to separate the audience from the immediate emotion of a more realistic performance, to make room for deeper reflection.

On top of that, McCraney's play is infused with multiple mythologies, notably Creole and Yoruba mysticism and folklore. Characters represent different aspects of the divine from the Yoruba religious system. With that, the production encompasses stylized movement and dance, introducing a ritual aspect to the performance. As Shango, one of Ora's lovers, Keith Machekanyanga has a trademark gesture, like a summoning, that he performs when he enters a scene, and Machekanyanga then slides right into (and out of) the realistic physical performance of Shango walking, talking, and seducing. Or, there are the several performers without lines, faces covered, whose movement turns a story about a single young woman into a collective ceremony.

The use of dance in the play embraces all three of these approaches: contemporary, stylized, and ceremonial. It's this smooth exchange of one theatrical style for another that is at once engrossing and challenging for an audience. The visually striking costumes (designed by E. L. Hohn) also reinforce the overlapping sensibilities of the play.

Ultimately, the production relies on the ensemble to bring all aspects into a coherent whole. This is best achieved in the dance scenes that include many performers, when the ensemble discovers which sensibility to embrace in each moment. Though some of the personal exchanges are touching, it's the work of the whole cast that gives Oya's final grief the weight it needs to carry the play.

As the story moves forward, Oya's layers are peeled away from her one at a time. That sense is echoed in the audience's experience. In the Red and Brown Water exists in multiple places at once, and the impact of entering into this kind of artistic experience is ritualistic. It progressively challenges and strips away assumptions. In the Red and Brown Water operates like theatre and like ceremony: It's transformative, unsettling, powerful.

In the Red and Brown Water

A version of this article appeared in print on October 14, 2016 with the headline: UT Dept. of Theatre & Dance's In the Red and Brown Water