The Wordy Wranglers of Typewriter Rodeo

The whole country's saddling up with Austin's vaqueros of verse 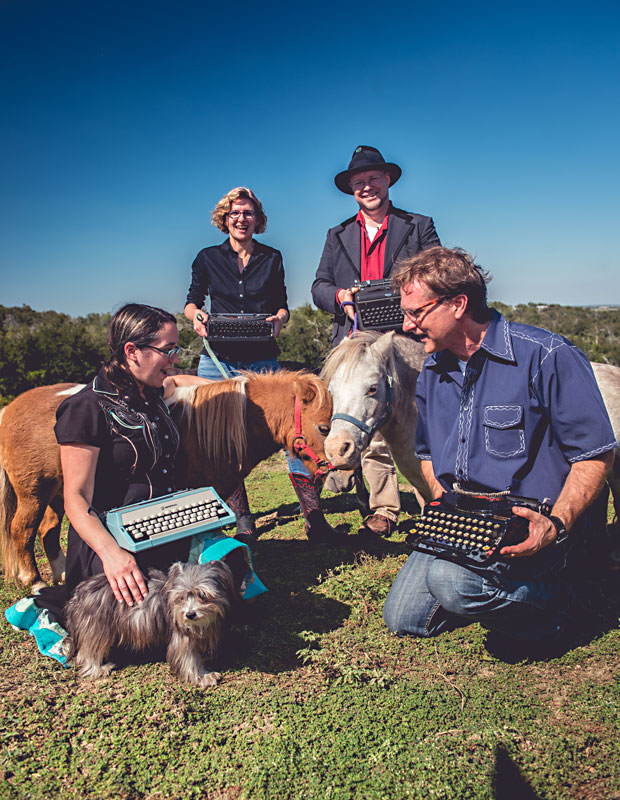 You hear them before you see them, the clickety-clack of letter keys against paper-covered platens signaling a locus of live, literary creation among the mingling crowds: Typewriter Rodeo.

That's Jodi Egerton, Kari Anne Roy, Sean Petrie, and David Fruchter, nattily attired and ensconced behind their vintage writing machines, tapping out custom-designed verses to order, making poems up all extemporaneous for whoever's interested at the festival, the fundraiser, the party, the celebration of anything or everything.

The quartet first got together on a whim in 2013, and in three years they've performed all over the country, have written impromptu poetry for hundreds and hundreds of people – including former U.S. poet laureate Billy Collins.

"He was part of the Nantucket Book Festival last year," says Petrie, "and we were included among the festival authors. And they have parties for the authors, so we met Billy there and kind of got to know him. And, later, we'd set up as part of the Authors in Bars thing, so we were sitting in a bar, you know, having drinks. And he showed up and asked Jodi to write him a poem."

“OK, it’s midnight now, and I’ve had some whiskey, and I need to pull up my memory of Daffy Duck – and spin it into something that I want Billy Collins to read.” – Jodi Egerton

"And when people ask for poems," says Egerton, "they're trying to come up with a subject, and sometimes they're like, 'OK, what stumps you?' And you can't stump me. I have a background in improv, so the weirder it is, the harder the challenge, that's great. It just makes everything bubble up more. In some ways, the hardest ones are more general stuff, something like 'love,' but the more detailed ones are easy. But then Billy Collins sits down across from me and says, 'Daffy Duck.' And I was like, 'Oh, sweet goodness.' My brain was like, 'OK, it's midnight now, and I've had some whiskey, and I need to pull up my memory of Daffy Duck – and spin it into something that I want Billy Collins to read.' It was the only time I ever felt stumped. But I found what I needed to find, and the poem turned out great, and I gave it to him. It felt very much like being in college and having my favorite professor read the paper that I'd worked so hard on for so long. I gave it to him, like, 'H-here you goooooooo ...' But he read it, and he laughed – he liked it, he really did."

And the actress Sharon Stone was also at this Nantucket festival, right? We saw mention of that on Facebook – or was it just a tatter of some journo fever dream?

"She wasn't there as an author," Egerton says. "She'd just come to enjoy the festival."

"And she came up to our table and asked for a poem," says Petrie. "So Kari wrote her one and I wrote her one. Then we saw her at another one of the events we did, at the Westmoor country club, a cocktail-hour thing. And there was a family there that she knew, with a 10-year-old girl who was a writer, and Sharon was encouraging her. And we were like, 'Go ahead, use our typewriters.' So the two of them worked together, writing poems on our typewriters."

"It was so much fun," says Egerton, grinning.

And all of this – like performing on the beach in Mexico, at the Hilton Los Cabos, to celebrate the luxury hotel's reopening after its destruction by Hurricane Odile; and setting up shop in D.C. at the Smithsonian's Museum of American History, in the midst of an exhibition of antique typewriters; and cranking out the belletristic finery at Willie Nelson's Heartbreaker Banquet – started, spur of the moment, at Maker Faire 2013.

"I wanted to do something at Maker Faire that year," says Egerton, "because I was like, 'All my cool friends make stuff, I wanna make stuff.' So it started with friends gathering and brainstorming, like 'We could write things. We're word-makers, we can make things up on the spot. We could write stories, we could write poems!' Then Kari Anne Roy said, 'I have a collection of vintage typewriters.' So we gathered up everyone and the typewriters, we arrived at Maker Faire and set ourselves up in a booth. And we were like, 'OK, we can have one person here, and every two hours we can swap out. And if we get people interested, if we can write a couple of poems or stories, it'll be really nice.' But suddenly there were, like, three lines of people, 20 people thick, and no one had a break the whole day. It was incredible."

"And it was meant to be a one-off thing, too," adds Petrie. "We never planned to be anything other than helping Jodi out. And then people at the Faire were like, 'Do you guys do this at other events?' And we were like, 'Uh – sure! Yes, we do! (Now.)'"

"It was mostly just the four of us then," says Egerton. "Me, Kari, Sean, and David. We had other folks who popped in for a little bit, too; but, basically, it was the four of us."

"I'd actually just met Jodi the month before," says Fruchter. "I'd taken a writing workshop from her, a workshop on using improv techniques to kickstart your writing – done at the beautiful Writing Barn in South Austin. And I have a feeling that I kind of invited myself along to the Maker Faire thing."

"I think of it as I forced you," counters Egerton. "You'd come to hear me say stuff, and I made you work."

"We all knew each other in different ways," says Petrie. "Jodi and I did improv back, like, 15 years ago? And Jodi and Kari knew each other through the Austin Moms thing. And I knew Kari separately, because we both write for kids. So it was a cool thing that came together that way. And the name is from that first day. We were just sitting there, typing, and one of the passersby said, 'This is like a typewriter rodeo!'"

"That night I sent everybody an email," says Egerton, "where I was like, 'Guys, I just bought the domain name! It's a thing now!'"

"Somewhere in the first few gigs we had, there was a transformative moment," remembers Fruchter. "We were typing for a parent party for Olive Tree preschool – just totally for fun, because we'd loved doing it so much at Maker Faire. And we were walking away from the gig, and, unexpectedly, they handed us an envelope – filled with cash money. And I remember looking at that and thinking, 'We're in business.'"

"We never thought it'd go more than one day," says Petrie, "and never thought we'd be doing this and making money, and going all over the country. But now – Boston seems to be our second home, sometimes – we've been there two or three times."

"And we're going there twice more in the next month and a half," says Fruchter.

And these gigs in Boston – in California, in Kansas, and wherever else the group journeys – bring in a decent fee, too, besides covering the Typewriter Rodeo plane fares. "We have rates that vary by the type of event and the number of people," says Petrie. "Where it is, when it is, all of that kind of stuff. We have slightly different fees for nonprofits, too, and work with people's budgets as much as we can." But fees of any kind, for poets, are a bit ... rare, aren't they?

"Definitely," agrees Petrie. "How many poets get this kind of compensation?"

"Mostly you have to pay to write poetry," Fruchter points out. "That's the usual way of things."

But for Typewriter Rodeo – for Jodi Egerton, with her 1970 Litton Imperial; for Kari Anne Roy, with her 1952 Oliver; for Sean Petrie, with his 1928 Remington Portable; for David Fruchter, with that 1941 Royal Quiet Deluxe – the usual way of things is not something that rings their carriage's bell.

"We are very unusual poets," Egerton concurs, her smile bright as a fresh sheet of Hammermill Bond.

A version of this article appeared in print on October 7, 2016 with the headline: Wordy Wranglers