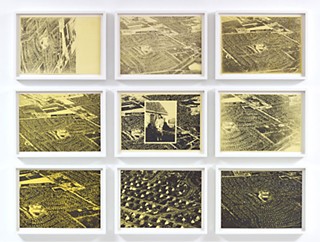 Richard Forster's "Levittown" has four parts: neon signs making the word "Levittown" in the handwriting of his parents, images of waves lapping the shores of his English hometown, aerial views of the historical Levittown ("the first mass-produced suburb in the United States"), and a wallpaper design "based" on the notion of nostalgia for East Germany. All of the images in the show are made from photographs that have been copied and then meticulously rendered in graphite.

There is a lot of historical and conceptual baggage to unpack here. If you would like to research it, the Levittown development happens to have its own Wikipedia page (not so sure about the East German wallpaper). Thankfully, the work itself is visually compelling enough that to appreciate it on its own merit is sufficiently rewarding. Forster's series of Levittown grids, for example, offer ample complexity in a relatively basic format. The series consists of four grids: Levittown, September through Levittown, December. Each grid is made up of nine aerial views of Levittown, hundreds of houses set along winding suburban streets. In the center of the grid is an aerial view with a family photo "pasted" over it. (These are graphite copies from copies of photos, so nothing has actually been pasted.) Finally, each grid is tinted. Levittown, December's photo is of a young woman standing in front of a house, smiling and holding a hat. The photos are sourced from Levittown itself.

That description may be confusing, but as I mentioned, the format is rather straightforward, and straightforward, as it deals with this show, is preferred. It can be easy to get mired in Forster's intellectual crust, and if that is your pleasure, you have plenty to consider here. However, I find that route insulates me from the work itself, which, at its most effective, is direct and even sentimental. At the show's heart is the conflict between the mass-produced and the personal. Levittown itself was a manufactured wasteland, like much of suburbia, but like most of suburbia, it is also a place of people, like the young woman holding her hat. The images may have been made with machines (cameras), then copied and reproduced, but Forster has remade them by hand so that his images, based on those copied photographs, are, in fact, one-of-a-kind.

The personal/manufactured conflict is reiterated by the two "Levittown" signs, Levittown, Mother and Father, made from his parents' signatures. Neon signage is ubiquitous and hardly intimate, but when made to replicate the hand of a loved one, they become mementos. They take on an emotional significance far beyond their technological object-hood. There is a similar resonance to Forster's wish to revisit his hometown, manifested in his triptychs of incoming – or departing – waves. Fundamental to a sense of nostalgia may be a sense of loss, and what could be more symbolic of loss – the fleeting nature of all things – than a wave?

It is very possible that Forster himself would find my reflections way off-base, but I'm not bothered by that. It is the viewer's right to determine his or her own relationship to the work being engaged with. In this case, I am moved by Forster's willingness to complicate the common perception of American suburbs which, at least in the last few decades, has been one of disdain. It's easy to intellectualize the shortcomings of suburban sprawl, but in reality, as with most human endeavors, it is a far more complex – and far more interesting – matter than it may at first appear.