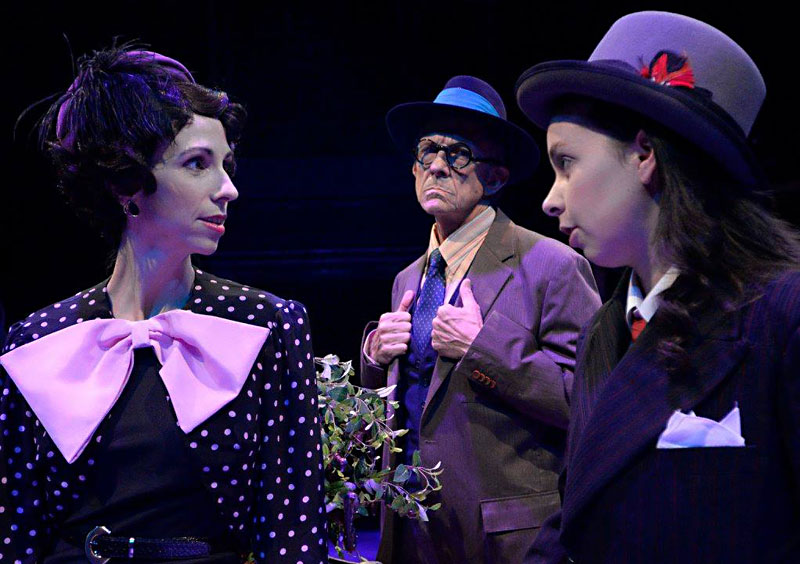 If ever there was a case for letting sleeping dogs lie, it's The Resistible Rise of Arturo Ui. At the outset of playwright Bertolt Brecht's "gangster spectacle," the Al Capone wannabe of the title is in virtual hibernation from having seen so little illicit activity lately. The lack of mayhem and the attention it gets him have Ui so far down in the dumps that he's hardly making trouble for anyone at all. But a sharp snub from the highhanded power brokers of the Cauliflower Trust, masters of the Windy City's vegetable trade, pokes the mobster back into action, and he seizes on a new protection racket like a dog on a bone, one he won't let go until he's squeezed green out of every greengrocer in Chicago in exchange for keeping them "safe." Unfortunately, each new slice of territory Ui conquers fuels his desire for more, sparking a citywide turf war, which also fuels Ui's paranoia, leading him to take out anyone he sees as a threat, even those who helped him climb to power.

Both the story and the pathology should be familiar to anyone who's ever caught Cagney or Pacino gunning his way to the top of the mob, but Brecht had more on his mind with this play than the tommy gun-toting thugs of American cinema. Writing it in 1941, he was explicitly taking a sidelong shot at Adolf Hitler and his recent political ascent in Germany. In fact, each scene and key character in the play corresponds to an incident and person in the Fuhrer's history. By replaying the actual events but in the heartland of the USA, Brecht was sending the message to complacent Americans that what happened in his homeland could happen here. Even as he was ridiculing and belittling the Nazis and their cause onstage, making them literal crooks squabbling over cauliflowers, he wanted the threat they posed to be palpable, to send a chill through the audience.

You can sense some of the same impulse running below the surface of this production from the Mary Moody Northen Theatre at St. Edward's University. There's no orange hair to be seen here, no squinty eyes or pursed lips; still, when one hears Ui mutter "Who the hell cares what professors think, or city slickers, intellectuals? What counts is what the little hick imagines bosses act like," or insist that the people be able to choose their own protectors freely, adding, however, that once they have, "they might as well give up a bit of freedom to those they've chosen freely to protect their freedoms," one feels the unsettling presence of another figure in the theatre, a figure of like temperament to this gangster, someone currently gunning for the most powerful post in the land, and it makes this play feel not simply timely but chosen quite deliberately to speak to this moment in time.

That earnest resolve may account for the overall gravity of tone here. Brecht has left ample space for open mockery and an air of acerbic satire, but director David Long keeps most of the proceedings as somber as the black umbrellas that open like blooming poisonous flowers in the show's eerily lovely first moments. The danger posed by Ui and the corruption that engulfs Chicago like fog off the lake are always on the surface, overt, like they'd be in a mafia movie or Shakespearean history. Indeed, with the constant parade of quotes from the Bard and riffs on his sayings ("Is this a Luger which I see before me?"), the show feels closer in spirit to a staging of Richard III than The Threepenny Opera. Adding to the charged atmosphere are the richly dramatic lighting by Natalie George, ominous sound design by K. Eliot Haynes, and even the exceedingly handsome Thirties-era costumes by Susan Branch Towne: The actors wear their pinstriped suits like armor, their fedoras like helmets essential for battle.

The gloom is cut chiefly by the music, with composer Peter Stopschnski leading a speakeasy trio on a handful of upbeat jazzy breaks, which also showcase the considerable vocal skills of Emily Ott, the show's Barker. But there's also a happily subversive quality to Arturo Ui, thanks to Victoria Jimenez. With most everyone onstage at least a head taller than Jimenez and her demeanor as Ui typically composed and subdued, she makes this goon look about as menacing as, pardon the term, a lapdog. But in a heartbeat, her Ui can turn with a ferocity that belies her size, like one of those adorable terriers that suddenly erupts into bared fangs and rabid barking when you get too near. Jimenez's Ui can be comical and easy to underestimate, but there comes a time with her when you know you've ventured too close. Then you wish you'd let that sleeping dog lie.

The Resistible Rise of Arturo Ui