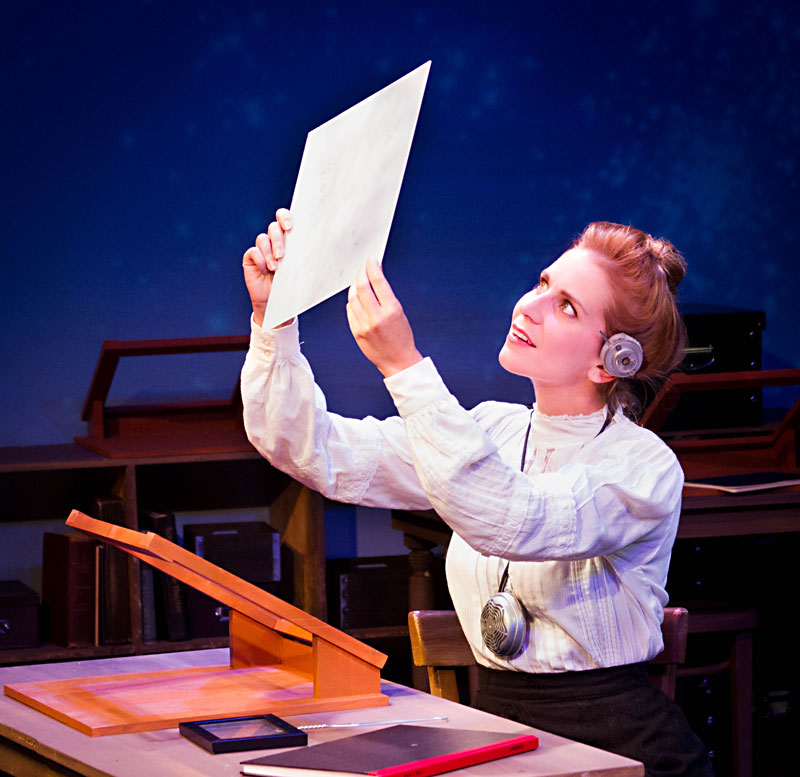 A bright speck in a field of darkness. It can be hard to judge how close the light is with so little to go by. What you assume its distance to be may be 10 times that in actuality – or a hundred times, or a million. Then again, it could be half the distance you imagine or less, closer than you thought possible. That's the issue at the heart of Silent Sky, a pinpoint of brilliance in the theatrical firmament given a luminous staging by Austin Playhouse.

In this historical drama by Lauren Gunderson (Exit, Pursued by a Bear), stars are Henrietta Leavitt's passion – a word she employs with specificity and purpose. The study of those gaseous spheres filling the cosmos inspire in her "a thrill – a bracing excitement," and she wants desperately to know how far from us they truly are – in measurable terms – so she can learn how large the universe is. But for a young woman in 1900, a career in astronomy is as rare as a solar eclipse, and the closest she gets is a job at Harvard as a "human computer," scrutinizing the photographic plates taken with the university's Great Refractor telescope and cataloging the stars on them by their brightness. As all the computers hired by observatory director Edward Pickering are female, the group is jokingly dismissed as "Pickering's harem," but as history showed, and Gunderson reiterates here, the women doing this work were skilled astronomers who made more substantive contributions to the science than most of the men overseeing their work, with Leavitt making the greatest scientific leaps of all.

A play about stellar classification and cosmological measurements may seem light years from your interests, but this one might be much closer to you than you expect. Much of the reason has to do with that passion driving Henrietta, an enthusiasm so spirited and joyful as to be infectious, and we catch it here not just in Gunderson's fervent dialogue but also in the vibrant performance of Molly Karrasch. From the moment the actor opens the play rhapsodizing about stars, her eyes catch the light and look to contain their own celestial wonders. The ardor and fascination that Karrasch's character feels for the cosmos is conveyed with such purity and constancy that it's hard to resist – and, indeed, one by one, the play's other characters are won over by it: Henrietta's sister Margaret, who tries to talk her dear sibling out of leaving their Wisconsin home; Williamina Fleming, the good-natured Scots housekeeper turned Harvard computer, and Annie Jump Cannon, stern head of stellar photometry, who eye the newbie Leavitt warily; and Peter Shaw, the male astronomer who's perpetually intruding on the computers and paternally telling them their work simply isn't as important as the men's. Ultimately, they all give in to Henrietta, in part because they come to recognize her brilliance as a scientist but also because they see in her someone whose heart is as open as the sky and warm as the sun. The four actors sharing the stage with Karrasch do a lovely job of revealing their characters' respect and affection for Henrietta. There's the deep admiration in the gaze of Claire Grasso's Margaret, the motherly pride beaming from Cyndi Williams' Williamina, the stillness that comes over Samuel Knowlton's amiably awkward Peter as he expresses his true feelings for Henrietta. Babs George gets the play's best line when her character, the initially no-nonsense Annie who warms considerably over time, tells Henrietta what she means to her; in an ever-changing universe where space and time are bent by forces known and unknown, the speed of light is that rare immutable, and, George says with a tenderness to draw tears, "I choose to measure you in light." It's a moment that draws the universe into the theatre and makes it at once vast and intimate.

That's the beauty of Gunderson's play and Austin Playhouse's staging: In them is a light that illuminates both the far and near, that invites us, as Henrietta says, to take comfort in being a small part of something vast and to appreciate, as in the hymn "For the Beauty of the Earth," sung sweetly here by Grasso, the catalog of creation's wonders. Under Lara Toner Haddock's sensitive direction and the five performances that form a lovely constellation, this lyrical tribute to Harvard's women astronomers and their calling succeeds in being "for the glory of the skies."

A version of this article appeared in print on September 30, 2016 with the headline: Star Struck