"Elliott Erwitt: Home Around the World" at the Ransom Center 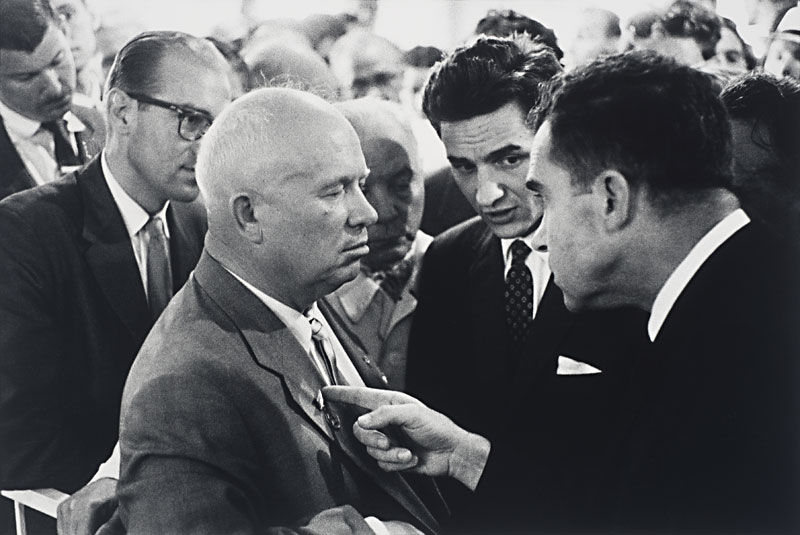 Elliott Erwitt's 1959 photo of then-Vice President Richard Nixon and Soviet Premier Nikita Khrushchev shows Nixon jabbing a finger into a disgruntled Khrushchev's chest. Nixon's chin juts forward; the tendons in his neck are strained. The image appears to show an American capitalist warrior standing up to a Communist foe and putting the Soviet menace in his place. The photo tells a great story, though most seem to agree that the two leaders were not talking politics at all, but something much more mundane (one source suggests the two were having a friendly debate over the merits of cabbage soup). Whatever they may have been talking about would turn out to hardly matter, as the image would go on to become a powerful piece of propaganda for pro-capitalist, and perhaps more fatefully, pro-Nixon constituencies. Even considering the more generally accepted, and more banal explanations for the image, it is difficult not to get caught up in the juicy narrative. Erwitt seems to have captured the perfect moment.

What strikes me about Erwitt's images is his ability, like Norman Rockwell, to tell a complete story with a single picture. The photo of Nixon and Khrushchev leaves no questions unanswered, and for this reason, it is quite gratifying, like a meal that is just the right size. However, what works for the cover of a magazine (Erwitt's photos appeared in many major publications, including Life), doesn't necessarily translate into soul-searching. While Erwitt has been a talented photographer, with a keen eye for the charisma of his subject, he appears to have been engaged by only the most obvious and consumable details. This would explain his long-lasting marketability. Of course, while I may demur from work that so unabashedly appeals to my most superficial interests, the mass media does not.

Erwitt's work has great value for what it says about the culture of America during the heyday of his career, in particular the Fifties and Sixties. It hardly seems necessary to go into much detail about his portraits of Marilyn Monroe, for instance, because an American audience, even now, will already have them stamped into its collective memory. Her hair is gold ringlets; her lips are parted, head back, neck exposed. I could go on, but why? We are quite aware of what Monroe looked like, in large part because of Erwitt, who contributed to the canonization of her uncomplicated magnetism.

It's the "uncomplicated" part that is troubling. Monroe was so photogenic, and photographers like Erwitt so talented with her narrative, that the iconographic force of celebrity couldn't help but overpower the subject herself, who would eventually succumb to her own success, having been forced into a perfect mold, despite her woeful imperfection. Erwitt's images of Monroe, JFK's funeral, the Iowa State Fair, the streets of New York, and more, are brutally seamless. On their own terms, they're impossible to deny, and this is what makes them compelling, as well as frightening. I doubt that audiences in 1959 were aware that they were being convinced by the Nixon photo to vote for him. In the same vein, I can't help but wonder what American audiences are being convinced of now, with an even more sophisticated media. As a study in narrative, popular culture, and American propaganda, the Ransom Center's "Elliott Erwitt: Home Around the World" is a crucial experience. Because while Erwitt's images are a true pleasure to see, they are also urgent lessons in self-preservation as we both celebrate, and interrogate, the American Dream.

"Elliott Erwitt: Home Around the World"