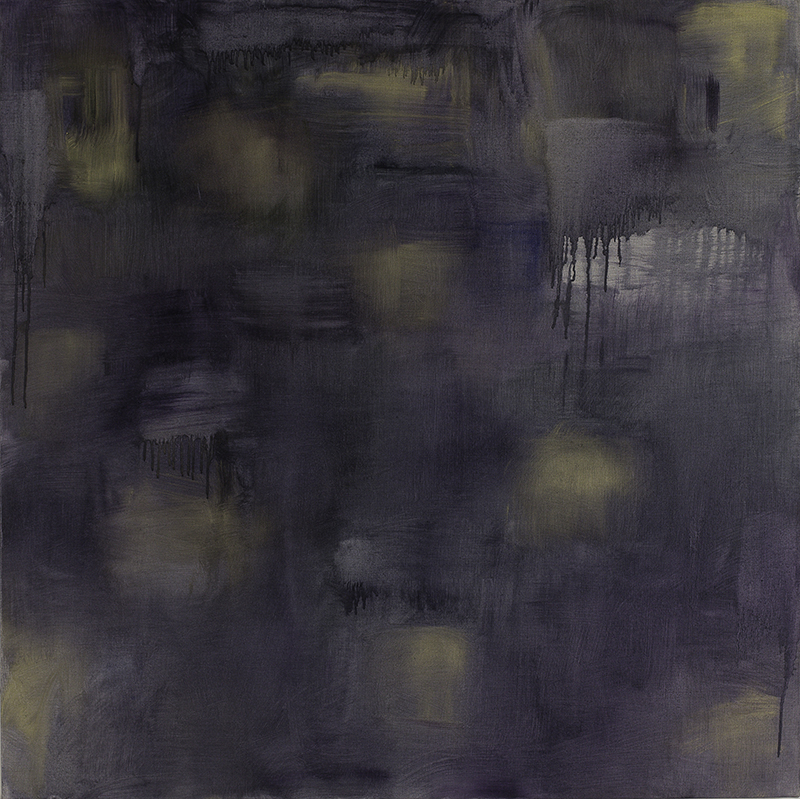 I don't want to be too prescriptive about what is happening in Sydney Yeager's Untitled IV. It could be anything, and I suppose that's part of the point. The image is dark, a rectangle of streaks in black, red, and white variations. The surface seems scratched up, marred, like a Francis Bacon without the macabre popes or meat. Untitled IV eschews anything figural, unless I count my own reflection in the glass frame. What I see is a waterlogged cityscape, like an Impressionist painting of Broadway in Manhattan, light and dark commingled into an abstraction of skyscrapers, brightened signage, and traffic, transmitted through a haze of rainfall running down a window pane or car windshield, or taken in from a balcony through the kind of heavy downpour we've had in Austin the last couple of weeks. I prefer the cityscape interpretation to the Bacon one, only because I enjoy the optimism of Yeager's images, and I find cities optimistic, bustling with promise, even at their grittiest and most unforgiving. That optimism is communicated by Yeager's textures, a theme that runs through all of the work in "In Other Words," her half of "Engaged in Conversation." Even a piece like Untitled II, a slate and gold surface married with whites and grays like wisps of smoke, contains exuberance, though nothing overt. It's an inner confidence – a satisfying balance and energy that may best be termed "charisma."

The other half of "Engaged in Conversation" is Katie Maratta's "The Next Small Thing." Each piece is a minutely detailed, carefully composed skyline on a long, thin panel similar to a yardstick. The images are largely West Texas landscapes, though there is at least one piece that includes the Austin skyline. While Maratta's skies are finely rendered and dramatic, I'm mostly interested in her depictions of architecture, especially that mundane architecture that has come, for good and for bad, to define so many of my road trips. Texas Night Horizon, for example, is mostly darkness with unidentifiable pinpoints of light in the distance. It should be a familiar sight for anyone who's taken a long drive in Texas (or really anywhere in the middle of the country). There is darkness and then, all the way to the right of the panel, a galaxy of lampposts and neon signs, most prominent being the immense Dairy Queen logo. It is odd how something so average and ubiquitous as a chain restaurant sign can come to seem almost glorious – like an oasis – in the context of a neverending highway. Stormy Whataburger is the same. It is a gathering of familiar businesses along a single main road in the middle of nowhere. Like the Dairy Queen sign, the Whataburger W rises above the horizon, a lighthouse or big waving hand saying, "Welcome home." It's a little hilarious, actually, but also sober, an effect rendered by the muted tones and by Maratta's deft attention to the minutiae of her subjects. They could be photographs, but really, they're far more interesting than that, more imperfect and unpredictable, the way things look in real life.

I don't think I would have seen cityscapes in Yeager's work without also having seen Maratta's. Certainly, other connections between the two halves of "Engaged in Conversation" can be made in addition to that one: The attention to surface comes to mind, as well as the homage paid to emptiness. But any number of lines may be drawn between works so formally divergent. This is part of the pleasure of looking: to locate in the apparent what may otherwise go unfound. – Sam Anderson-Ramos 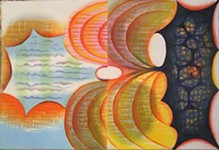