This solo version of Woyzeck is a fresh, compelling take on Buchner's play, powerfully performed by Joey Hood 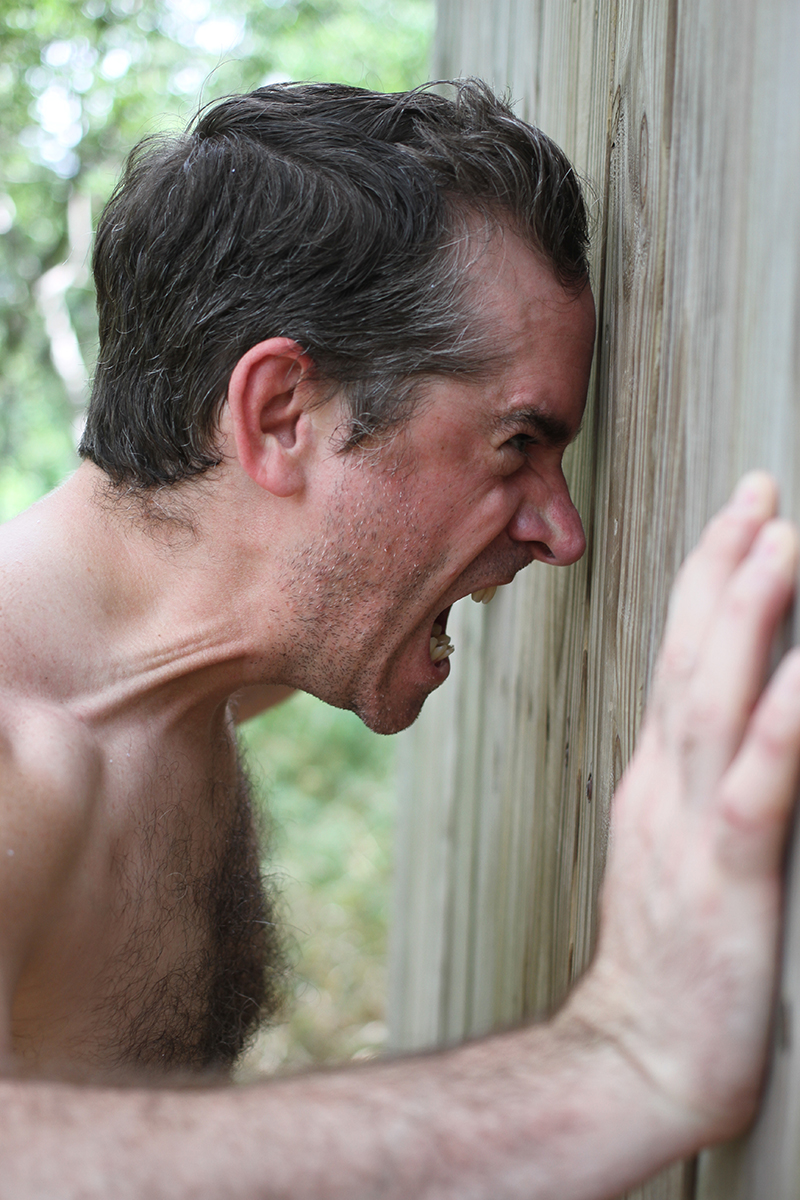 More a letter than a human: Joey Hood as W. (Photo by Jared Slack)

A stark hallway, dimly lit by the glow of thin, utilitarian lightbulbs dangling from the ceiling, leads into the haze-filled space at Trinity Street Theatre. A throbbing, ominous tone vibrates in a rising and falling pulse, providing an immediate tactile connection to a sense of foreboding as the bass sets into the bones. Through the haze is projected a grainy image onto a large white sheet, itself obscuring some unknown set-piece; indeed, the whole of the set is covered in sheets, suggesting – along with the projected image and accompanying sound of an old film projector – that either this is the end of something or something is about to begin. Something old or something new.

We're going to get both.

Georg Buchner's Woyzeck is a play with many possibilities, depending on which scenes are included or omitted, and even which scene begins the story. Its history is interesting; Buchner didn't finish the play before his death, leaving room for its posthumous completion and interpretation by many artists, who often shuffle scenes around or leave some out to fit the particular statement for which their production is aiming. With W., we are immersed in a one-man Woyzeck, with seven characters (well, eight, counting a monkey) played by Joey Hood. With a translation by John Robert Hood Jr. and adaptation by Zachary Christman, this version takes just over an hour to tell the tale of a young soldier for whom the world has nothing but contempt. W. at first simply exists, allowing things to happen to him: His commanding officer thinks him a buffoon lacking morality, his girlfriend (and mother of his child) treats him with a general disdain while fawning over another soldier (the drum major in the original), bearded and handsome. W. is part of a medical experiment as well, forced to eat only peas for months by a doctor who regards him merely as a subject – more a letter than a human. With great care, Christman crafts an intense narrative displaying the result of a man pushed too far, without forgiving him for his crimes.

Hood's performance is simply captivating. His subtle changes in body and voice allow for seamless transitions between characters, never once slipping into caricature, fully embodying each character as a separate, established entity. To say he makes it look easy would be accurate, though not an appropriate recognition; it is the type of performance into which the most painstaking preparation and detail is obviously poured, and that level of work should be acknowledged and respected.

Hood is not alone in creating the rapturous and intense experience, however. Director Adam Roberts has wisely chosen to pay great attention to every element in the crafting of this production, and it shows. Scene changes are accompanied by short film clips by Jared Slack: jarring and quick cuts of Hood succumbing to madness and rage, wandering through the woods. Scott Ferguson's scenic design is simple and direct, leaving many of those set-pieces covered with sheets, and allowing other elements to coalesce almost into a character unto themselves. Jenny Lavery's lighting design, for example, beautifully harnesses the ever-present haze, using gobos to create intricate and purposeful shafts of light throughout the story – either unfulfilled rays of hope or bars on the cell of W.'s mind. Tyler Mabry's sound and music often accompany scenes as well, enhancing the emotional connection brilliantly; this choice can frequently distract when it's used as a trick to point the audience toward a particular emotion, but here it is stunningly well-executed.

This Austin Jewish Repertory Theater production is satisfying and thoughtful on all fronts, providing an engaging and fully realized experience. The one-man element challenges us to consider whether this is all happening in W.'s mind, either before or after the fact included in the play's crux. Either way, W. is a compelling take on Buchner's work, fresh and inspired.

Austin Jewish Repertory Theater's The Art of Remembering
In Adina L. Ruskin's play, AJRT offers an intimate look at how memories shape us