The vehicle crashes in this solo exhibition, artfully drawn in graphite, manage to contain both peace and a madness

It's difficult to locate a thread weaving through Rachel Wolfson Smith's "Midas." After some struggle, I came to understand that this is because the threads are multiple. They intertwine and disperse, allowing a viewer to settle on one, only to be forced to decide, much like the motorists in Smith's work, which road to take forward. This dizzy noise of symbols, histories, and meanings ultimately resolves itself in a warning suggested by the show's name: Beware greed's warped idealism. All that glitters is not gold.

The mural-sized Monsters takes up the bulk of two walls. Like all of the work, it is graphite on paper. Collisions and vehicular mishaps take place in each of Smith's images, but the pileup in Monsters is notable for its size, as well as for its conspicuous lack of people. It is as though the bodies have been removed, or as though the drivers and passengers, having had their accident, simply chose to walk away from it. From far off, the damaged cars, resting at odd angles and in various degrees of hurt, seem as serene and sculptural as Stonehenge. A Hummer's back wheels are buried in the roof of a sleek sports car. The only human figure is the one striding on the crosswalk sign at the scene's center. Hanging above it all is a bright, full moon in a field of darkness.

Upon close inspection, the composition and drama of Smith's storytelling give way to sweeping pencil and eraser strokes that give Monsters – and every other work in the show – a frantic confidence and immediacy that is, to be honest, a little awe-inspiring. Smith's deft technique manages to communicate the trauma of a crash while also preserving the minute preciousness of a starry sky. This skillful application of dark and light gives Smith's crashes a peace, and a madness, that is both satisfying and unsettling.

The most prominent theme here, in addition to vehicles and crashes, is motorcycle racing (an actual motorcycle is posted at the entrance to the gallery). This is where things get tricky for me, and in the best of ways. There are multiple good examples, but my favorite may be Carnival, a 15-by-15-inch piece cut in a circle. Motorcycles and their riders flip and pile in a mangle of body and machinery, wheels, spokes, and racing numbers. Every available moment of background, including all of the sky, has been covered in glittering gold leaf. It's a seductive image; it beckons like a religious altarpiece. I may have no particular interest in motorcycle racing, but it doesn't matter. Smith's composition and eye for the odd counterintuitive detail make Carnival an enticement. I'm teased in, and once I'm there, the unraveling can begin.

My lack of motorcycle knowledge is one reason I find myself having to take some twists and turns to grab hold of Smith's multiple messages. How can I reconcile the anonymity of the racers like aliens in their helmets with the gold leaf, then with the fetish of racing, then with the mundanity/terror of the pictured collisions? I must clarify that this is a special experience. Good artworks mirror life's complexities. They draft questions with myriad answers, some obvious, others mysterious, and some beyond even language to comprehend. I had planned to spend more time here with Smith's questions, but I have nowhere near enough space. That is the highest praise I can give. 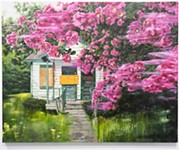 Eastside's Past and Present Revealed in John Mulvany's Latest Exhibit
"Secure the Perimeter" at grayDUCK Gallery asks, “What if the outside force is an inside job?”