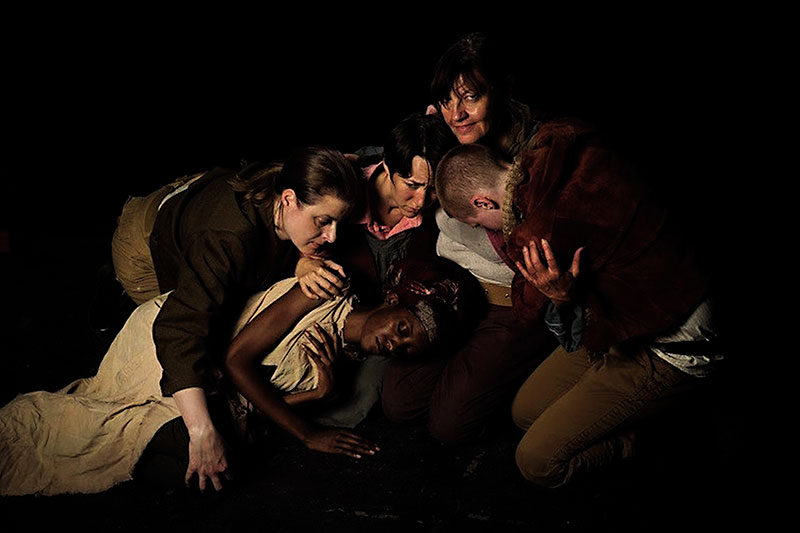 The idea came from a joke. Playwright Eva Suter and director Rudy Ramirez were guessing at what was left as far as interpretations of Shakespeare and landed on "lesbian Othello in space" as the only remaining untouched ground. As with many of the best ideas, from that playful spark came the fire that is Hold Me Well.

In its Shrewd Productions premiere, Suter's script replaces "space" with a dystopian Central Texas in which an undetailed disaster some 17 years prior killed every male on the planet. The only traces of these "Gone Men" are their "seed" – remaining stocks from sperm banks – and the memories held by the women who loved them, particularly on each year's "Remembrance Day." A handful of women inhabit an outpost near Killeen, charged with guarding one of the precious, dwindling stockpiles of sperm. They are led by Elizabeth Mason's intense and authoritarian Odele, a general in the Legion, presumably the remainder of the U.S. military. (Killeen is home to Ft. Hood, so this makes sense.) A threat looms in the form of the Cessationists (or "Cessies"), a faction bent on finishing the job the disaster started: destroying the remaining genetic material and letting the human race go extinct.

Suter integrates the plot devices of Othello in compelling fashion. The character names are cleverly adapted, and some elements are changed to fit a motif focusing more on love, jealousy, and betrayal than race and prejudice. To call Suter's work an "interpretation" of Shakespeare's story wouldn't be quite accurate; what we have here is more a repurposing of those plot devices to fit this already engaging story. Mason's Odele (Othello) has her Desdemona in Hayley Armstrong's Des, whose innocence and willingness to love in these turbulent times inspires hope. Iago is replaced by/combined with Emilia in Amelia, played by Ellie McBride, whose rock-solid performance justifies her character's need for revenge on Odele due to an event pre-disaster, while showing her still full of love and compassion for the women in her world. Casey (Cassius) is a torn young woman, yearning for a place of honor with Odele, yet still grappling with her affection for Des, with whom she shared a Sapphic awakening some years back. Emily Rankin fills the character completely, conveying both strength and naivete with ease. And though Raquel is closest to Roderigo, the character feels more like a new addition, and Taylor Flanagan wonderfully charges her with a dilemma over remaining in the status quo or fleeing to a would-be haven in Corpus Christi run by "the Sisters," another faction in the world, but looked on as a foolish cult by the other women in the Killeen outpost.

The most interesting aspect of Suter's work is her approach to its feminist themes. Absent a gender dynamic, Suter plays authentically with ideas of civilization without patriarchy. The world she's crafted is no matriarchal utopia that's better off without men; it's crumbling because of the stunning and sudden decline in population. And the women depicted here miss the men – their fathers, sons, brothers, husbands, and lovers. They honor them as souls lost to calamity. They find solace in companionship, honoring one another as survivors, each a part of a new world, trying to find their place, hoping to continue the human race however possible. Ramirez's direction reflects this thinking, from the play's first moment of discovery to its stunning conclusion (departing from Othello in all the right ways). Ramirez focuses on the script's painstaking attention to the many forms of love these women have for each other.

My description of the plot has been kept simple on purpose, touching on only its key elements so as not to rob you of the joy of discovering how this story unfolds in detail. And overall, Hold Me Well can be summed up in a simple word: beautiful.

The Off Shoot, 2211 Hidalgo
www.shrewdproductions.com
Through Aug. 7
Running time: 2 hr.
A version of this article appeared in print on July 22, 2016 with the headline: Hold Me Well