Book Review: Review: Good as Gone: A Novel of Suspense 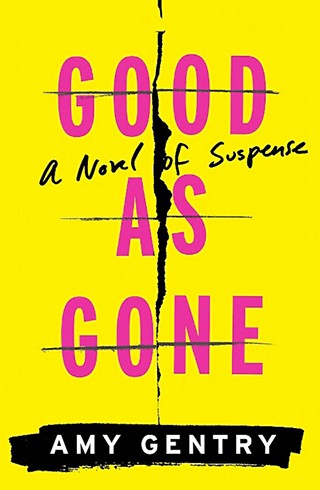 This Houston-based psychological thriller presents a literary junction where entertainment meets empathy. A mother, a daughter, a zealot, an investigator, a family, a stripper, and more than a few survivors lay the riveting groundwork, but it's Amy Gentry's realistic portrayals of victims and their families that set Good as Gone apart from other page-turning crime dramas.

Like Jennifer Dubois, who based her successful 2014 novel Cartwheel not so loosely on the Amanda Knox story, Gentry incorporates a few details of a famous crime case into her debut. Main character Julie Whitaker resembles Elizabeth Smart – "a girl, blonde, beautiful, and pink-cheeked. Perfect," who was also taken at knifepoint from her home while her family slept. But from Smart's harrowing real-life tale, Gentry's story veers off into other directions to become something completely original. It introduces a dueling protagonist, Julie's analytically charged tiger mom, Anna, who offers an insider perspective on the aftermath of trauma. Years after the abduction, a weary traveler turns up on the doorstep of her childhood home, and her family is shocked to find it's Julie. They embrace her return ... at least at first. Thanks to the inevitable thriller story wrench, an investigator's questions pair with Anna's nagging doubts to icepick a hole right through Julie's joyous reunion.

Gentry employs parallel storylines that set the women's stories on a shared track, moving like trains on a collision course, gradually gathering steam until they're playing a game of high-speed chicken. The use of alternating points of view lends insight where strictly first-person or third-person perspectives might limit the scope of the story. Here, the reader falls down a rabbit hole of fractured psyches, bumping branches laden with intricately fragile relationships all the way down. "Starr ... found that being brighter on the outside meant, paradoxically, making an even darker hiding place for herself on the inside."

The careful but bold considerations of the multifaceted experiences of abuse victims and their loved ones are a testament to Gentry's real-life work in the field as an advocate and add a humanistic touch to what might otherwise be a straight-up thriller. At times, the language is a bit simplified, as if pared down from an earlier draft – a quality evident in comparison to several linguistically powerful passages. Still, Good as Gone is never gratuitous, even as it takes us from the headlines into a hell that we hope is only ever imagined. The end result is a true "novel of suspense": a book that's hard to put down not only because of our investment in the plot, but also because of our investment in the lives of the complicated characters.

Good as Gone: A Novel of Suspense