At the end of a tragic week, this group of gifted African-American women reached for grace and tendered it to us 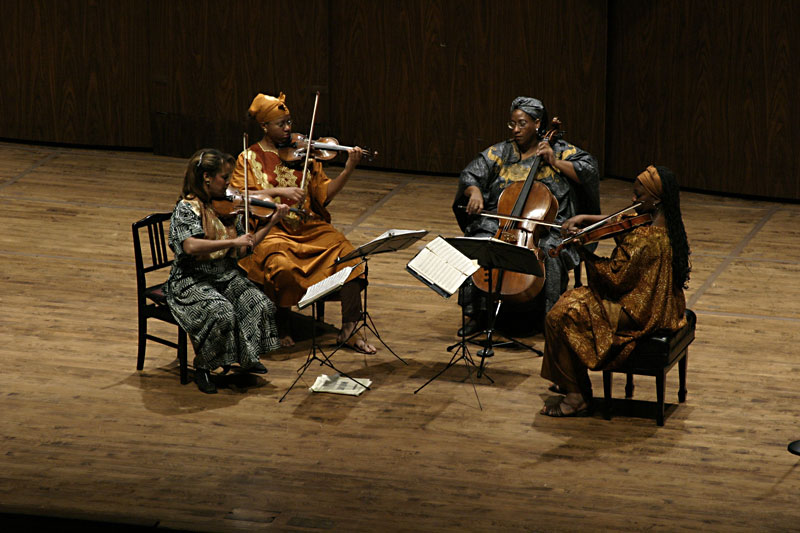 When the Marian Anderson String Quartet took the stage at Bates Recital Hall on the afternoon of July 10, no statement was made about the traumatic events in the days leading up to its Austin Chamber Music Festival concert. None of the Bryan-based ensemble's members mentioned the killings of Alton Sterling in Baton Rouge; of Philando Castile in St. Paul; of Lorne Ahrens, Michael Krol, Michael Smith, Brent Thompson, and Patrick Zamarripa in Dallas. Nor did they address the people wounded in Dallas, the grieving loved ones of any of those murdered, or the nation mired in sorrow and woe as a result of these shootings. But when they played, ... oh, when they played, these musicians seemed to be speaking directly to the suffering of the week, the pain felt in ways specific and general, direct and indirect, throughout the country. In a time of heartbreak, they offered a balm.

In opening with Joaquin Turina's The Bullfighter's Prayer, the quartet tendered a genuinely spiritual gift to those present. The profession of the titular figure and the composer's Spanish heritage might suggest an impassioned, even aggressive work, but while it does burst out of the gate with some lively buzzing, its overall tone is indeed prayerful. Turina gradually settles into a place that's restrained, reserved, contemplative, pastoral, with a pace that at times approaches languor – it's very much a piece for a Sunday afternoon. As they played its final passages, with the volume diminishing and the strings all ascending the scale together, their sounds going higher and softer, softer and higher, the members of the quartet seemed to be reaching for some kind of grace, and the effort was as sweet and soothing as a hand laid gently upon your cheek.

The effect was accentuated by the pronounced sympathy with which the quartet members played with one another. One would sing out a melodic line by herself, and in the next moment she'd be joined by a companion, echoing the tune and, more importantly, matching it in tone and expressiveness, as if to say, "I feel you, sister." It was heard throughout the afternoon: in the Turina when second violinist Nicole Cherry followed first violinist Marianne Henry, in the first movement of the Mendelssohn String Quartet No. 2, when Henry picked up a line from violist Diedra Lawrence – the quality of the sound moving beyond that of skilled musician and skilled musician to a place of compassionate and solicitous friends. Listening to that in the exchanges between two players and in those places when the foursome united to create that feeling (with Prudence McDaniel's cello always the rock anchoring the group) – as in the sweeping, lyrical opening to the Mendelssohn's second movement and in its gentle, tender ending – we felt drawn into a community to which all belonged.

That community was made explicit in the quartet's final piece, Follow the Drinking Gourd, a recent composition by Jonathan McNair inspired by the folk song that's said to have guided slaves to freedom along the Underground Railroad. Woven into the work, alongside its narrative text and quotations of spirituals such as "Go Down, Moses" and "Sometimes I Feel Like a Motherless Child," are choruses of the song, which the audience was invited to sing. Narrator Bruce Van Alstyne, in relating the saga of a few escapees heading north from Alabama to the Ohio River, preached it with such booming authority that he transformed Bates into a sanctuary and us into his congregation. We felt inspired to sing and sang with one voice.

No, no one spoke of Dallas, St. Paul, or Baton Rouge on Sunday – or of Ferguson or Baltimore or any of the other communities that have been linked with racial injustice and violence of late – but how could those of us listening to the Marian Anderson String Quartet that day not be mindful of those places or the pain connected to them? This is, after all, an ensemble whose name honors a great African-American musical artist who was barred from singing before an integrated audience in Constitution Hall in 1939. And this group was playing on the campus of an educational institution that in 1957 barred another great African-American musical artist, Barbara Conrad, then a student at UT, from singing opposite a white student in an opera. And the final work they performed that day addressed the so-called "peculiar institution," slavery, and its oppression of blacks in this country. This is an ensemble with a deep sensitivity to the need for racial justice, but it seems equally sensitive to the need for healing, for unity, for release from the bondage of hatred. On Sunday, the Marian Anderson String Quartet provided solace and pointed us toward freedom. Let us follow the drinking gourd.