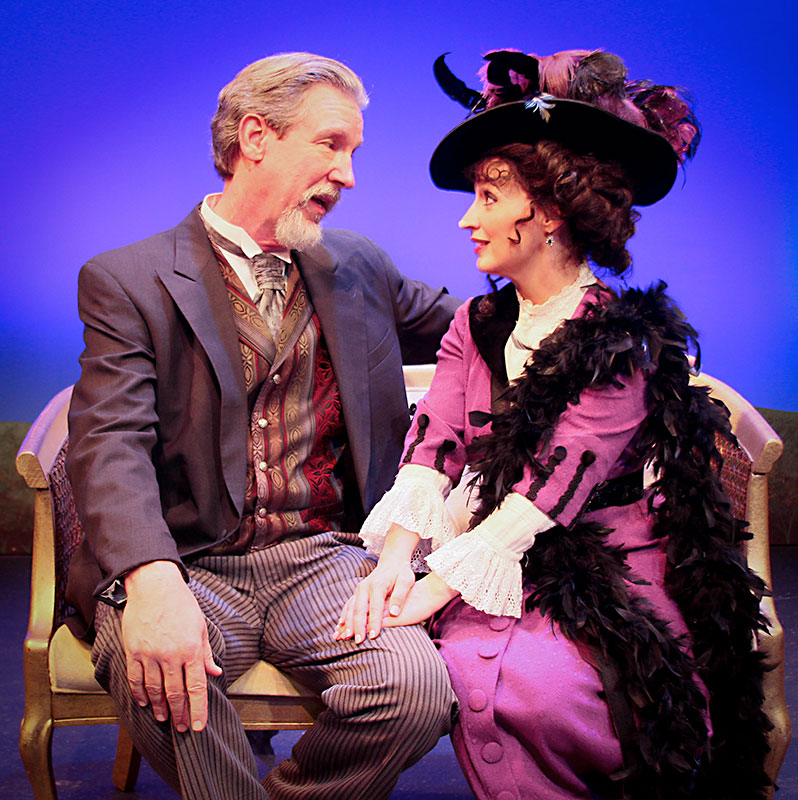 Not exceedingly fond of musicals and embarrassingly unfamiliar with Stephen Sondheim, I worried how to approach reviewing A Little Night Music. As it turns out, one needn't be either fond or familiar to appreciate the work – though I suppose that's true of many things. The themes within this early Seventies effort by Sondheim (music & lyrics) and Hugh Wheeler (book) aren't quite universal but are (perhaps unfortunately) universally understood, and Austin Playhouse delivers a production that's solid, though somewhat by-the-numbers.

A Little Night Music was inspired by Ingmar Bergman's 1955 comedy Smiles of a Summer Night. When considering the era in which that Swedish film was created, it's easy to understand the theme of rich, white people indulging their sexual hungers with little to no consequence. It's a bit harder to swallow now, but Artistic Director Don Toner eschews agenda, embracing the story for its entertainment value and, of course, the music.

The plot is complex enough to create some comedic confusion: In turn-of-the-20th-century Sweden, middle-aged Fredrik Egerman (a rather dashing Huck Huckaby) is recently wed to Anne (Sarah Becker), nearly 19 and still a virgin, having not yet consummated her marriage. Frustrated, Egerman visits an old lover, actress Desiree Armfeldt (Boni Hester), for a little, ah, relief. Armfeldt is currently seeing Count Carl-Magnus Malcolm (Jerreme Rodriguez, filling in for Brian Coughlin), and the dragoon not only catches Egerman at Armfeldt's but does so while Egerman is wearing Malcolm's robe, postcoital. A jealous man, Malcolm insists that his wife Charlotte (Lara Wright) inform Anne of her husband's infidelity. The plot thickens when everyone arrives at the estate of Armfeldt's mother (Mary Agen Cox) for the weekend. Oh, and let's not forget Fredrik's son Henrik (Connor Barr), who is studying for the priesthood but is madly in love with his new stepmother.

Keeping the complicated story on track is a chorus of lovely voices – Rodriguez, Natalie Cummings, Devin Medley, Richard Roberts, and Sarah Fleming Walker – supported by a live orchestra that includes Cliff Bond, Clara Brill, Diana Burgess, Kurt Kumme, and Greg Wilson. Designer Mike Toner keeps the setting minimal, with movable set-pieces that accommodate the choreography by Danny Herman and Rocker Verastique, though the large cast still looks a bit cramped onstage during the bigger numbers. In a cast full of strong voices, Hester and Huckaby stand out, especially during the familiar "Send in the Clowns," with Molly Karrasch also striking as Petra, Anne's lady, when she belts parts of "The Miller's Son."

For such a sexually charged romp, though, the chemistry between characters isn't always spot on. Karrasch's free-spirited nymph rings most authentic, and Hester provides a nuanced character trying to solidify her true love. Barr's frustration at his situation is believable, Cox has her cranky, cantankerous stoicism down pat, and Wright's nihilistic wit is sharp, but Rodriguez's Malcolm feels more buffoonish than menacing (although this may be the point). Otherwise, the cast doesn't seem to fully embrace the story, with all its passion and intrigue. It feels more like light summer fare, the story merely a vehicle to get to the musical numbers – admittedly wonderful under Lyn Koenning's musical direction.

Still, it's a delightful evening with great show tune standards. And though the message seems to be that unchecked infidelity and adultery will result in everyone's happiness in the end, it can certainly be thought of as a vicarious, cathartic, cautionary tale.

A version of this article appeared in print on June 24, 2016 with the headline: Summer Fare