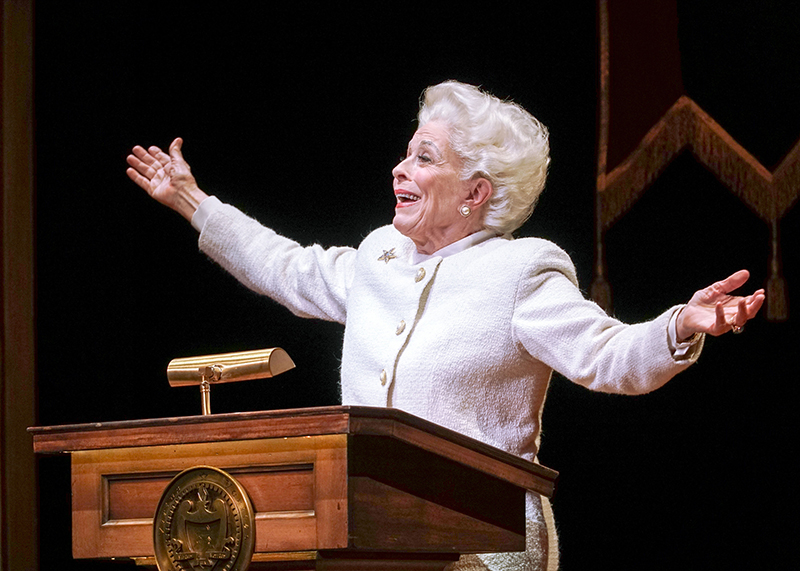 I was born on Fort Hood in the late Seventies. The son of a soldier, I spent the next 16 years hopping the globe, spending no more than a couple of years in any particular time zone – a nomadic tradition I'd gleefully continue for seven years after Dad retired. Central Texas was always "home base," though; a month or two was always spent at Grandma's while preparing for the next move, and nearly every summer was a vacation to the 190 corridor. I've now called Austin my home for 15 years, but I have two distinct sets of memories: Texas and not Texas.

"Golly, Shanon, thanks for the insight into your childhood ... you maybe wanna start talking about the play?"

Pipe down, you. I'm building to something here: I'm a Texan, through and through. More importantly, I'm an Ann Richards Texan, though I was only here for the tail end of her term as governor (and that time was spent more concerned with girls, skateboards, and how big my JNCO jeans were than with politics). Not many understand what that means outside of Austin, the Blue Island in the Red Sea of Texas, but as Holland Taylor took the stage in the title role of Ann, which she wrote as well as stars in, I swelled with pride and memory of what it means to be a citizen of the Lone Star State.

Taylor's performance as Richards is a master class, capturing every nuance of the governor: her drawl, cadence, courage, and stubborn power all on display. The work put into discovering every tiny mannerism is evident, down to a moment when Taylor gently removes her shoe to stretch her toes while on a call. It is this attention to detail that impresses the most, more channeling Richards than acting. The show begins at the commencement of an imaginary college in Texas, for which Richards is the speaker. Taylor nails Richards' brash charm as she talks about her childhood, marriage, and beginnings in politics. Even a dirty joke is thrown in, showing Richards could be just as comfortable chatting on a porch with a warm beer as handling matters of state. Once firmly planted in the world Taylor's script so deeply creates, scenic designer Michael Fagin's seamless automation transforms the set from an auditorium stage to Richards' office in the Capitol. We then get to see this legendary woman in action as she and the disembodied voice of her assistant Nancy (Julie White) spend an evening handling the various affairs of Texas politics and trying to wrangle all her children together to decide who's cooking what during an upcoming beach vacation ... peppered with an occasional innocently flirtatious call from President Clinton.

With director Benjamin Endsley Klein, Taylor brings us back to the Texas of the early Nineties. What is felt during the show is as important as what is said: As Richards talks about abortion rights, gun control, women's rights, and many other ideals for which we still struggle, memories of that era flood the senses. For me, it was a flannel-clad utopia – Manic Panic-colored hair, Doc Martens on riot grrrls, and the general badassery of the fact that this steel-forged dynamo of a woman was making her mark in American politics. The blowback from that era was George W. Bush, but this magnificent production entrenches us in a time of greatness, if only for the evening. The final image is a giant projection of the woman herself (provided, along with many other gorgeous projections, by projection designer Zachary G. Borovay), to which Taylor bows and blows an appreciative kiss.

Richards showed the world that there are two kinds of Texans, and hers was a Texan with which the world wasn't familiar. I felt like I spent an evening with a woman who made it okay to be the Texan I am, and Taylor's pitch-perfect portrayal left me hopeful that a leader like her will come around again.