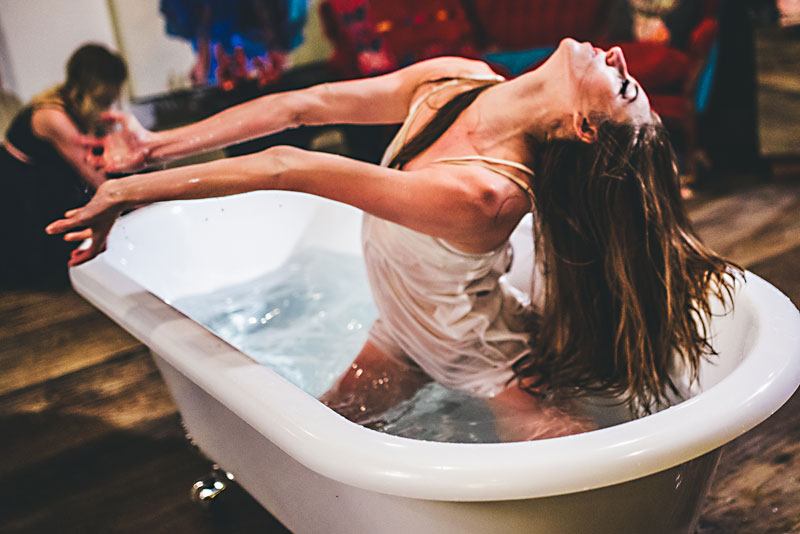 The room is grand, with little furniture, but it is not empty because it holds a piano, a piano with a body of wood and metal, felt and plastic, and with a history of being played. Via the piano, over the piano, under the piano, and within the music itself, people with bodies, complicated bodies of carbon and water, tension and release, and with histories and potentials collide. Composer-musician Catherine Davis, seated at the piano bench, leans into a resonating note, and dancer Oliver Greene-Cramer, leans into her, pressing against her shoulder.

"That's me. I'm not playing a character," says Davis, a musician and composer who, with dancer-choreographer Michelle Thomp­son, co-created Illusory Impressions, an installation of music and dance at the Texas Federation of Women's Clubs Mansion (often known simply as "the Mansion," at 24th and San Gabriel streets). The work consists of five vignettes of contemporary music and movement, each performed simultaneously in a different room of the mansion by various groupings of 16 dancers, three pianists, two cellists, and a vocalist. The order in which the audience encounters the vignettes is choose-your-own-adventure – to a point. While audiences can determine whether they want to visit the parlor before the tea room or save the balcony for last, the performers are free to vary the tone of the music, the choreography, or their relationships, which means that a thing you think you're returning to may not, in fact, be that thing anymore at all.

It's precisely this kind of subtle shift that Davis and Thompson want to bring attention to. Our judgments, they suggest, are not always based on the solid ground we think they are. The intimacy of the work, they hope, offers a setting for mindful awareness of how we are impressed upon.

"Oliver's character is some force within my life," says Davis of her duet with Greene-Cramer, which takes place in the parlor of the mansion. Thompson and Davis began their process nearly two years ago, with intimate conversations about the forces in their lives. "Shit was happening to me – good or bad," says Davis. "I was like, what do I do with it?" Thompson had used Davis' music for her choreography before, but while Davis was moved by the dancers, she yearned for an even deeper connection. For the duet, Thompson asked Davis, "Can [Oliver] put his hand on your hand? Can he cover your eyes? Can he be down by the pedals?" Davis was game. "Yes." "Yes." "Yes."

In that duet, Thompson says, "The piano is really what ties them together. The piano is their home." Audience members become intruders into that private space, becoming witness to unspoken parts of a relationship and aware of their own presence and reactions. What do you do with it? How do you filter or reflect it and project it back out?

Thompson admits she gets teary watching the duet. And while Davis acknowledges that "only 50 percent of people get chills from listening to music," she's always going for that gold. "Until I'm getting that visceral response, I scrap it." Being a trained composer, she could call on theory to try to evoke such a response, but she's also been in rock bands (most notably, Zykos), and she prefers the goose bumps method. Thompson and Davis agree that the cello and piano foster particularly deep connections with body and soul, viscera and nostalgia. (Early in the process, they edited out a viola, which, they felt, didn't serve this purpose.) For Thompson, who spent 14 years dancing with Ballet Austin before moving on to New York City last year, those instruments are key when she's exploring new movement as a choreographer. "Piano and strings put me in that place and open me up."

Both collaborators are eager to evoke similar vulnerability in the audience. During a preview performance last year, Thompson was fascinated by the effects of a particularly eerie duet, performed by dancer Elise Pekar­ek, who wore a negligee and moved in and out of a clawfoot bathtub, and vocalist Karla Mazur, who augmented her unnerving notes with live electronic looping. The audience's anxiety influenced the performers, who distilled that anxiety and projected it back out – an emotive loop. As much as Thompson and Davis are interested in what we do with what we are given, they seem also interested in how we are played. Those are the two forces, it seems, behind the only constant of humanity. As Thompson says, "You're never really one thing your whole life." Jennifer Sherburn's Riverside
With her new site-specific dance, the Austin choreographer says, "Come on in, the water's fine!"