The Blanton Museum of Art’s retrospective may tap nostalgia for a certain generation, but it can be deeply moving, too 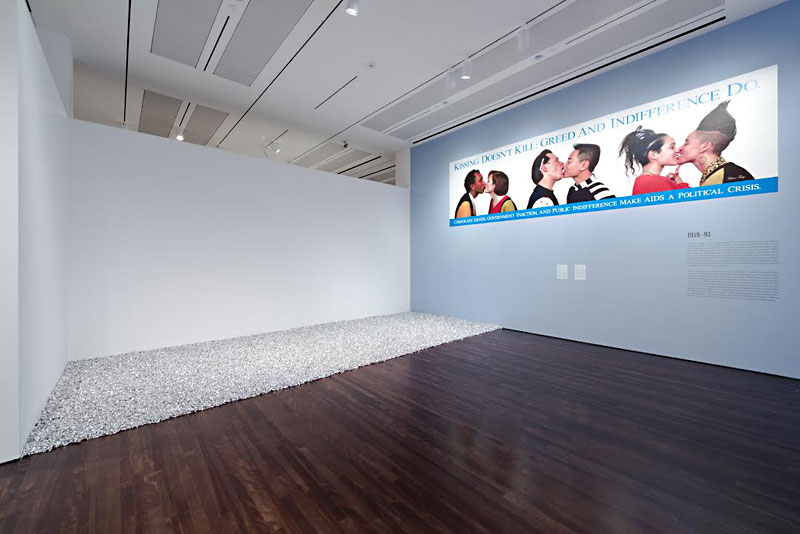 Félix González-Torres, "Untitled" (Placebo), installation view for "Come as You Are: Art of the 1990s," Blanton Museum of Art (Courtesy of Michael Anthony García)

When Kurt Cobain killed himself, I had no idea why I was supposed to care. Nirvana wasn't on my radar, so when kids showed up at school wearing blue because, I don't know, it was the color of his eyes, I didn't understand. Eventually, I would find real appreciation for the music, but that was a cultural moment I simply missed. So while I get why the Blanton Museum of Art named its new exhibition "Come as You Are: Art of the 1990s" after a Nirvana song, it doesn't really represent my Nineties. I'm okay with that because, as the exhibition demonstrates, there are many Nineties. There's the identity-politics Nineties, the AIDS-awareness Nineties, the digital Nineties, and more. This higgledy-piggledy speaks to a reality, which is that we can name an era after a decade, but attempts to strictly categorize history are arbitrary. (Example: "Come as You Are" represents work from 1989-2001, and even steps outside of these parameters here and there.) Alex Bag's installation, Untitled Fall '95, is a hilarious reminder of this. A screen is set up against a multicolored wall faced with two beanbag chairs, presumably to give a hallucinogenic living-room feel, though it reminded me of a Chuck E. Cheese. In the video, Bag rambles about her late-20s life in a way that should be dull ("Blah blah I worked at a hair salon"), but combined with eye rolls and turns of phrase, the video is funny, a novelty in most museums where typically people's faces are perpetually tightened in grim contemplation. We're told the piece is referencing the then-new MTV series The Real World. In terms of reflecting the mishmash of that era, The Real World makes rich source material, as it tried to portray "reality" by forcing stereotyped individuals to live together, then filming it. It made for great TV. Remember when the militant black guy and the naive white girl argued about racism? Classic.

Please don't mind my blathering nostalgic. I just saw an art show that romanticizes a period I am old enough to remember. That said, I don't look at art to feel nostalgic. If the work isn't immediate, it's nothing.

On walking into the exhibition, I was met with a piece I had never seen in person by an artist I have always returned to, Félix Gonzál­ez-Torres. González-Torres died in 1996, only five years after "Untitled" (Placebo) was completed. "Untitled" (Placebo) may be the most powerful piece in the show, though it would be the most powerful piece in almost any show. Over 1,000 pounds of candies wrapped in silver cellophane are spread atop a section of floor, making a shining, textured carpet. Viewers are invited to take one. As the candy melted on my tongue, I considered the rock music echoing through the galleries from a nearby video piece. "I'm being immersed," I thought. This was so, but after all, what is art for?

I also considered González-Torres. Earlier in 1991, his partner, Ross Laycock, died from AIDS-related complications, as the artist himself later would. The shrinking weight of the candies as people take them mimics Laycock's shrinking body mass as he neared death. As I sucked on my candy, I thought of the artist and his loss. "I'm eating Laycock's body," I thought. I was moved. But what is art for?

Blanton Museum of Art, 200 E. MLK
www.blantonmuseum.org
Through May 15