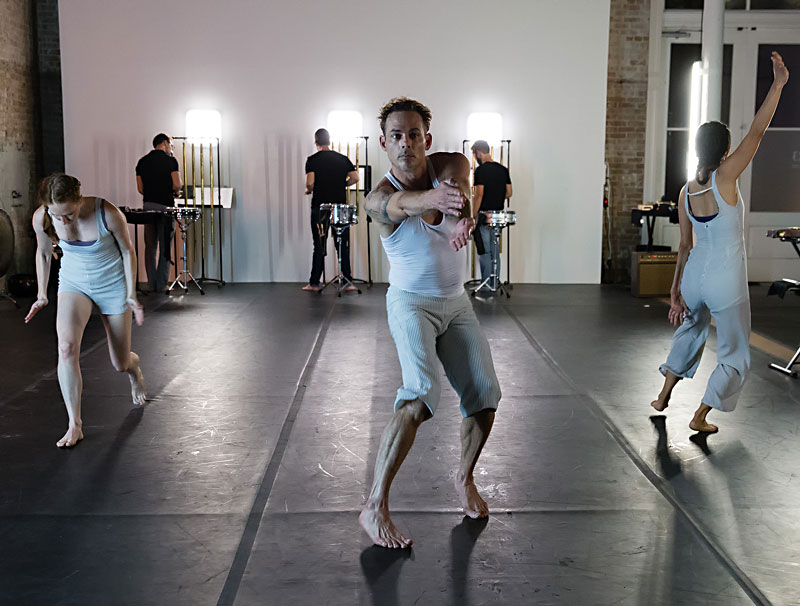 The seeds for Lumen were planted when choreographer Andrea Ariel was invited to propose a site-specific work for the Dan Flavin fluorescent light installation at the Menil Collection in Houston. When the Menil project was postponed, Ariel kept going. She commissioned original music from line upon line percussion – the group's first composition together – and, with three dancers, crafted movement recalling that gallery setting: sculptural, three-dimensional, tolerant of daylight. She secured the historic McKean-Eilers building, which is currently vacant, and designated a rectangle for the performance space, with seating along two sides. In a distillation of the Flavin installation, lighting designer Stephen Pruitt fitted the space with a smattering of fluorescent tubes that slashed light across the walls and in the cavernous space between our heads and the ceiling.

The three members of line upon line – Matt Teodori, Adam Bedell, and Cullen Faulk – performed around and among the dancers, making use of drums and bells as well as sand, which poured from paper cones into buckets, and bamboo wind chimes and weather vanes set in motion by electric fans. Dancers Alyson Dolan, Lisa del Rosario, and Nathan Brumbaugh didn't meet with them until the performance week, and the show had a spontaneous, fresh vibe on opening night. Although the work wasn't improvised, it was invigorated and invigorating, having an aura of equal parts midcentury jazz club and digital-age maker studio. (The dancers' stretchy jumpsuits, designed by Tanya McCown, were the main nod to the Nineties, the era of the Flavin installation.) And yet the working parts were strikingly precise: The sand stopped rushing, the fans ceased blowing, and all six reached their mapped points in space at what seemed like the perfect time.

In the immediate, the work evoked pure wonder, but in rearview, the two trios, along with an architectural aesthetic energized by three structural columns across the performance space and the exploring of vertices and the space within shapes, the work appeared as a study of three. Embraceable and objectifiable, three, the work reminded us, is less a number than a shape (we can subitize three without counting). Carrying three glasses to the table uses all of our dexterity and caution; two is too easy, obvious, pedestrian; and four destroys structural integrity. At times, the dancers were each a point of a triangle morphing from acute to obtuse but retaining the integrity of its essential shape. At others, they were tripods, in elbow-braced headstands and controlled forward rolls. In sound, three was rendered as close and focused when the musicians bowed their heads close over a table, rattling small objects in metal cans, and then as a landscape, with far-flung sounds initiating from points across and beyond the performance floor.

Three was human, too, if theoretical: The trios generally appeared sans hierarchies. Could they have been triplets, or that family you choose? Perhaps three was really one, an individual epic, manipulating and stretching its shape and listening to the ricochets within. – Jonelle Seitz

McKean-Eilers Building, 323 Congress
April 21
A version of this article appeared in print on April 29, 2016 with the headline: Andrea Ariel Dance Theatre’s Lumen Soundpainting Bowie
In The Bowie Project 2, everyone is Bowie, and nothing stays the same