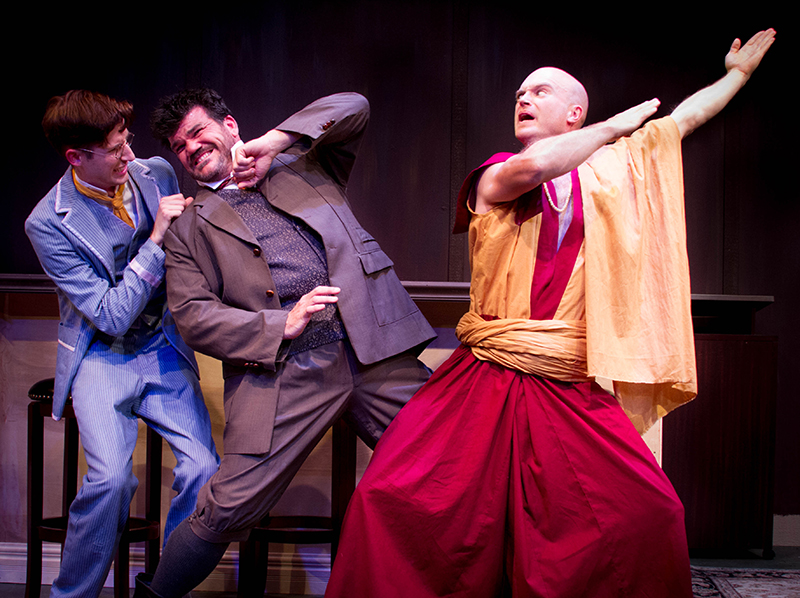 
Trope, stereotype, cliche: typically terms with negative connotations, avoided by playwrights and producers as unforgivable sins. Rules beg to be broken, however, and when embraced as a tool of reflection, they hold a mirror up to the very absurdities that such ideas manifest. It's tricky business, though – there are lines that, when crossed, bring discomfort to our social contract. Nell Benjamin's The Explorers Club, now at Austin Playhouse, is a vivid comedy that, ah, explores where those lines are drawn.

With nearly flawless execution, Artistic Director Lara Toner Haddock brings us an evening of silly fun that smuggles in notes of feminism and a strong indictment of unchecked white masculinity. The humor is rude and brash in set designer Mike Toner's heretofore "men only" lodge, a den of somewhat dashing adventurers in turn-of-the-20th-century London. A top-drawer cast gleefully eviscerates the late Victorian era, full of colorful characters mostly oblivious to their own rampant chauvinism, sexism, ... hell, pick an "-ism," they've got it. Claire Grasso's Phyllida Spotte-Hume, a spot-on scientist and explorer, is the first woman considered for membership in the club, much to the consternation of some of its members – notably Brian Coughlin's Harry Percy, full of wonderfully overblown machismo. David Stahl and Michael Stuart give wonderful performances as professors Cope and Walling, with the aid of some hilarious props by Kathleen Toner. A charming puppy love for Phyllida exudes from Aaron Johnson's Lucius Fretway, but the spotlight is often stolen by a more controversial character, Luigi, played with care and comedy by J. Ben Wolfe.

Luigi is Phyllida's foreign discovery, a blue-painted tribesman sporting a red mohawk, one bone through the nose shy of utter offensiveness, and he's just the start of where the play's potentially problematic reachings tread dangerously close to the line. I say "potentially problematic" because, well ... of course, the sight of this blatant "savage other" onstage is going to raise a few forward-thinking eyebrows. Wolfe treats the character with respect, though (for Wolfe's thoughts on the character, see austinchronicle.com/daily/arts) and it's through his performance that we begin to question just what the play is saying, if not how it's being said. Zac Thomas furthers the introspection as Beebe, an explorer thought dead by his companions, who has returned from captivity among monks of an undisclosed martial art. Where Luigi represents "othering," Beebe goes full Orientalism in a strange hat and robes (among the many perfect costumes by Buffy Manners), leading an unseen army with guttural grunts, leaping about the stage in a nearly acrobatic fighting fashion. Add Tom Parker's wonderfully smarmy Professor Sloane, who shamelessly decries women as the weaker sex, theorizes that the Irish are the lost Jews, and actually says the word "Hottentot" at one point, and it becomes clear that Benjamin's script is pushing all the boundaries it can.

To what end, exactly? For me, the play was very funny, incredibly well performed, and an over-the-top mockery of the times – perhaps even a parable for today's world of business, theatre, society, etc. A cautionary tale, perhaps, saying, "For the love of God, don't be these guys, don't live in this world." Benjamin mentioned in a 2013 New York Times interview that she'd experienced exclusion and sexism similar to Phyllida's early in her career, and one can see how she's sending up that sentiment, and including all things begotten by run-of-the-mill white maleness for good measure. But I looked deep and hard to get there, and I can respect those falling on the other side of the argument, even if they had to look hard to get there, too. Even the best intentioned white people have a habit of strolling innocently into racism by trying to fight it, and when you offend someone, it's not really up to you to decide that you didn't. Wherever you fall in this debate, kudos to Austin Playhouse and their tight, crisp, and lively production for having resurfaced the debate in the first place.

A version of this article appeared in print on April 22, 2016 with the headline: Terra Incommodious