Let's Look for the Purple Banana With Princess

Judging by their tribute band, Maya Rudolph and Gretchen Lieberum would die 4 U, Prince 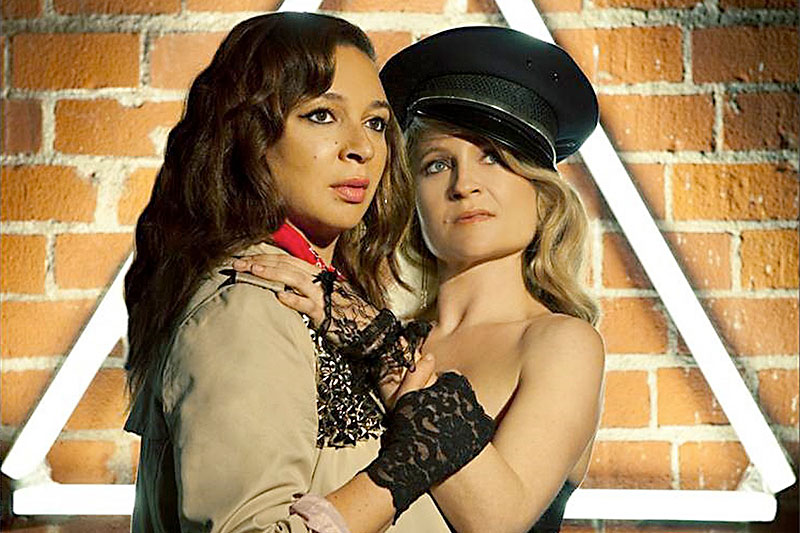 Despite the setting – a comedy festival – and the star – Saturday Night Live alumna Maya Rudolph – there's nothing intentionally funny about Princess, the band that the comedy actress and her longtime friend and college roommate Gretchen Lieberum, a funk and jazz musician in California, perform in, as homage to Prince, one of the finest and most freaky performance artists of our time. Since debuting on Late Night With Jimmy Fallon in September 2012 with a scratch take on the Purple Rain staple "Darling Nikki," the duo has operated in awe of the Purple One and attempted at every turn to live up to his legend.

"This ain't no mockery," says Rudolph. "I think because of my history, people assume that it's a send-up or that we're taking the piss out of something. But we're not. The message is to celebrate something and pull it off as perfectly as possible."

The Chronicle spoke with Rudolph and Lieberum last Wednesday, 10 days before their show at the Moontower Comedy & Oddity Festival. Rudolph took a little longer than Lieberum to get connected to the call.

Austin Chronicle: Your publicist thanked me for getting up early for this interview. But we're in Texas, where it's actually noon. So I'll extend that thanks to you.

Gretchen Lieberum: Maya and I both have children, so we've been up for ages. Don't worry about it.

AC: How old are your kids?

AC: What are their opinions of Prince?

Lieberum: My daughter first heard him and was like, "Is that a lady? Why is he wearing eyeliner?" I've got all of his albums on vinyl. They're really disturbed by the Dirty Mind cover, where he's in his underpants and jacket.

AC: I was remembering the Lovesexy cover this morning.

Lieberum: Kids these days have seen a lot.

AC: Princess strikes me as a tribute held in earnest to the original artist.

Lieberum: The thing I think people will respond to about what we do is that we really just love his music. There's no irony about it. It's funny, because it's two 40-year-old women singing really dirty Prince songs. But we truly love his music, and it's a celebration of that music. It's like the music you loved when you were 10 and you were singing into your hairbrush. It's that love, it's just we're 40.

AC: Austin has a band called Foot Patrol that has covered Purple Rain and 1999.

Lieberum: I love the idea of covering albums. We've done Purple Rain top to bottom a couple of times, and we're talking about doing 1999, Controversy, or Dirty Mind.

AC: What does a standard show involve?

Lieberum: We'll mix in and do random bootlegs and B-sides, weirdo versions. We definitely throw in some deep stuff that the average person wouldn't know. We pride ourselves on it not just being a parade of greatest hits. We've got to put a few heavy hitters in there, and we love those songs, but there's a lot of other stuff in there as well.

AC: That's the result of you being Prince fanatics before you decided to cover Prince songs, I would bet.

Lieberum: We've been friends for 22 years and have been nerding out on this kind of stuff for 22 years. We were in a band together in college, where we played original songs. But we were constantly playing weird Prince demos on cassettes. We're pretty big superfans and tend to impress the Prince nerds – and the Prince nerds are pretty emotional. There's a Prince forum. We're on the good side of the Prince forum, thank God.

AC: We were just talking about how you've fallen into favor with the Prince forums.

Rudolph: Are you aware of the Prince forums?

AC: I don't peruse the forums, but I am sure that they exist. The one fanboy question I had for you concerns whether you've covered "Strange Relationship"?

Lieberum: We've been focusing on Purple Rain and earlier [albums] than Purple Rain, though we did do "If I Was Your Girlfriend," which is from that album.

Rudolph: We've always wanted to do "Tamborine," but it's going to take certain muscle to pull that off. There was talk of Parade, which I'd be thrilled to do. But it's very different and would require more musicians.

Lieberum: Prince's earlier stuff has almost a punk feel to it. It's more scrappy, along with the funk. I think our band does that well. The later albums venture out of that a little bit.

AC: You're busy people. How much time do you have to devote to this project?

Rudolph: We weirdly know a lot of the songs innately. When Gretchen and I get together with the band, it's like we're conducting how we want [songs] to go based on our memory of it by ear. We sing the backwards portion of "Darling Nikki," and we've never practiced it. We've spent our lives with each other practicing these songs. We've been singing them in each other's dorm rooms and shitty apartments and cars. It's been a project in the making.

Lieberum: And our band gets frustrated. If they get one note wrong, we know it. We know every "Owwww" in every song.

Rudolph: Which is interesting, because we want the music to be exactly what it sounds. But the element that makes Princess different from Prince besides the fact that we ain't Prince is that we're harmonizing. A lot of those harmonies aren't on the record. It's the only slight difference. It's just weirdly so satisfying to my body when I hear music exactly the way –

AC: When you first began to play his music, was there anything that you learned that you didn't previously recognize?

Rudolph: Oh, like you mean how we were singing our own words for 20 years?

Lieberum: I'm pretty notorious for having screwed up lyrics.

Rudolph: Everybody you know has lyrics that they've screwed up since they were a kid. What's yours again?

Lieberum: "Are we gonna let the elevator break us down?" It's really "bring us down." Womp, womp. No, I think we realized how much he wrote, how prolific he is. It's insane. On some of those early records, he did everything. And he was 19. It's pretty astounding.

AC: Is there a part of the music that you enjoy more than the rest?

Lieberum: I just like harmonizing with Maya. I do enjoy the backwards part of "Darling Nikki" and belting out the end of "Beautiful Ones." That fulfills some childhood fantasies for me. "Purple Rain," that song is emotional. It's really sweet. It feels great to play, and people will always sing the first chorus.

Rudolph: It's nice to hear a roomful of people together. I don't feel any pride – let's be honest, I didn't write that song. But collectively, I feel a part of the room in a very bonded way. We're all feeling it together. That's really the satisfaction. If I wasn't singing for the fans, I'd be singing them in my car or in the shower.

Lieberum: Someone needs to create a piano for the bath for Prince, because he loves baths.

Rudolph: He does love baths.

Lieberum: I think he'd do a whole show in a Victorian tub if he could. We're not quite there yet.

A version of this article appeared in print on April 22, 2016 with the headline: Look for the Purple Banana