Among Moontower comics, this self-professed history buff is the Ren fairest of them all 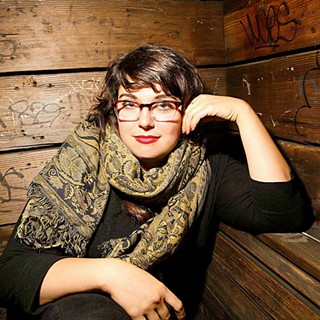 Jenny Zigrino was "a weird girl" growing up. "I was never into what girls my age were into," she says. "I enjoyed just staying at home watching historical documentaries and sewing costumes. I didn't really care about boys or whatever normal high school people did. For my prom, I wore a colonial gown that I sewed." In an alternate universe, she might have become a costume designer or archivist, but she found an early love of comedy along with her love of history and textiles. Now, as an actor and comic, she's performed on Late Night With Conan O'Brien, appeared on @midnight and Adam DeVine's House Party on Comedy Central, and just finished filming her second feature film, Bad Santa 2. But most importantly – for us, anyway – she'll be performing in Austin for the first time in five years this week when she makes her Moontower Comedy & Oddity Fest debut. In advance of her performance, she talked with the Chronicle about her current projects and her love of Renaissance faires.

Austin Chronicle: You've done a lot of varied work − TV, writing, acting, stand-up. Is there a medium that feels more at home than the others?

Jenny Zigrino: For me, stand-up is always going to be the most comfortable thing. I really enjoy being in front of the camera, but mostly I enjoy it if it's my own thing that I've written or my own character. But I feel like you should be well-rounded and do everything. I've tried to do as much stuff as possible.

AC: Has it been difficult working on stand-up and touring while filming?

JZ: Yeah, it's hard when your job is to write about things that happen to you, and you can't legally talk about what's happening to you. I feel like with movies and TV and pilot season, it does get hard to write and find the time to really be able to, not only write, but go out to open mics and try out what you've written. It's like I'm desperately writing, and I have to find a sweet spot in the middle of a headlining set in North Dakota to try out new material. But at the same time, I can't make that my entire set. I still have to go and do my A stuff. So I'm not allowed to be as free as I want, like at an open mic where people expect that you're going to bomb. That's been the hardest thing. But it's an awesome problem to have – that you're so busy that you can't do other things.

AC: In your stand-up, you joke about the Ren fest. Were you a "Rennie" in the past? Are you still?

JZ: Go to the Ren fest? I go every year. They're fun as hell! Now I go more just to watch. But when I was 16, I liked being in it. Like, I wouldn't dress up now. [Pause] Well, maybe I would, if I was part of the royal court and getting paid. Then I'd put on whatever you want me to put on. I don't care!

AC: Did you have a character when you were younger?

JZ: I did. At the Renaissance faire, I was an artist. But I had to make up for the fact that my clothing was more peasantry clothing since at that time artists were actually wealthy. So I said I was a runaway merchant's daughter artist, and I would draw people. I would draw really ugly, horrible pictures of people, and they laughed and enjoyed it. But I still had to be historically accurate with everything that I did. I also, at my dad's house in Minnesota, still have every piece of costuming. I can't throw them away. I can't let go.

AC: You don't have as many jokes about comic books or video games or that kind of thing as many "geek comedians," but I sense a lovable nerdy vibe to your sets. Were you a bit of a nerd growing up?

JZ: I wasn't really into video games, but I would get obsessed with things. I was obsessed with the Beatles. Then I was obsessed with some other horrible bands. Then I got obsessed with Al Pacino. By age 16, I was, like, obsessed. But these obsessions would like lead me down a path of worrying about, like: "Okay, I'm in love with Al Pacino, and I'm in love with The Godfather. I'm going to go out and buy as many 1940s dresses as I can and dress like I'm in that era. And I'm going to do this, and I'm going to do that." So I became nerdy about other things. Like, I nerd out about vintage clothing really bad. I can tell when an item was made just by the tag, if it has a tag. And what kind of hem it's using. So I have other nerdy things about me if we're talking about "nerd" in the sense of feeling passionate about something that is not of the mainstream. Vintage clothing I get really nerdy about. The 18th century – like, I love the Age of Enlightenment. I love Mozart. I was obsessed with Mozart. There are just these weird things that I loved that maybe your average 17-year-old didn't – like, how to quote Amadeus by heart.

AC: Do you have any plans for a solo comedy album?

JZ: I have an album recorded. I'm waiting to see if I got Comedy Central's The Half Hour before I release it. It will be on vinyl for all the cool people to buy, and it's called Moon Pleasures.

A version of this article appeared in print on April 22, 2016 with the headline: History Channeler