On his "Making America Great Again!!" tour, the comedian aims to crack up fans from sea to shining sea 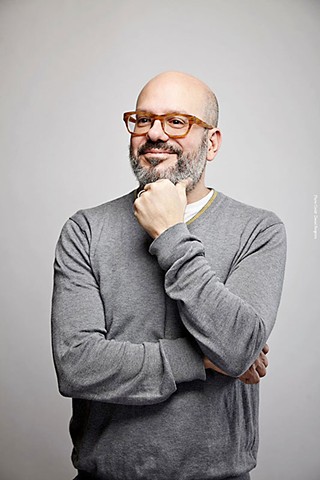 More than 70 appearances in 35 states and the District of Columbia in four months. That's a schedule to make a candidate for president break out in a cold sweat. With that many stops from coast to coast and a tour titled "Making America Great Again!!," is David Cross making an 11th-hour bid for the Oval Office, presenting himself as a shiny-domed alternative to the carrot-colored thatch roof of Donald Trump? Alas, no, says the actor and comedian. But as he was planning his first stand-up tour in six years – he's been kept off the road by a few little side projects such as the return of Arrested Development on Netflix, his reunion with Mr. Show partner Bob Odenkirk on the Netflix sketch series With Bob and David, and his own series, The Increasingly Poor Decisions of Todd Margaret on IFC – Cross says he figured, "If I'm gonna do this, let's do this." He wanted to reach as many fans as he could, especially those in regions where his tours might not typically go. In a phone chat with the Chronicle, he explained what this tour means to him.

Austin Chronicle: It's a cliche to say, "Thank you for taking time out of your busy schedule to talk to me" –

David Cross: It truly is.

AC: – but man, you have a busy schedule. I'm staggered by how many tour dates you have. And all over the country. What was your thinking in putting this tour together?

DC: I've always had a small frustration when I was out on tour. When I did the stand-up tour, I think I did 29 cities, something like that, and when Bob and I would go out, it was only like, 16 – mostly the East Coast, a couple of places in the Midwest and South. Maybe it's because [where] I grew up wasn't really in a city or a place where a lot of people would come to, but I felt like we were really missing the boat on not doing a more extensive tour and going to some of the smaller towns. And on the last tour I did, I'd be in Chicago and some guys would be like, "Oh, man, we drove six hours from, uh, you know, Montana." Well, maybe not Chicago, but Minneapolis [laughs]. I don't have a map in front of me, but wherever six hours from Minneapolis would be. 'Cause that was the closest we were getting to people. And it happened all the time, and you'd feel bad. So once I knew I was going to go out on tour, I figured if I'm gonna do this, let's do this. Initially it was, I'm gonna say, 48 stops, and I was going to end in Oklahoma City at the end of April. But I kept adding to it. After Oklahoma, I'm back in the Upper Midwest – so South Dakota, North Dakota, Idaho, Iowa, ... places I've just driven through, really. It just became, in for a penny, in for a pound, I suppose. 'Cause I'm not going out again for years. It may be three years before I go out again. And I just love to do it. And it should be fun. It should be interesting. It really is fascinating to see America this way. I haven't driven cross-country in quite a while.

You know, it is exhausting. It's both mentally and physically exhausting, and it can get depressing when you're checking in to your 58th DoubleTree, you know, same layout, same furniture, same bed, same shitty windows that don't open. And you don't eat well, for sure. But it's good. It's work. It's work I like, and I like working.

AC: You've been out for a few months now and been to a number of places, so what's your take on the comedic state of the union? Say you're the Comic Laureate and you get to make pronouncements about what you've learned from all these different places. How are things out in the heartland?

DC: Well, I see kind of a bleakness – but not a bleakness in a sense of the weight of the world on the common man's shoulders or anything like that. I see a bleakness in the sense that I remember towns, small towns, being way more individualistic, having more flavor and uniqueness. In 2016, I see much, much, much more homogeneity. There's a sameness to everything. There's a strip mall with a Moe's Southwestern Grill and a Chipotle and a PetSmart and a Target. And the food options – there's less diners and more P.F. Chang's and Applebee's and Red Robin's, and the sameness of it and the loss of the individual character of these towns and cities is a bit depressing.

AC: Do you feel like you get to address any of that onstage?

AC: Is that evolution of the act as you tour something that you enjoy?

DC: Oh, yeah. That's not something I consciously try to do, that's something I end up doing just 'cause I'm getting bored with saying the same stuff over and over again. I do most of my writing onstage anyway, so I'll tape the set, and then I'll say, "Hey man, can I get that late show from Chicago? I riffed some stuff about gun control, and I want to make sure I say that." Then I add in the stuff that I riffed that works.

AC: Has there been a show or moment on this tour so far when you felt like, "I'm so glad I'm doing this. This is the reason that I wanted to do this tour in the first place"?

DC: Oh, yeah! Several times a night, for the most part. I've definitely had a few clunkers, and sometimes it's my fault and sometimes it's the audience's fault, and sometimes it's actually the physical space's fault that it's not a great show. And even then I will either meet somebody physically or see something on Facebook or Instagram or Twitter, and it's somebody who was at the show and doesn't know that I'm thinking, "Well, that show sucked," and [that person's] going, "I'm so glad you came here, and I appreciate hearing your voice." It reminds me very vividly of being 15, 16 years old, the first stand-up I ever saw was in Atlanta, it was Steve Martin, I was living in Roswell, Georgia, and it was huge. I just hated my life. I was in a kind of rural suburban area, very white, very Baptist. I was a stranger, an oddity, and to know that there was this guy doing these goofy, stupid jokes that if I told in school, I would get beat up, it was a huge thing for me. And I try to remember – I do remember – that even when I'm bummed out or I look at the crowd and go, "This is gonna suck. I can tell you that this show is not gonna be good" – I'm at a college in some small town in Pennsylvania, and I can just look at the audience and know this is gonna be work, it's not gonna be fun for me – I know there's that kid out there. I know that in every show there's somebody like I was when I was young. I always have that in the back of my head. Those moments make it worthwhile. And then the moments when you're onstage and people are just so happy. "Thank you for coming here. Thank you so much." It's my pleasure.

A version of this article appeared in print on April 22, 2016 with the headline: Cross Country