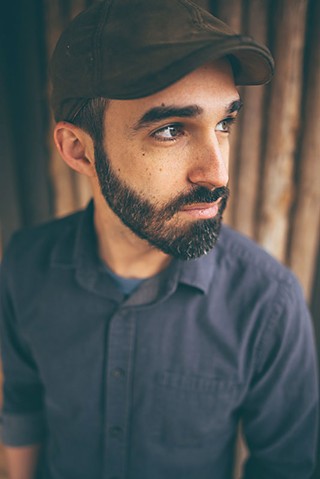 Bryan Gutmann has been a staple of the Austin comedy scene for over a decade. He recorded his first solo comedy album, That's How Scientists Talk, with the Austin-based comedy collective and record label Sure Thing last September, and (to the best of his recollection) he has "performed in some capacity at most of the Moontower festivals so far." This year will be no exception. He'll bring his special brand of irreverent, observational humor to the Moontower Comedy & Oddity Fest's Austin Towers show at the Velv Comedy Lounge – a venue that no doubt feels like home. In anticipation of his upcoming performance, Gutmann made time for an email interview, catching us up on his latest album and the growth of the Austin comedy scene.

Austin Chronicle: How did you get started in comedy, and who were some of your main influences?

Bryan Gutmann: Stand-up has always been something that I enjoyed watching. I can remember being a kid and loving that old VH1 show, Stand-Up Spotlight. I was also a kid who loved to draw or write little short stories, so eventually when I was older, all of those interests finally clicked. When I was first entertaining the idea of giving stand-up a try, Cap City [Comedy Club] had their open mics on Wednesday nights after the main show. I went just to watch for weeks until finally a friend of mine pulled the classic "I'll do it if you do it" move, and so I went for it. At that time, I'd say that my main influences were Jim Gaffigan, Todd Barry, Nick Swardson, Mitch Hedberg, and Dave Attell. And of course Seinfeld. He was the first and biggest influence. That list has definitely changed over the years, but those were the original inspirations for sure.

AC: You recorded your first solo album with Sure Thing last year. How did you start working with them?

BG: Duncan [Carson] and Brendan [K. O'Grady] have always done great things with Sure Thing. They've always put so much work into the live shows and are just genuinely great guys. So when they told me about the label they were starting, I was immediately on board. I had been playing with the idea of recording something in the past, but everything fell into place so perfectly with Sure Thing. It really was a no-brainer.

AC: Was the experience of recording your own solo album different from other recordings you've done?

BG: It was just different in the sense that I really wanted this recording to stick. I had made my own sad attempts at recording longer sets with the idea of maybe piecing it all together for an album. But the recording with Sure Thing was something that I didn't want to feel like [I] needed to do over. So I was definitely nervous grabbing the mic with that in mind. Other than that, those guys really know what they're doing, and we structured the show to just be as much like any other comedy show you'd see.

AC: Although your album is stand-up, you recorded it at Austin Sketch Fest. Do you predominately focus on stand-up, or have you considered sketch comedy or acting as well?

BG: I've basically always focused on stand-up. I've written and acted in recorded sketches over the years, but the main thing has been stand-up for me. There's a good chance that I'm the world's worst actor. Having said that, I really love writing, and I'd like to get back into writing sketches the way I and the comics I came up with used to.

AC: In what ways have you seen the comedy scene in Austin change since you started? How does it compare with some of the bigger scenes, like L.A. or New York?

BG: It is very weird to me that I've been in this scene long enough that I can actually talk about "what it was like when I started." The fact that there are multiple comedy shows that you can check out each night of the week is something that wasn't really around 10-ish years ago. There was Cap City, the Velveeta Room, and then just a little show that would happen here and there. But nothing that happened on a consistent basis. As a comic, the fact that you can get onstage every night of the week is awesome. I think a big turning point in this town was when Matt Bearden took over Tuesday nights at Cap City with PUNCH! That really seemed to light a fire under the whole scene, and now we have great weekly shows like Buzzkill, Sad Trombone, and, of course, Sure Thing. And that's just a little slice of the pie.

Talent-wise, Austin absolutely holds its own when compared to Los Angeles and New York. You can see it when comics from out of town do guest spots here. They are absolutely hilarious, but it's not like they get onstage and everyone goes, "Okay now it's time for some real comedy." The one thing that is undeniable about Los Angeles and New York is that they are still splitting up the entertainment industry jobs. Austin is such a wonderful place to perform, but it's still not an industry town. It's been really nice to see some progress in that department with things like ATX Uncensored(ish), but overall, Austin is still just the place that likes to throw the party.

AC: Any performance, recording, or tour plans past Moontower?

BG: With the recording [of That's How Scientists Talk] done, my main comedy goal is to rebuild my set with all-new material so that I can do things like perform out of town again and record a follow-up album. Right now, I'm focusing on trying to do as many sets around town as I can to get this new stuff worked out. So keep your eyes peeled for me sweating out these new dumb ideas!

A version of this article appeared in print on April 22, 2016 with the headline: Stand-Up Guy