This production at St. Edward's University knows just how to bring forth this modest musical's many charms 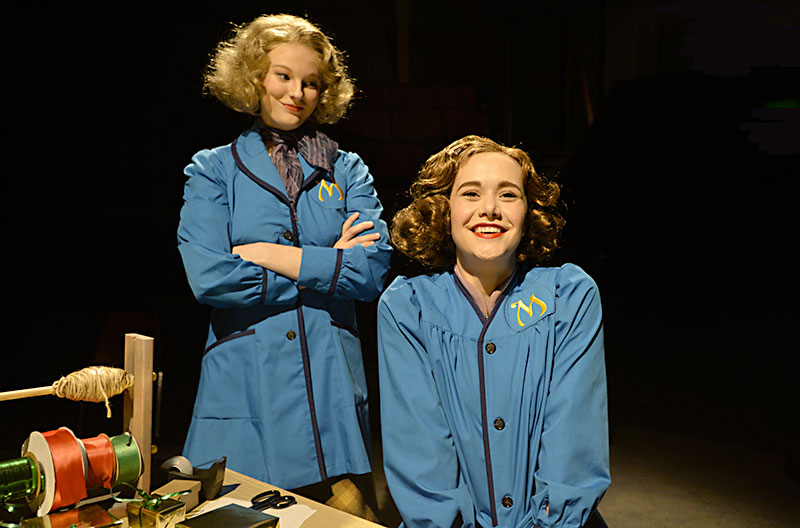 A modest little box figures prominently in this tale, one covered in the plainest brown leather, utterly unadorned, so lacking in anything fancy or posh that you might not give it a second glance, much less pick it up. But if you did ... ah, if you did and were to lift its lid, then a charming melody would play – a simple tune that's sweet and cheering, and made all the more so by the delicacy of its sound, its clockwork chiming. You've taken a chance on this unassuming item, and unexpectedly it's beguiled you.

So it is with She Loves Me, a lesser-known musical that, against such Broadway standards as Oklahoma!, West Side Story, or even the blockbuster that Bock and Harnick wrote just after this show, Fiddler on the Roof, may not look like much: seven characters working in a Budapest parfumerie, selling soaps and creams and worrying about keeping their humble jobs. Sounds rather ... brown, yes? Ah, but step through the door of that shop; meet its gruff but hearty owner, Mr. Maraczek, and those clerks, so congenial and full of character; and watch as two of them, so at odds when they meet, fall slowly, sweetly, inexorably in love, and the most enticing music begins to play. It's Bock's score, sure – so sunny and funny – but that enticing music is really the whole of this piece, which gives us all the romance and humor and ache that we desire from musicals, but in the elegant miniature of a music box.

That director Nick Mayo understands this about She Loves Me is clear as soon as the relentlessly chipper delivery boy Arpad (Hollis McNutt, relentlessly chipper) pedals his beloved bike onto the Mary Moody Northen Theatre stage and the clerks arrive at Maraczek's, admiring the glory of the morning and dreaming about taking the day off to enjoy it. It's a moment of workplace camaraderie, the kind that blooms when the day-to-day duties fall away and those who share them don't have to be employees, they can just be people. It's a moment so common, so ordinary, but so true, and Mayo crafts it with such sensitivity that right away we're as at ease with this shop's staffers as they are with one another. We recognize them as the kind of folks who work alongside us at our jobs, folks who frequently become a second family. And with each scene and song, we see the ties that bind these worker bees grow tighter, more intimate, and we're drawn nearer to them.

That intimacy at the heart of this small musical is one reason it's so beloved by those who have discovered it. Without the spectacle and showiness of a traditional Broadway musical, it's just the characters dominating the spotlight, and we can grow so close to them. That's easy to do here, thanks to Mayo's guiding hand and the vivacity of this cast. Who wouldn't want to patronize Maraczek's when you'll be cared for by the likes of Maureen Fenninger's Ilona (flirty and feisty, with drop-the-mic comic timing), Jarrett King's Sipos (his sad-sack subservience given a refreshing affability here), and even Ev Lunning Jr.'s Maraczek (whose black clouds of ire finally break into paternal sunshine)? And, of course, Georg and Amalia, bickering at work because they don't realize each is the other's anonymous pen pal and epistolary love interest. Matt Buzonas cuts Georg's trustworthy decency with a sweet yearning for a soul mate that bubbles into irrepressible joy when he finds one. And Cheyenne Barton's Amalia is no pushover, but her stubborn streak melts into radiant glee when she feels stirrings for Georg.

That it all happens here in such small but carefully crafted moments, strung together by Peter Stopschinski's joyful music direction, Leilah Stewart's clever set-pieces, Susan Branch Towne's elegant outfits, Allison Lowery's hair designs, and Natalie George's warm lights, is so endearing. It makes this staging what Amalia eventually makes of that unassuming little box: It's a gift.