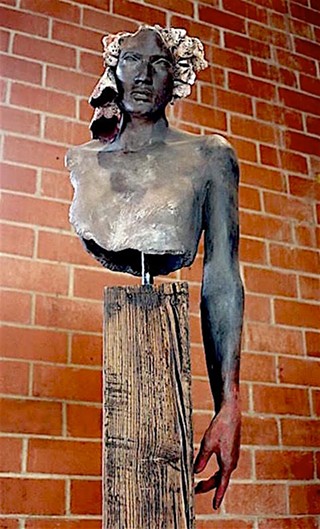 After creating much beautiful (and often a bit eerie) ceramic art for decades, most of which took the form of sgraffito'd pottery or intriguing fragments thereof, Alejandra Almuelle has her first solo exhibition at the new Dimension Gallery on Springdale.

We missed the inaugural show in this small and elegantly stark industrial space recently founded by Moya Khabele and Colin McIntyre, there at the eastern terminus of the industrial building that also houses the Daily Greens purveyors of fresh-pressed fruit and vegetable juice. We missed that first Dimension exhibition, a group show, and are still bummed that our schedule should crimp enjoyment that way. But we're informed that that show featured all the artists associated with the gallery, and now begins a schedule of solo exhibitions of those same talented makers – and Almuelle is the first one thus represented.

She's brought her whole family along, it seems, as the nine sculptures currently occupying Dimension are a sort of darkling clan, wrested from her subconscious, carefully wrought through clay and fired into human shape. No pottery here: The only thing functional about this "Locus" show is how clay – maybe a hundred pounds of it, as the song goes, maybe somewhat less – can function as a stand-in for humanity or for various fragments of what it means to be human.

Some of the figures in this show are adults, and some are children, and some seem a mixture of ages, all enhanced with underglazing and occasional additions of pigment. Each piece – a bust, perhaps, with odd growths flowering from the flesh; or a head-and-torso if not a full body, one arm bent toward the viewer, but also full bodies among them – is anchored atop its own wooden plinth: a preserved railroad tie attached to a wide iron base.

These sculptures of Almuelle's surround you in the gallery, backgrounded against the vertical grid of the walls' bare bricks or fronting the north window, the charcoal-hued physicality of the bodies or partial bodies an exquisite imposition of memories, of haunted interior states or dreamtime concerns brought into the waking world outside. They surround you in the gallery, in their temporary locus; and the memory of them will likely accompany you beyond – adding a new and subtle dimension, one you hadn't even realized was missing until you saw them, to the remainder of your days in this physical world.