For this year's Fusebox Festival, the innovative composer flies a batty Austin concert with live echolocation 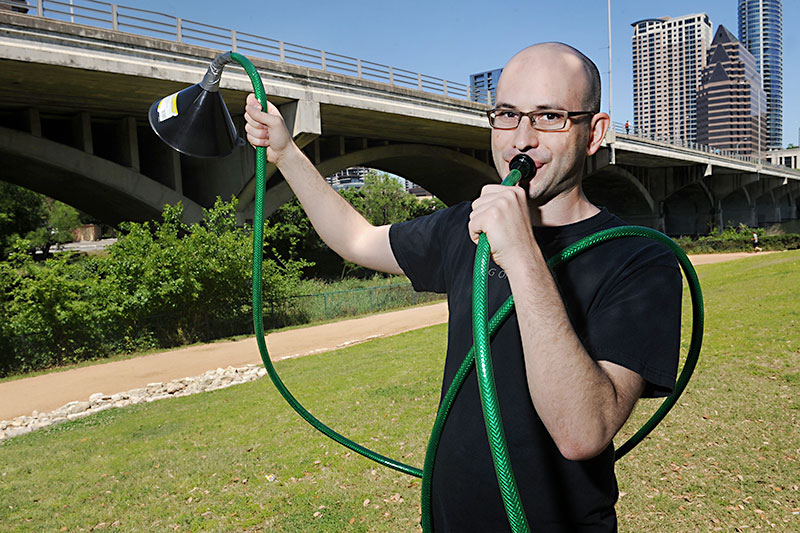 Steve Parker (Photo by John Anderson)
No bats, Austin-based trombonist and new-music fomenter Steve Parker assures us, will be harmed in the production of his latest spectacle of sound and structure. Not a single flying varmint of North America's largest colony of Mexican free-tailed bats, happily ensconced beneath the Congress Avenue Bridge, will be discomfited by Parker's interactive concert that's set to premiere as a final part of this year's Fusebox Festival.

The event is called Bat/Man, and you're invited to attend, and – like all of Fusebox – it's free. (See "Fusebox Condensed.")

Besides the bats, Parker tells us, the shells of giant mollusks are a big part of the composition. "And funnels," says the man who's also in charge of the SoundSpace events for the Blanton Museum of Art, the man responsible for last year's uproarious Traffic Jam concert that included community participants performing a chorus on their car horns. "Bat/Man will also have a megaphone choir," he adds, smiling.

Right – our interest is definitely piqued. So we sit down with Parker among the diversity of neighborhood sounds saturating the patio of Thunderbird Coffee on Manor and we ask the guy as politely as we can, "What the hell is this Bat/Man thing?"

Steve Parker: It's a piece for bat echolocation under the Congress Avenue Bridge. The bat calls are going to be pitch-shifted in real time so people can hear them, and then they'll be looped and manipulated in various ways. It also features an ensemble of conch-shell players.

Austin Chronicle: OK, is it that you had these two cool ideas – bat calls! conch shells! – and threw them together? Or is there some relationship between the conchs and bats?

SP: It's echoes. It's all about how sound reacts in space and specifically how it reacts with large concrete structures – in this case, the bridge. So we're going to have the bat sounds engaging with the structure, and the conch shells, and we're going to have funnels – all these directional sounds that are produced and bounce off of different things. And the way you perceive it, the way you experience these physical objects, has to do with the way the sound is produced and how far away the objects are from you, and what they're made out of. And we've got a megaphone choir – that's also directional sound – that will be echoing off different things. And the funnel horns, which are basically like garden hoses with an oil-can funnel at one end. And handmade echolocation devices, which were developed in the mid-20th century as a way for visually impaired people to perceive an aural map of their surroundings.

AC: Are the echolocation devices that are being played or the pitch-shifted bat calls going to, like, fuck with the bats?

AC: What led you to do this sort of thing?

SP: I was walking under the bridge at Waller Creek – there's a smaller bat colony under there – fewer than 1.5 million bats living under that bridge – and I was immersed in this chattering sound. And I was really interested in it, so I did some poking around online. But it wasn't until I met this bat scientist in Germany, two years ago, that things started coming together. I was playing a concert there, and I met this guy who happened to be from San Antonio. And he was there recording bats. And I told him how I'd experienced the bats at Waller Creek, and we kept in touch and started messing around with sound. I've also been particularly interested in the music of Alvin Lucier, who's a composer who works in sound – mainly the physical properties of sound and how we perceive sound. One of the pieces that he wrote in the Sixties was called Vespers, which was for an ensemble of echolocation devices, where the performers are essentially producing an aural map of their surroundings. It's a pretty open score, and that's the coda of our performance – the realization of Lucier's piece, but on a larger scale. And we're using his original designs for the echolocation devices, with arduino technology, to create a large ensemble.

AC: Where did you source the conch shells?

SP: There's a guy in Florida, the Conch King, who has a website – it's kind of a hilarious website – where, as soon as it's loaded, there's this MIDI classical music that's playing while he narrates a sort of description of the site. And he actually enhances the conch shells, cuts off the ends and puts brass mouthpieces on them. So that's where we're getting them.

AC: And the funnel pipes?

SP: They're something that are used in a lot of demonstrations for school children, to show them how a brass instrument works. It demonstrates how the length of the tube determines the overtone series that you're playing, and the funnel demonstrates projection. It's an abstraction of a French horn or any brass instrument, really, and you can make them easily from a garden hose and an oil-can funnel.

AC: Is this the first time that you'll be doing a megaphone choir?

SP: Yes, it is. I wanted to do something with voice, so we have the Texas Choral Consort with Brent Baldwin, and there's going to be a workshop period where we develop the vocabulary for what we're using. But it'll be spatial, so the choir begins not onstage but away from stage, reflecting their sounds off various surfaces, and then eventually gravitating toward the central axis where a lot of the performance happens. Same with the conch shells and the funnels.

AC: Let me pretend that I'm a complete philistine for a minute here, like I'm your 87-year-old aunt whose favorite musician was Lawrence Welk. So, ah, "Why do you DO this? Why don't you do any NORMAL music that NORMAL people will like?"

SP: Well, I do. I went to school for classical music at, among other places, UT. But I prefer to work in a realm that's maybe not as saturated. I'm also interested in creating opportunities for people to engage in sound in novel ways, in ways they wouldn't normally experience sound. For them to engage interactively and on a deeper level than just listening passively.

AC: So the audiences at Bat/Man are going to be involved in the concert?

SP: It's an immersive performance, so they'll be immersed in sound. But also, at the end of the piece, we'll be providing them with some sort of echolocation device, whether it's one of the battery-operated devices or something simple like a clicker, but something so they're able to interact within the space with the sound that they're producing.

AC: Did you propose this to Fusebox, or did [Fusebox director] Ron Berry say, "Hey, Steve, do something for us!"

SP: I proposed it to them sometime last year, I think even before we did the Traffic Jam piece, and I'm glad to finally be able to realize this. We're still kind of workshopping a lot of it, because it is a cooperative process. I tend to work very cooperatively with the different organizations or the different communities involved, so for this there's a pretty substantial phase that involves workshops where I'm building echolocation devices with Austin Soundwaves and Anthropos Arts, and workshopping the conch shells with some of my trombone students, and with Texas Choral Consort. We'll be doing a device-building workshop during Fusebox, too. It's a multilayered process where the end result is a big spectacle of performance.

Bat/Man will be performed Sunday, April 10, 7pm, at the Bat Observation Lawns on the south end of the Congress Avenue Bridge. For more info, visit www.fuseboxfestival.com.

A version of this article appeared in print on April 8, 2016 with the headline: Song for Bat/Man