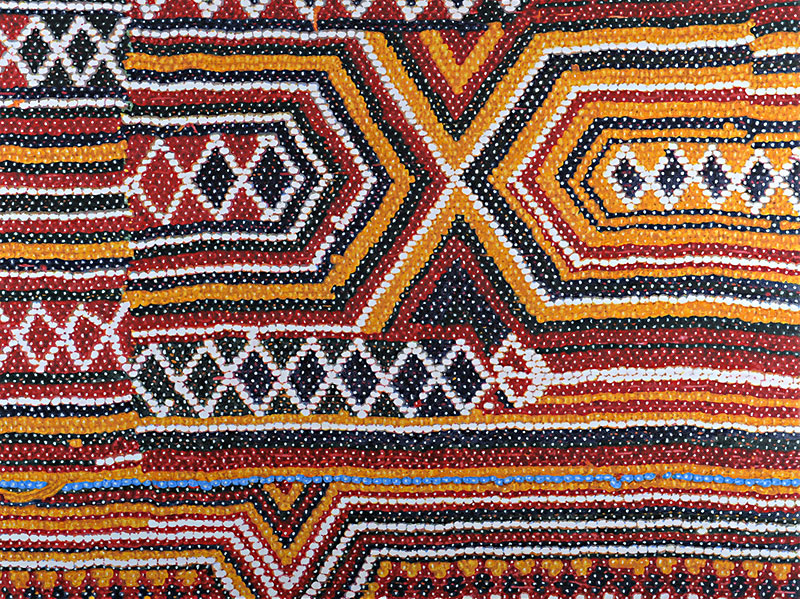 It's significant that the Lora Reynolds Gallery doesn't include wall labels. Labels are a crutch, and I can't stand them. In the case of "Frank Selby: High Writer," the lack of labels adds emphasis to the best thing about the gathered work, which is its discord. The show features only eight pieces, but much joy comes from trying to fill the gaps between them. A medium-sized painting of a sculpted head is followed by three much smaller graphite renderings of black-and-white collages made from film stills, which are then followed by a larger painting of a brightly colored textile. The other pieces are no more obviously cohesive than these, and I find this thrilling. Each piece pops, and while they find their true strength in conversation with one another, individually they provide ample opportunity for query and surprise. I have no clue what is happening in Johnson Weekend, one of the film-still collages, which features a man in a suit, glaring from a crowded room as if he's been captivated by something ugly, but it doesn't matter. I am given enough information to want to know, and that is a victory.

For this series, Selby took images of "valorized" objects from books and meticulously copied them in graphite and paint. The basic question he seems to want to answer is: What, if anything, is honest about an image? By attempting to re-create a photograph, which he obviously cannot do perfectly, he is emphasizing the image's failure to be real.

As I mentioned, the pieces are at their best as a group. The textile painting, Mat, might turn decorative if isolated. This is a result of the work's most exciting quality, which is its role as documentation of an artist in the midst of discovery. Selby seems to be figuring out the fundamental nature of the relationship between images and objects – between artifice and truth. It is a compelling adventure to be on and an intriguing one to witness.

The statement that accompanies the show is heavy (the word "semiotics" comes up), but just as I'm uninterested in wall labels, I also don't need the theory. Anyway, the statement hardly touches on what, to me, really makes the series special: the story of these specific objects in the context of Selby's exploration of truth. For example, the artist mentions that a previous incarnation of the series focused on photographs of French political protests, but he got tired of people thinking the protests were the point, so he moved on to other source material. One of the new pieces, Brooch, is described as depicting an object that was formed, in part, by political circumstances, but that continuity in his content is dismissed for the sake of the image-versus-reality conversation, as though the implications of politics entwined with photography's potential to lie are simply irrelevant. I don't buy that. I want Selby's politics, whatever they are, to be front and center.

Actually, I think Selby secretly loves his content, or at least he should, because he has a talent for selecting imagery that engages. If he can continue to mine that drama and merge its meaning with that of his process, I believe he'll find the truth he's looking for, and we will all be beneficiaries. But even if he doesn't, "High Writer" offers some truth of its own and ultimately coalesces as a rewarding investigation into what it means to question.