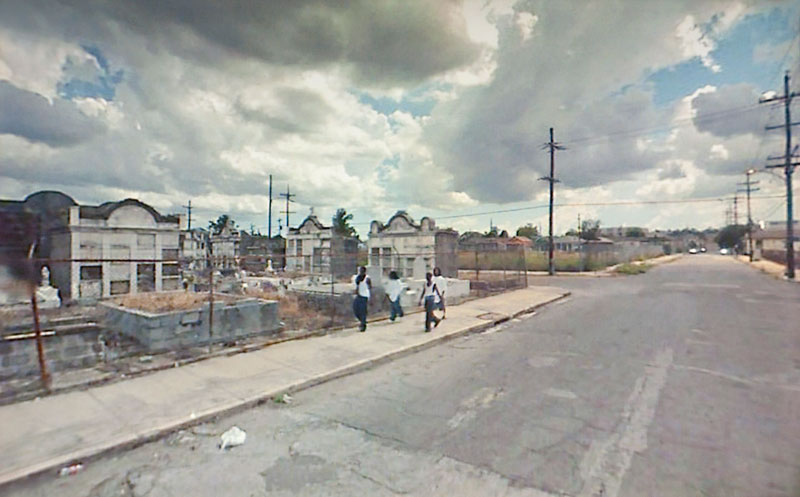 Among the most menacing, disturbing, and beautiful photographs I have ever seen is one currently on display at the Harry Ransom Center as part of its "Look Inside: New Photography Acquisitions" exhibition. In this image from Doug Rickard's series, A New American Picture, four young black men walk down a dilapidated New Orleans street, bare save for some distant cars. Trash cozies up to the curb. A rusted chain-link fence guards an overgrown lot busy with brick ruins and dominated by multiple stone edifices. They call tombs to mind; this may be one of the city's storied cemeteries.

Overhead clouds haloed with sunlight crowd the sky. The young men, in white T-shirts and tank tops, seem to stride through the scene. They are the only living beings in the image. The landscape is gray; it is gothic. The young men, however, are dynamic. They own the place, as one might think they would. It is their neighborhood, after all. As unwelcoming as it may seem to outsiders, these men belong entirely.

A blur is cast over the entire photograph. The men's faces cannot be seen in any detail. A plastic bottle in the foreground is only hinted at with some color and shape. A smudge on the far left turns parts of the lot and fence into unintelligible noise. The effect is lively. The picture has a texture, like a painting. In fact, while the image may most superficially resemble a piece of urban photojournalism, for me it is more like a painting by 19th century English landscape artist John Constable. At first glance, one might see very little in common between Rickard's gritty, digital street life and Constable's farmhouses and rolling countrysides. However, their skies are the same, composed like ocean waves, constant and expansive. In addition, the painterly effect of thick, unruly color is as much a factor in one as in the other, so that in each artist's work one sees a still scene made active and tangible.

It is this tangible quality that makes Rickard's photograph so enticing, and it's made all the more so by his process: He mined Google's Street View for street scenes, composed his images, and took photographs of his computer screen. The process affirms the realism as well as the ephemeral quality of the moment, both of which are duly honored by any powerful photograph.

I've left my description of the process for the end, because far from gimmickry, it is only tangential to the work itself, which is the highest end an artist can ask who makes use of new technologies. What is remarkable about the photograph is not how it was made, but how the artist has managed to combine composition, color, finish, movement, and subject to make work that is visceral, political, and cultural.

It is also a plain joy to look at.

Rickard is one of multiple artists whose work is included in "Look Inside." While his was the piece I felt most personally moved by, it was not the only one. To put it simply, this is a powerful show. It is reflective of the richness of the Ransom Center itself, a diverse and deeply varied arts collection that has earned its international renown. The best museum institutions, like the best art, convey the urgency of human experience in their makeup. The Ransom Center is one of these. "Look Inside" is just a sample. Don't miss out.