The grandmother in the tiny Manhattan flat is the heart of the quiet, thoughtful 4000 Miles by Amy Herzog 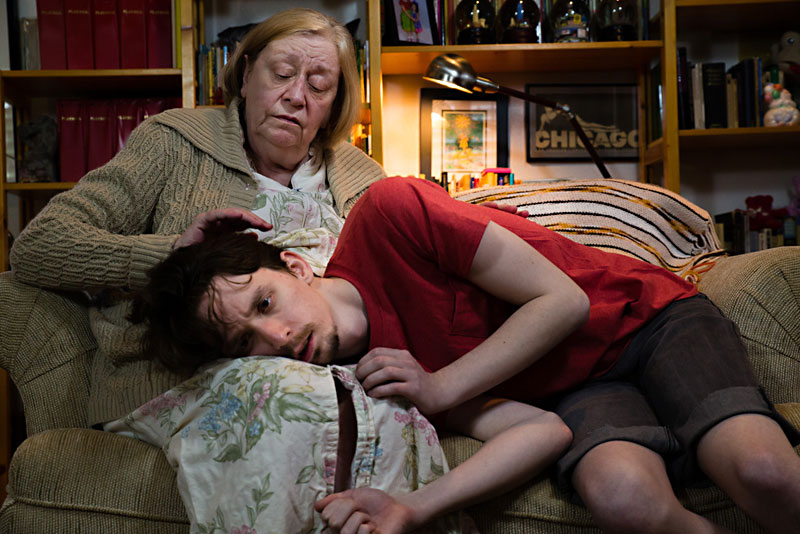 To Grandmother's house we go: Jennifer Underwood and Will Douglas (Photo by Errich Petersen)

It's not just anybody who'd answer the door at 3am and embrace an unannounced houseguest. The matriarch in Amy Herzog's play 4000 Miles does. Vera (Jennifer Underwood) is a bit perturbed with her grandson Leo (Will Douglas), who has at that moment completed a bike ride across the entire country, but she isn't overly fazed. Instead, she welcomes him and his bicycle into her tiny Manhattan apartment, where he winds up camping out for a few weeks, avoiding most of his current problems in life.

In this production from Different Stages, Leo strikes one as a youthfully lost soul. His relationship with his girlfriend Bec (Andrea Flowers) is ending. He doesn't get along with his parents. He resists any conventional means of living, like school or a job. He's not even particularly gracious as a guest of his grandmother, who tolerates most of his lousy attitude as she waits for him to come to terms with the central traumatic event of his journey across the country.

If this sounds a little like a play about someone else's therapy, it kind of is. Herzog's script gained positive attention when it was first produced, but ultimately it's not an original concept or an especially insightful work. The writer has made it known that many elements of her work are autobiographical and take inspiration from her Marxist family and unconventional grandmother, and for many audiences, the draw will be one of comfort. A grandmother willing to smoke weed with her adult grandson late at night and argue the politics of an individual's contribution to a community is less a radical character in American theatre and more of a serving of artistic comfort food for audiences who want something a little naughtier and a little further to the left than Everybody Loves Raymond.

Karen Jambon's direction takes the script at a leisurely pace through the story, padding any number of emotional exchanges with air. The actors play their parts ably enough. The most jarring aspect of the production lies with the apparent lack of perspective of the three younger characters who appear in Vera's apartment. As portrayed here, none of them ever reach a state of ease in Vera's presence, even Leo. They wait for anything – a visitor, a phone call, a decision – with the same level of anxiety that most people experience when waiting for a medical diagnosis, yet in the larger scheme of things, they're average characters bumping up against non-urgent events.

In that light, Vera as a character and Underwood as a performer provide a metronome to the worries and grievances of the younger generation. While she is a sharp character with any number of great lines, it would have been nice to see a scripted part for an older woman that included a greater and more independent arc rather than a consistent drumbeat of support and a reminder of mortality.

Ann Marie Gordon's set design is realistic and appealing. It conveys the confines of a fixed-rent Manhattan apartment well. Patrick Anthony's lighting design is almost too dark at times; it's a challenge, no doubt, to give enough light for an important conversation but still convey what a tiny apartment would look like in the wee hours of the morning.

The program notes refer to 4000 Miles as a chamber play, and it is. Quiet, thoughtful, and small, it is a calm work that profiles a curious and troubled family.