Director Tracy Arnold stages William Inge's drama with humor and charm, but seems to fight against the script's darkness Keeping live theatre interesting sometimes means putting a different spin on a show than the playwright may have intended. For example, in 2007, Hyde Park Theatre took Martin McDonagh's dark, dystopian The Pillowman and focused on the dark comedy element with great success. In 2014, Austin Playhouse converted Venus in Fur, David Ives' psychological/sexually political power struggle, into a delightfully fierce and thoughtful sex comedy. With skilled and thorough analysis, one sees what a script can be rather than what some may think it should be, which can be compelling if justified. That said, it's a huge gamble that doesn't always pay off completely, as with the City Theatre production of William Inge's Bus Stop.

Director Tracy Arnold's program note makes clear that she understands the play as a character study of mid-20th century Midwestern denizens and the many affectations their surroundings and lives create within their stases. Arnold mentions Inge's willingness to leave his characters an "out" from their lives, and the set design by City Theatre Artistic Director Andy Berkovsky reflects that, leaving many gaps and holes in the partially suggested greasy spoon diner, home for the evening to a litany of colorful characters, refugees from a snowed-in bus. But the production seems to fight against the dark underbelly of the script – where the strength lies – rather than examine it with a complementary lens, favoring a lighter, safer presentation. While humorous and charming, it left me hungry for further exploration.

We're dealing with some powerful stuff within the many simple stories: Bo the cowboy basically kidnapping a young showgirl in order to force marriage on her; a quickie affair between Carl the bus driver and Grace, the diner's married owner; and Dr. Gerald Lyman, a pedophile Ph.D. setting his sights on Elma, an underage waitress. And yet Arnold's staging feels like a lighthearted comedy, playing up the funny and not fully exploring these characters and their situations. The stakes just don't feel as high as the stark situations warrant, as many of the actors play on-the-nose emotions more often than connecting with each other and advancing the dramatic action.

A notable exception is Beau Paul as Virgil, Bo's companion. Paul plays his character with ease, living fully within a quiet mentor role and shining. Christina Little-Manley (Grace) and Jesselyn Parks (Elma) also inhabit their characters naturally, each with her own charm. As Dr. Lyman, Robert Stevens' performance feels a bit forced in an admittedly challenging role, with stilted and strange dialogue that Stevens doesn't quite find a home in at first. He manages to settle into his performance later – when the character is intoxicated, curiously enough – and maintains a high creep-factor throughout. Clay Avery's Bo has little texture for such a rich and swarthy character, swinging wildly from anger and arrogance to sheepishness. We don't quite see the many layers possible of Cherie, played by Evelyn LaLonde, who brings to the kidnapped songbird a likable quality, but not the depth made available in the text. Theirs is a problematic storyline from the start, though further details may enter spoiler territory. Suffice it to say, the end of Bo and Cherie's journey may ruffle some feminist feathers, deservedly. Rod Mecham plays a stand-up sheriff, while Daniel Norton plays the bus driver – both capably but with a rather muted quality.

The symbiotic relationship between actor and director is important; the actor must know when to give more, and the director must know where to rein in. To that end, I don't think Arnold fully realizes the production she envisions with her program note, nor has she given as compelling an alternative telling as possible, but it is admittedly rather funny and not entirely unsatisfying. The problem here was execution – whether it was trusting the writing or working more with the actors on a deeper connection, audiences may leave feeling like the story could have held a lot more for them than lighthearted laughter. 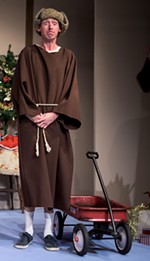