With Will Eno's comic drama, HPT brings a funny kind of fear to the 'burbs 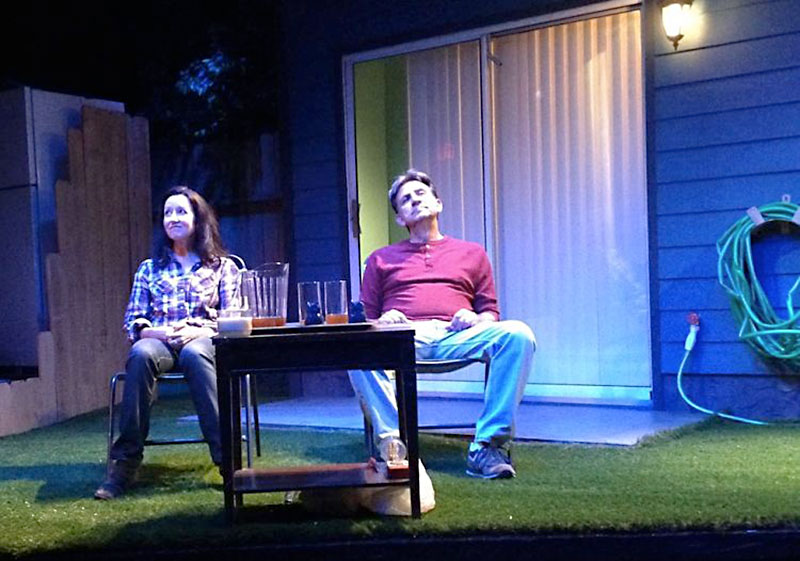 The backyard of a suburban home, complete with fence and swath of green grass. Two couples – one older and settled, one younger and new to the neighborhood. An attractive, ordered setting with a sense of ugly disorder lurking below the surface. Wait, haven't we been here before?

To anyone who saw the Capital T Theatre production of Lisa D'Amour's Detroit at Hyde Park Theatre in 2014, The Realistic Joneses may provoke an acute case of déjà vu. In locale and structure, Will Eno's comic drama is a twin to D'Amour's, and the set for HPT's staging echoes that of Cap T's Detroit, with Cap T Artistic Director Mark Pickell providing for HPT Artistic Director Ken Webster's show what designer Ia Ensterä did for his months ago: the rear view of a quintessential suburban tract house, conjured with a surprising expansiveness for the minuscule stage here and rendered in such detail that you can almost smell its manicured lawn.

But even if you didn't see the earlier show, you might well find the suburban setting for The Realistic Joneses eerily familiar: It's one we've been exposed to countless times before, in pop culture spanning Leave It to Beaver to American Beauty to Kirk Lynn's recent novel Rules for Werewolves, and, of course, for many people, it's just where they grew up. Eno makes it pleasant enough at first, with Bob and Jennifer Jones side by side in lawn chairs gazing at the night sky. But it isn't long before he cracks that tranquility, sowing hints of marital discord between the two, introducing neighbors John and Pony Jones (yes, they share the same surname) with an air of awkward intrusiveness, and revealing that Bob and John are both ill – indeed, are suffering from the same illness. This last may be Eno's cue that his play is about dis-ease, a lack of comfort in the place where one lives, in one's body, in one's life. What initially strikes us as a curious coincidence of names and maladies is perhaps just an extension of the sameness of suburbia, the lookalike subdivisions with their cookie-cutter domiciles inhabited by homogeneous nuclear families, headed by breadwinner dad and homemaker mom. It suggests that all these Joneses are interchangeable to a degree, at least where their discomfiture is concerned. They talk a lot about what scares them, and these fears weigh so heavily on them that at times Eno's play feels like a middle-class – and much more polite – reworking of A Delicate Balance, Edward Albee's ode to existential dread. Where the upper-crust East Coasters of that play swap scabrous insults as they talk their way around "the terror," the Flyover Country suburbanites here never poke a hole in one another's opinion or how it's stated without rushing in with an apology. ("Sorry" may be the play's most frequently used word.)

What we come to see is that these Joneses are all stuck: in their homes, their marriages, the way they connect (or mostly don't connect) with others. It's as evident in the faces here as in the characters' fractured, clumsy attempts to communicate. You see it in the tight-lipped glare of Webster's easily irritated Bob; the pleading look of Rebecca Robinson's increasingly exasperated Jennifer; the darting gaze of Jess Hughes' quizzical, quick-to-blurt Pony; the dimming light in the eyes of Benjamin Summers' downward-spiraling John. And the lack of movement in Webster's staging accentuates the sense of stasis.

This isn't to say that The Realistic Joneses is unrelievedly bleak. Eno's mastery at puncturing our linguistic follies shows in almost every exchange, and Webster knows how to mine it for laughs. (With this gifted a cast, it's no surprise that their efforts succeed consistently.) Still, beneath the comic quips of these Joneses, something deeper can be sensed: that yawning void that ultimately awaits us all and that leads critics to invoke the names of Beckett, Camus, and Ionesco when discussing Eno. Yes, we've been here before: It's the 'burbs, where every lawn backs up to the abyss.