This show's three artists display creative, complex alternatives to the meat sacks we all share 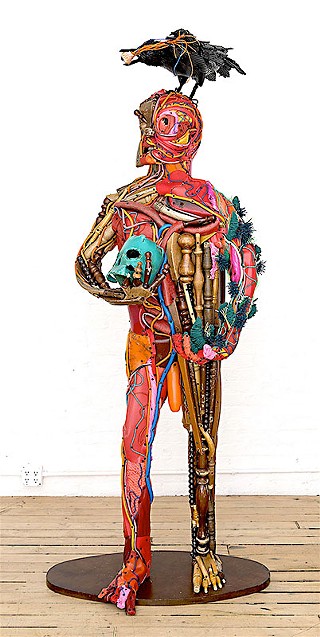 The Long Walker by Johnston Foster

The body. We've all got one: a moist, meaty collection of tubes and lobes and sacs that both generates and provides a vehicle for our (ever so vaunted) human consciousness. Makes sense that the more artistically inclined among us will sometimes focus their own consciousness on exploring that very thing, on creating art inspired by living flesh. And here we are at MASS Gallery, where the "Body Talk" works of Irena Jurek and Johnston Foster and Jared Theis share the walls and interiors of the Eastside space.

The walls are definitely Jurek's realm, her two-dimensional drawings lining the vertical plane with depictions of, mostly, cartoon-animal eroticism. You know, like you might find in some Tijuana Bible treatment of old Warner Bros. characters? Except that Jurek's not scrimping on the linework, not depicting her often pornographic tableaux with the sort of minimalist rendering usually required for commercial animation. No, there's an abundance of drawn texture to all of these pictures, increasing the sense of realism and multiplying the visual impact, its omnipresence implying one overarching personal mythos that joins the individual images. The artist's marks are mostly black and white but include striking forays into color. Near-obsessive, some of the patterning here, to good effect – no less so when backgrounding a tree than when highlighting an act that the sillier Internets are pleased to refer to as teh butt secks.

Foster excels in precise conglomerations of industrial refuse, turning scraps of extension cords, vinyl flooring, steel wire, furniture parts, scouring pads, construction studs, et plastic cetera, into parts of surrealized, vibrantly colored human bodies. Or, in the case of The Long Walker, an entire life-sized humanoid who holds a homo sapiens skull in one hand and has a two-headed raven perched atop his noggin, the raven beaks clamped tight on a nerve-trailing eyeball recently ripped from one of that humanoid's ocular sockets. Norse myth meets Grand Guignol in Austin's Cathedral of Junk? Holy Trashman, the thing is as impressive and imposing in its painstaking, vivid design as it is in sheer size.

Theis isn't satisfied with doing that same sort of Johnston Foster thing with ceramics, although his multipartite suite of sculpture might be construed as such a thing: so many separate pieces of fired but unglazed clay in the form of tubes and knobs and discs and rough spheres, carefully joined to create complex works called, simply, Sculpture 1, Sculpture 2, and Ceramic Suit. When we say the artist isn't satisfied with just that, we mean there's a whole separate section of MASS Gallery that displays Theis' other creations – faunal objects that also incorporate ceramics but are heavier with fabric, lace, and yarn, like some crochetpunk's three-dimensional homage to the more outlandish visions of Jim Woodring. These are displayed inside a small room where the walls are brightened with projected animations of those improbably shaped and colored creatures doing what comes, for them, naturally.

This three-person show works well together, joined as if it were one of the works contained within, and makes a body – any body, we reckon – glad to visit such a smartly appointed venue. 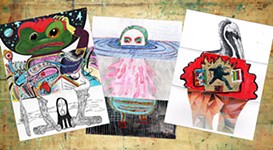