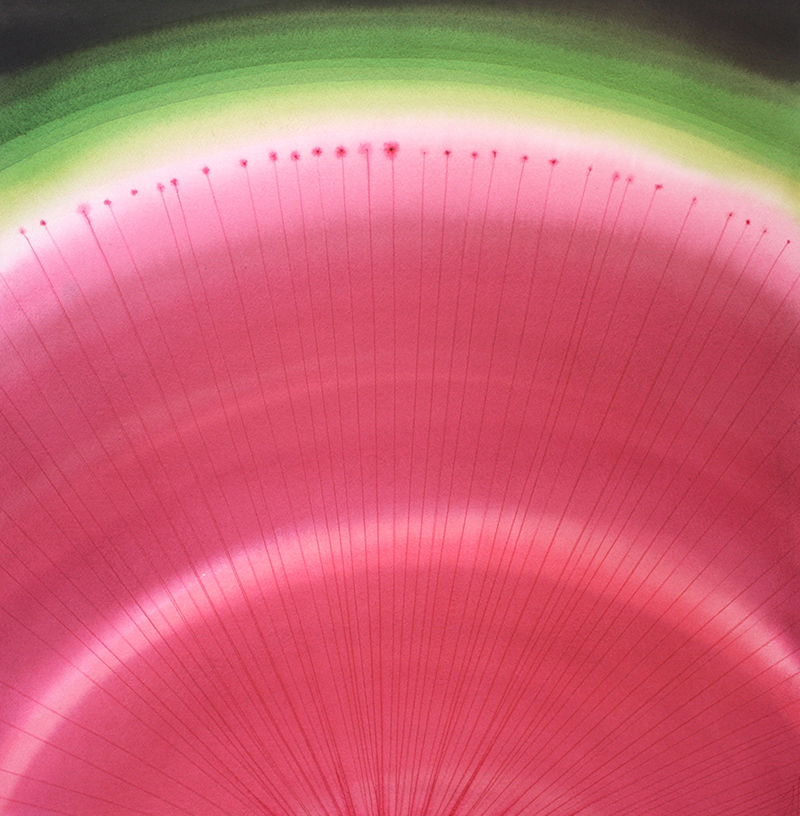 
You've been to a farmers' market, yes? Maybe you've been to more than one. Maybe you've been to several in such tight succession that they've begun to haunt your dreams, your nightly oneiric realm flooded with the imagery of edible vegetation, the botanical panoply of colors all translucent and vivid: some pond-bound naiad's memory of stained glass windows.

If so, Jan Heaton has been in your dreams like Freddy Krueger's lawful-good sister and has reproduced your visions in watercolors that fill the Davis Gallery's main room with delicate, rhythmic beauty on sheet after oversized sheet of artist-grade paper.

Of course, we're being all poetic-license here. Of course, those are Heaton's visions from her own farmers' market sojourns, now rendered in "The Market" exhibition with a lyrical precision that dances within the representational spectrum between abstraction and realism. (Most of Heaton's work wreaks a visual terpsichore in that liminal zone, an area as appropriate to watercolor as watercolor is to Heaton's often floral choice of subject.) And so we're treated to large expanses carefully stained with images that aren't merely approximations of limes and clementines and watermelons and Swiss chard and artichokes and so on, but that are also depictions of the essence of those plants.

At times straight-up illustrating a single vegetal cross-section (Watermelon Radish), at times opting to translate a plant's appearance into a scattered quadrille of color and rhythm (Squash Blossom), Heaton brings her inspirations into the waking world with such evocative skill that you might think you're walking through a dream. One grounding factor is also a sort of budget-friendly bonus for the less financially padded collectors among us: In the midst of the gallery's array of big paintings – each 20" x 30" and even larger – is a wall featuring a grid devoted to the artist's tinier (3" x 3") studies of what she's seen at the market.

All these works are originals, to be sure, the big and the small; and it might seem gauche to mention anything about wallpaper, considering the state of wallpaper in these benighted times. But your reviewer looks at the plant-celebrating loveliness of what Heaton has done with aqueous pigments on paper and can't help but wish William Morris were still around so that the two of them could collaborate on a project or two, or that the master of Kelmscott Manor might produce limited-edition, room-enveloping swaths of Heaton's finest forays into pattern and shade.

But, yeah, you're right: Why gild the lily when Jan Heaton rendering it (or just about anything) in watercolor will more effectively enhance its beauty?

A version of this article appeared in print on March 11, 2016 with the headline: "Jan Heaton: The Market"