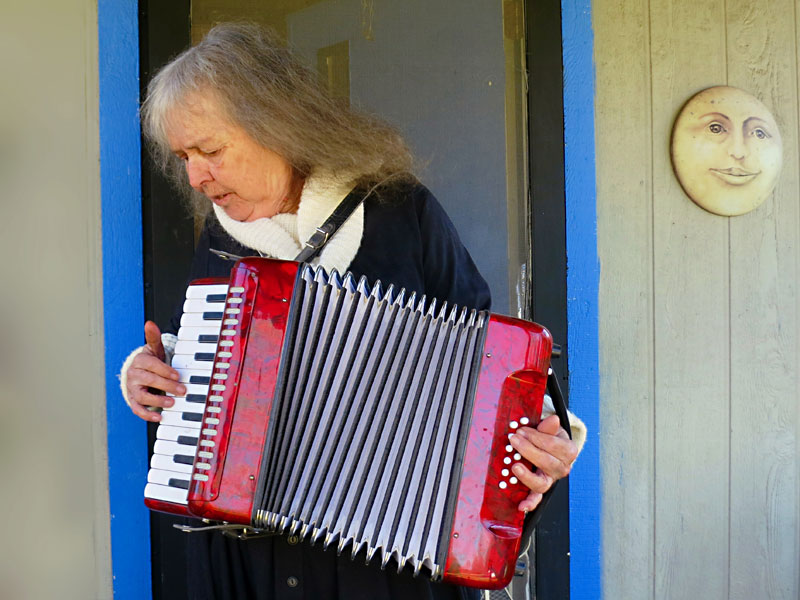 "I tap my chest a couple of times and say, a little heart, man, a little corazon – CORAZON, I say close up to him clenching my fist and shaking it over my heart," Pat Littledog writes near the end of her story collection Afoot in a Field of Men. The author Pat/the character Pat is talking to a man rifling through the meager possessions of a family being evicted in the night from their East Dallas home. The scavenger crudely relents and struts away.

Littledog's book resonated, popped, and glowed in the early Eighties when it won the 1983 Austin Book Award and was first released by her now ex-husband Chuck Taylor's Slough Press, then picked up by Atlantic Monthly Press and repackaged and padded with additional stories for a national audience just as she was chosen for a Dobie Paisano fellowship in 1986. Meanwhile, she and Taylor ruled the Austin literary scene from Paperbacks Plus, where they staved off poverty by living on-site and fed their poetic souls by hosting endless author readings.

Reviewers seemed both in awe of her writing and baffled by it. "These stories play out like memories and blend into one cohesive narrative, the way Sherwood Anderson's Winesburg, Ohio did," a People magazine reviewer wrote. John Skow at Time said, "Good stuff, anyway, whose major virtue is that it is extraordinarily lifelike. Which is to say, messy, disorganized, contrary, repetitious, tacky, funny, if you are in the mood for that sort of thing – and in need of laundering." Its unique, ramblingly poetic, and lively voice spoke of being poor and female in an era that seemingly valued neither. It was the persona of an odd, restless neighbor sharing a joint on the back stoop at night and spinning improbable yarns.

Afoot in a Field of Men is quietly back, republished again by Slough Press in close to its original format, at a time when Littledog, now 74, finds peace about 20 miles from Austin in a rural, mud-caked, 10-acre corner of Caldwell County that has become a family compound, with one house apiece for Littledog, her two sons, and one daughter. "I never lived in one place for very long," she says from her manufactured home with Sandra Cisneros poems taped to its kitchen cabinets. "I was unstable. I prayed to God to stabilize me. This land is paradise to me. It's called practicality. Not only do I not want to move from the land, I don't want to go very far from it."

She and her late friend Vernon moved into a tent on the wooded lot in August 1997. There was no electricity or running water. They slowly built. Littledog says her guiding principle is optimism. She begins every day the same way: with a few puffs of marijuana and a talk with God. "When I smoke my joint and say my prayer, I somehow feel better," she says. "I don't have to worry about things any more. God will look after me. Just like in the last story in Afoot in a Field of Men, where I tell my neighbor it will get better. I believe it will. If you believe in your heart, it gets better."

Littledog was born Pat Ellis in College Station, the daughter of a career military man whose job meant constant moves around the U.S. and twice to Germany, including a final stint as she entered her teens. Littledog takes a seat at a piano just separating her living room from the kitchen and plays the German song "O Susanna" despite a left hand still slowed by a stroke suffered years ago. As opposed to the "don't you cry for me" American tune, Littledog says, this one speaks of "how beautiful is this life." Her father's family for generations back were East Texas farmers/musicians. It was a combination that kept them poor, Littledog says, until her father's efforts at stability. She loves the music and mystery of life. A red accordion rests in the corner.

"I tell people I'm just naturally curious," she says of writing, which she still does every day – sometimes a poem, often a journal entry. "How did that happen and what made them do it?"

Littledog's own story took her to Ohio, where she graduated high school and endured an unhappy and semi-suicidal semester of college. Her roommates thought she was trashy, and another girl wanted to date her. She ran off to El Paso to live with an uncle and, at 18, met and quickly married a newspaper sports editor six years her senior. She had one child after another, worked secretarial and clerical jobs, and graduated college as her husband morphed into an ad agency exec who drank and eyed other women. They divorced, and she went to graduate school, where she met Taylor, a poet and professor, and got serious about writing.

The first mystery that intrigued Littledog was Jewel Babb, a healer living in the desert near El Paso who had become a star in the area's counterculture. Littledog wrote an article about her and wanted to write a book as part of her Ph.D. at the University of Utah, but her advisers wanted more fiction. She, Taylor, and her children moved back to her grandparents' East Texas land, and she wrote the book anyway as Border Healing Woman. "The house was funky," she says. "The floor sagged, and there was always water under it. Once it rained a lot, and I saw a duck underneath."

In 1981, they moved to Dallas, where Littledog did some freelance writing for the Dallas Morning News and found the grist for Afoot in a Field of Men. She was a Kelly Girl working temp jobs and eking out an existence. During downtime, she took notes on the working world that she would later craft into stories while on break at the bookstore in Austin.

"I call them factions," Littledog says. "My daughter Brook says, 'To my mother they're autobiography; to me they're extraordinary fiction.'" Indeed, the main character is named Pat, who is the rock at the center of a swirl of impending disaster. In the often-anthologized story "Leaping Leo," Pat and Leo (a stand-in for Taylor) get by doing a string of menial jobs while dreaming of a more poetic life. "But I never seem to be myself alone, that sharp, thin blade of a female fantasy-companion fit for a gypsy-poet-man," Pat the character/author tells us. "I always seem instead to have these children tying me to the world of work."

For Littledog, that conflict became a way of life. "I'm a working fool," she says and points to the cover of the book and its image of a shoeless woman. "I am a poor person. Men tend to be more above me, and I tend to be more afoot. The men have shoes." But is the author as solid as the character in her book? "I don't go to pieces," she admits. "I'm not whiny."

For the record: Pat Ellis-Taylor wrote the first two versions of Afoot in a Field of Men. Pat Littledog wrote this one. She says she was at a Rainbow Gathering – a sort of hippie environmentalist precursor to Burning Man – walking and praying and saw a beautiful red fox run off into the sky. "I said it's a dog, a little, little dog," Littledog says. "It was a vision telling me if I prayed and was sincere about it, I actually could do whatever I wanted to do. I believe in God. I believe in superstition. I believe in dreams. I believe in visions. I know all of the stuff has come to pass."

When she and Taylor divorced in 1990, she made Littledog her legal name. At her Caldwell County home, Littledog's pet shih tzu scurries across the room. "I call him Little Dog," she says. "He and I are just as ornery as can be. I tell him to go and he comes."