Magdalena Jarkowiec's Us Kids Are Alone in the House 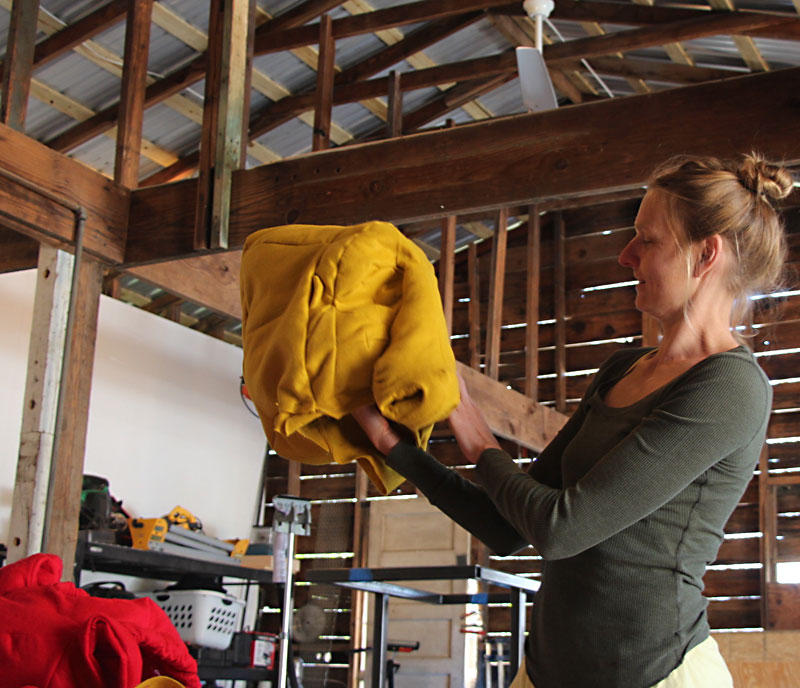 South of Ben White Boulevard, behind a little house, is a converted barn that artist Magdalena Jarkowiec shares with her husband, a contractor. His half is stocked with tools and lumber, while hers is fitted with cloth-covered tables, two sewing machines, two person-sized plastic bags filled with polyester stuffing, and fabrics in various stages of construction into humanlike figures, body parts, and a television. Resting in the middle of one table, next to the iron, is a cantaloupe-colored penis. It's made of smooth fabric, the kind someone else might make a sundress out of. Its details, rendered in thread and puckers, are sketchy yet meticulous, and it has been carefully stuffed into shape.

Its length, you may be wondering, is about four inches, stuffed, which is about the same number of inches that Jarkowiec is taller, at six feet, than the average person. She is perplexed and fascinated that this taking up of a mere four extra inches of space – she marks them off with her fingers on a red measuring tape – renders her, in some contexts, "a beast." "I feel like the way we take up space is so wildly relevant. I think that's why people get nose jobs," she explains, wearing slippers and sweats, alternately leaning over the sewing table and doing pliés. "Shape has disproportionate relevance to who people think we are."

Jarkowiec removed the penis, voluntarily, from one figure of a troll-like duo – only one of them was endowed and "it didn't really need it" – that was recently accepted into the People's Gallery at City Hall. An isolated nose, mounted on a small board on a back wall, is a supporter's gift for the crowdfunding campaign for her dance-installation work, Us Kids Are Alone in the House. For Us Kids, a trio for members of Austin Community Ballet – just one of Jarkowiec's affiliations as a dancer and teacher – she is creating giant heads that the dancers will wear like hats. She regards one in progress, stitched in mustard-colored felt and endowed with a long, eggplant-shaped nose, small seamed ears, and structured cheeks. "It doesn't quite make sense where all the features are. I think this is where we want to go with it," she declares to dancer Kelsey Oliver, who suggests that it calls to mind a piece of cloth that has fallen, serendipitously, into a facelike shape.

Another in-progress sculpture in the barn, "Cody Standing on One Leg," isn't part of the performance but suggests something about how Jarkowiec's dance and soft-sculpture work collide. "Cody" has a large, masculine head with disarming pupils of cross-hatched stitches, but its delicate torso reclines in either repose or atrophy, and the only leg narrows in a way that's elegant but for the lumpiness of the stuffing. Growing up, Jarkowiec danced at a public arts high school in Baltimore and learned to sew from her Polish grandmother. She began sewing sculptures as an undergraduate at New College in Sarasota. "The Gummo-ness and the brightness of Florida had something to do with why it even occurred to me to do this," she says, referring to the 1997 film about the warped youth of a desolate town. Since arriving in Austin, by way of San Francisco, her sculptures have taken up in public spaces and community gardens, and she's made costumes for other performers, though none as strange as those she makes for herself. Her 2014 work "Some People Are This" featured herself, hair in pigtails, and two other women wearing large stuffed sleeves that gave their arms the shape of turkey drumsticks, doing ballet steps to Bach.

Jarkowiec's launchpad for Us Kids is the experience of being a latchkey kid in an adult-structured home, which isn't so different, she notes, from being an autonomous adult in a structured world. She's sewing the Eighties-era television set and some teacups, objects with "an aura of authority," so her dancers can crash into them. The soundscape includes an episode of Taxi, complete with laugh track and commercials – reruns being an act of rebellion, for a certain generation, against the didactic schmaltz of the afterschool special. Dance might be described as the balance between rebellion and momentum. At a 2010 gallery show in San Francisco, the penises of Jarkowiec's mutant figures, which were housed in tents and tucked into beds that manipulated their relative sizes, were intact. "In San Francisco, I never, ever, ever, ever" – she's taken aback by the thought – "would have thought twice about leaving a dick on something."

Us Kids Are Alone in the House will be performed March 3–5, Thu.-Sat., 8pm, at Salvage Vanguard Theater, 2803 E. Manor Rd. For more information, visit www.magsjarks.ticketleap.com/uskids.

The Sidekicks will be on display through January 2017 at the People's Gallery, City Hall, 301 W. Second. For more information, visit www.austintexas.gov/peoplesgallery.