The script for this baseball play is a bit wobbly, but Austin Playhouse fields a strong production for the win 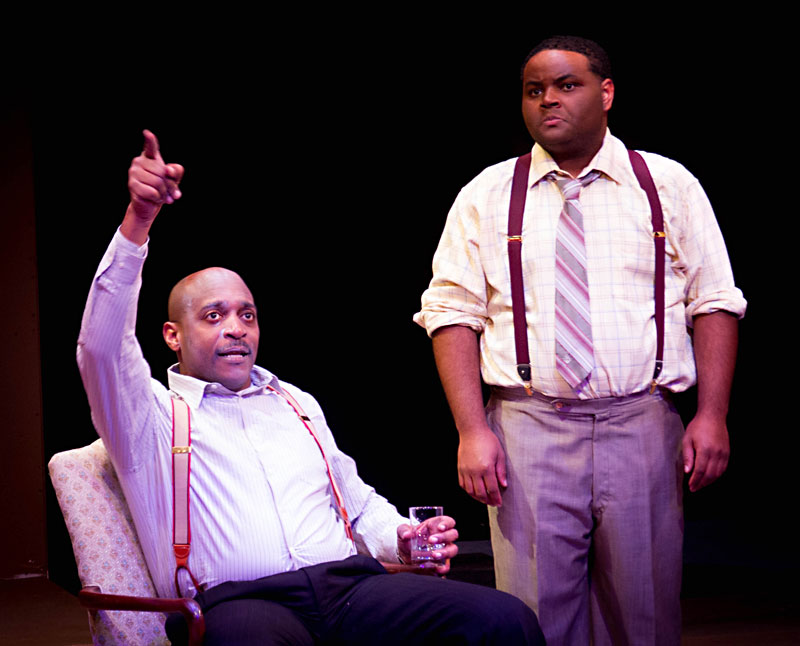 Kansas City, 1947. Jackie Robinson has just broken the color barrier, becoming the first African-American in major league baseball. Full integration is looming, and its implications weigh on the minds of all. Satchel Paige and the Kansas City Swing, now at bat for Austin Playhouse, throws a bit of a curveball with the script, but the production itself is a line drive straight down the middle.

There's a lot happening in Trey Ellis and Ricardo Khan's story about Negro League legend Satchel Paige (Marc Pouhé) and his eventual stardom in Major League Baseball. Paige leads his All-Star team, barnstorming the country against Bob Feller's Major League All-Stars. A stop in Kansas City lands them in the boarding house of an old friend, Mrs. Hopkins (the velvet-voiced Carla Nickerson). While love of the game seems to outweigh racial tension for Paige and Feller, not so for their protégés. Talented, cocky Negro League player Art Young (played by a charming and energetic Patrick Gathron) faces Stephen Mercantel's deliciously smarmy Franky Palmieri, a high-paid rookie big leaguer. Their animosities wind up when both throw heat at Mrs. Hopkins' daughter Moira, played with ambition and sensuality by Deja Morgan. Feller (a commanding Jason Newman) wants Paige in the second wave of African-American major league players, but will take Young instead if the prideful Paige balks. Paige's partner, first-baseman Buck O'Neil, is offered a job as the first African-American talent scout for the majors. Egos collide and big decisions are made as all wait to see if tomorrow's game will be rained out.

At its strongest, the play asks us to consider another side of desegregation from a black perspective: its effect on black-owned businesses, culture, and the hearts of its athletes. It's a fascinating and fully engaging concept: even with the huge win came losses, the sort of which white privilege stalls a deeper understanding. Mrs. Hopkins is a strong, proud woman, but her boarding house is losing money as her regulars are finally allowed at the "White Only" hotels. Moira is lost in a world of new opportunity and seems unable to make the wisest choices. Robert King Jr. brings to O'Neil a quiet dignity, knowing his dreams can and must change, but struggling to find peace with his future. And Pouhé's Paige is perfectly unhinged, switch-hitting his emotions like a future Hall of Famer as he struggles with a legacy now shadowed by Robinson – an inferior player in a superior moment in time.

I was left hungry for more of these facets in a script that's not quite sure what it wants to be. Musical numbers occur, but this is not a musical. Realism seems dominant, but an ever-present Jazzman (the delightful Billy Harden) occasionally offers insight and wisdom from a piano in the wings. Discussing the shift into surrealism would divulge too much, and for me, the love triangle steals from what I feel are the stronger points of the story, taking a lot of stage time to make a rather peculiar point from out of left field: Ambitious women will always doom great men?

Disjointed though the play may be, Austin Playhouse Producing Artistic Director Don Toner focuses on its strengths and turns a bunt into a double with some strong performances, giving us what I imagine is the best possible production of a play that could use some more time in the farm system. Buffy Manners' costumes are perfect, and the set is an interesting mix of physical elements and digital projection, used to great effect by designer Mike Toner and sound/video designer Joel Mercado-See. Though I was left yearning for extra innings by a production that far outshone the script, I think of the writing as a rookie pitcher not quite ready for a no-hitter, and the production itself as relief coming in late for the save. Errors and all, the game is worth catching.