In four ballets, three ways of collective being and one irrelevant romance 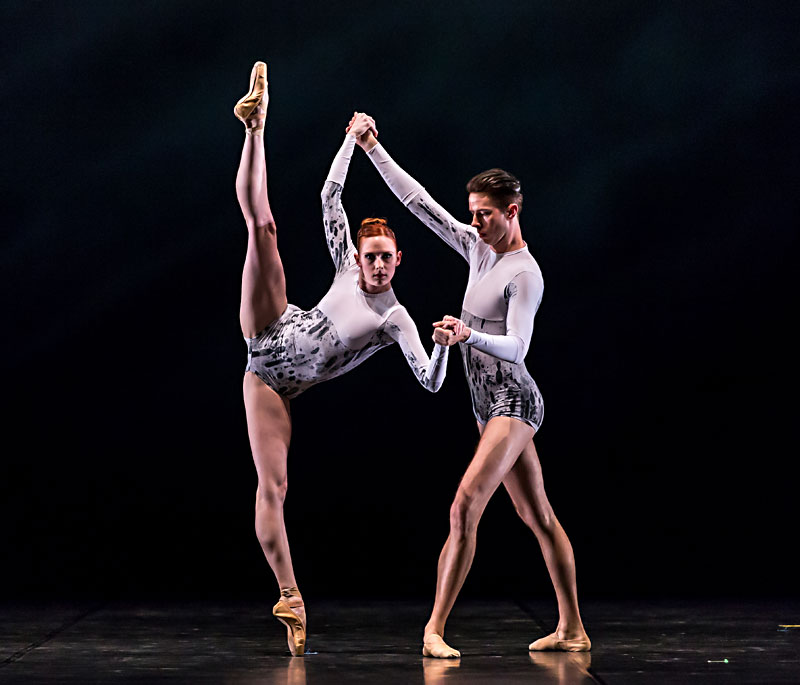 In a video introduction to Pontus Lidberg's Stream (2013), the opening work on Ballet Austin's Director's Choice program, the Swedish choreographer said he was inspired by the Buddhist idea of relinquishing oneself to the whole. To a lush, string-based composition by Ryan Francis, and wearing flowing pants and bodices in watercolor periwinkles and teals (designed by Reid Bartelme), 10 dancers wove among one another as though propelled by currents. Ebbing in and out of vignettes under mercurial lighting by Michael Mazzola, they seemed to exist just below the surface, refracting and reflecting in an overworld's indifferent filtering and shadows.

Two other group pieces, New Yorker Pam Tanowitz's premiere Early That Summer and Ballet Austin artistic director Stephen Mills' CARBON53 (2014), suggested harsher views of collective life. In Early That Summer, nine dancers were like drafting compasses, their limbs ending in points and protracting into the complex workings of a precise world. Tanowitz made the dance to a modern composition by Julia Wolfe, which was performed live by the Cordova Quartet. Doors opened: Dissonance melted momentarily into warmth; points rested briefly into curves. Occasionally, dancers appeared in front of and behind the proper dance floor, suggesting that outliers were, if not part of the system, an accepted fact of life. But in CARBON53, for which Mills was inspired by Xerox art and DNA, there were no outliers. When individuals and pairs appeared center stage, it was because the group, in a straight line 18 deep, had dropped them there on its perpetual journey from stage left to right and back again, followed by a rectangle of light (designed by Tony Tucci). Slicked-back hair and unisex costumes in both works made individual dancers barely distinguishable. But if Early That Summer showed us trying to get in, keep up, and get ahead, CARBON53 was a portrait of going through the motions.

The other work on the program was Mills' duet Desire (late 2005), set to Arvo Pärt's exquisitely gentle Spiegel im Spiegel, played live by members of the Austin Chamber Music Center. Despite nuanced dancing on Saturday by Ashley Lynn Sherman and Frank Shott, it was impossible to keep out of mind another duet to the music, a widely performed excerpt from Christopher Wheeldon's After the Rain (early 2005); in both duets, the music compels us to behold the poignancy of a sparsely clad heterosexual couple. But while Wheeldon's duet is open and optimistic, Mills' is about breaking up (it's also the last work, he said, for which he created the steps on himself before giving them to the dancers). We saw the beauty in brokenness: Sherman was half-risen to pointe, her lines delicately broken at the elbows, her knees fallen inward, a shoulder raised. But for most of the piece, Shott was behind her, lifting and manipulating her. What about him? What about her, if she were to support and balance herself? I found it difficult to engage with Desire because no relationship I have known – and thus no breakup, even the ones that ended, as Desire did, with one person accepting the hand of a new lover, offered from the wings – has looked like that.