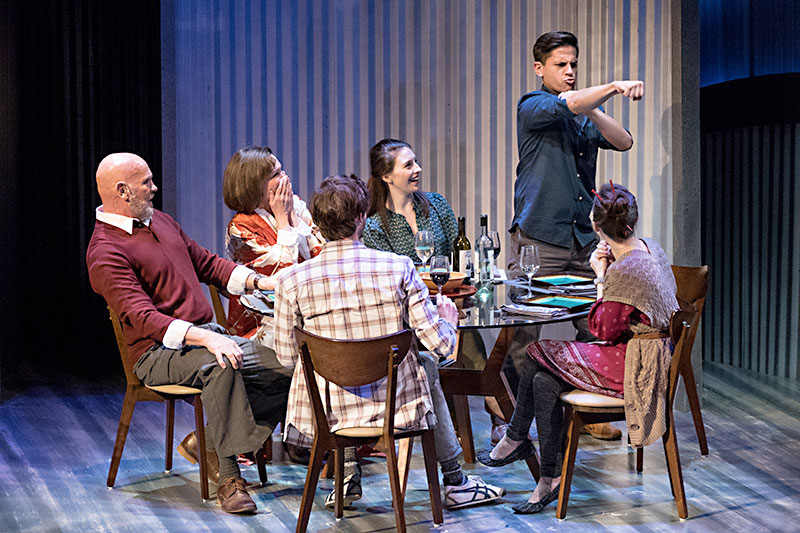 At its outset, Tribes seems like a story about what it's like to be deaf in a hearing family, and a dysfunctional one at that. Billy (Stephen Drabicki), who is deaf and an expert lip-reader, has grown up in a family that never learned or taught him to sign. Now that he, his brother, and his sister have all returned to live at their parents' London home, it seems like at least one argument is brewing at all times between any two people, and more often than not the combatants are too swept up to let Billy see their faces or to let him know what's being said. Throughout the play, sounds are cues to everyone but Billy: telephones hidden in pockets, the buzz of a radio, knocks at the door.

Yet Tribes emerges more as a story about language and hearing as understanding. Billy's brother Daniel (Aaron Johnson) is struggling to finish a thesis that suggests language is meaningless as he combats the symptoms of schizophrenia. His sister Ruth (Ava L'Amoreaux) has ambitions to perform as an opera singer and is essentially ignored whenever she speaks, especially by their father (Mitch Pileggi), a successful and fantastically arrogant writer. Their mother (Babs George) is attempting to write a detective story herself without much of a plan, which seems to be how she lives life.

The one person who manages to both bridge the distance between the members of the family and tear them further apart is Sylvia (Iris McQuillan-Grace), Billy's new girlfriend. She was born to deaf parents and now as an adult is losing her hearing. It is she who teaches Billy to sign and introduces him to the deaf community, even as she grieves the loss of her connection to the world of sound. Billy introduces her to his family, who alternately embrace, insult, and challenge her. Billy's shifting identity as he gains independence from his family sends ruptures through the fault lines of this family, and it becomes apparent how they have relied on him even as they have failed him.

For Zach Theatre's production of Nina Raine's script, Producing Artistic Director Dave Steakley has gathered an experienced ensemble of actors – who surprisingly needed about 20 minutes to settle into their performance and their accents on a recent Friday evening. Once they found their rhythm, the idea of these five people as a family could coalesce. Each performer has moments in which his or her character is made vulnerable, and these are the play's best scenes. Worth mentioning especially is one particular family fight, when Billy stops trying to understand. Ignored, he idly practices a few signs that Sylvia has taught him – clumsily, just as it is for someone learning a new language. It may be that an audience member fluent in sign language can perceive further subtleties in Drabicki's signing performance.

Michelle Ney's set is a major contribution. The walls of all locations are constructed from waves of corrugated metal, perhaps as much for their imagined impact on sound quality as for the sterile feeling that surrounds the family home. The walls also serve as screens for subtitles during some sign language exchanges. Though it requires some imagination to perceive the cold walls as part of a home for even this family, it's a set that impressively serves many functions.

Tribes is a heady, intellectual exploration into how people understand one another. Language takes different forms and serves different purposes. To discover a genuine connection, the play suggests, people who love each other must forge their own means of understanding.

A version of this article appeared in print on February 12, 2016 with the headline: Can You Hear Me?