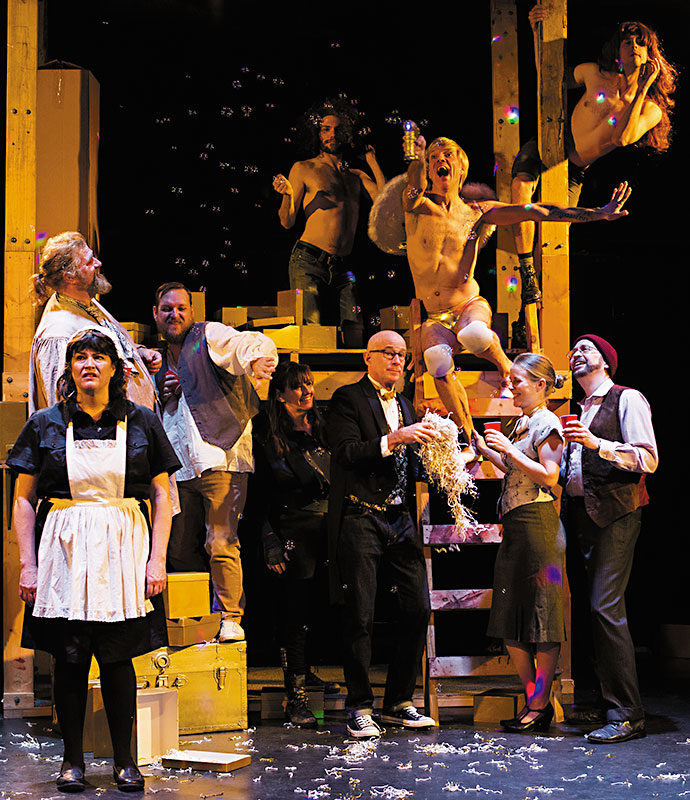 Here's a confession: I'm not overly fond of William Shakespeare. I respect the work, with all its linguistic acrobatics and poetic virtuosity, as much as any actor should, it's just not my particular bourbon. The derisive glances I receive from other artists when I offer this opinion (rarely, and usually after a few bourbons) only serve to compound my disfavor. Take away my actor card, my playwright card, and my critic card. I've just never cared much for ol' Billy Shakes.

Still, even I know it takes some softball-sized cojones to explicitly claim the work is broken – graduated to basketball-sized upon claiming you can fix it. But damned if that's not exactly what the Rude Mechs have done with Fixing Timon of Athens. The second installment in their Fixing Shakespeare series (following their 2013 smash Fixing King John) takes another of Shakespeare's lesser-loved plays and gives it some much-needed TLC. Kirk Lynn's script, under the skillful direction of Madge Darlington and co-director Alexandra Bassiakou Shaw, strips down the original and sells it for parts, with a result that plays more like an episode of Deadwood on meth; every "cocksucker" and "motherfucker" is lovingly crafted, every dick and fart joke highlighted. This is important, as Shakespeare's work is chock-full of this stuff, possibly unbeknownst to the theatrically uninitiated.

And that's the brass ring. Lynn makes Shake­speare wildly accessible, and in ways differing from other common attempts. Most companies simply reframe classical work in a fresh setting or take a few liberties with gender assumptions in order to increase the appeal, with varying degrees of success. But a gender-bent Troilus and Cressida set on the moon, for example, may seem overly pretentious to the layman who doesn't attend live theatre, for this very reason. Lynn rebuilds the story from the ground up in a modern tongue for everyone. Well, maybe leave the kids at home. We still have a rich and generous man betrayed by friends in his hour of need, only in a way Shakespeare might write it today. And as a master smuggler of ideas, Lynn also sneaks in some modern sociopolitical commentary, so we have important messages told within reach of those who most need to hear them. Everyone is included.

It's this inclusion that makes the play work so well. There's a keg onstage, and the audience is welcome to it. The actors aren't backstage before curtain, they're milling about the space as themselves, greeting friends, making new ones. There is no ego, only an invitation to a shared experience between audience and actor. To call it an "all-star" cast would be an understatement, with Austin heavy-hitters Barbara Chisholm, Elizabeth Doss, Ellie McBride, Robert S. Fisher, Lowell Bartholomee, Jay Byrd, and Chronicle Arts Editor Robert Faires hoisting Tom Green in the title role. The love each has for the script is evident through captivating performances (and no, Faires does not give bonuses for favorable reviews of his work, so ease up off my credibility, sucka). In multiple supporting roles are Vince Tomasino and Nate Jackson, both holding their own among these giants. It's difficult to stand out in this cast, but Jackson does so with ease.

In a time when the relevance of live theatre is often tested, this kinetic and f-bomb-laden production stands with open arms, welcoming groundlings and titans of industry alike to a modernized parable worthy of consideration. I was enthralled, and I encourage you to see this and even bring a friend who doesn't care for theatre. The evening is a grand reminder of the power of live drama, and I may even like Shakespeare a little more now. Damn you, Kirk Lynn.