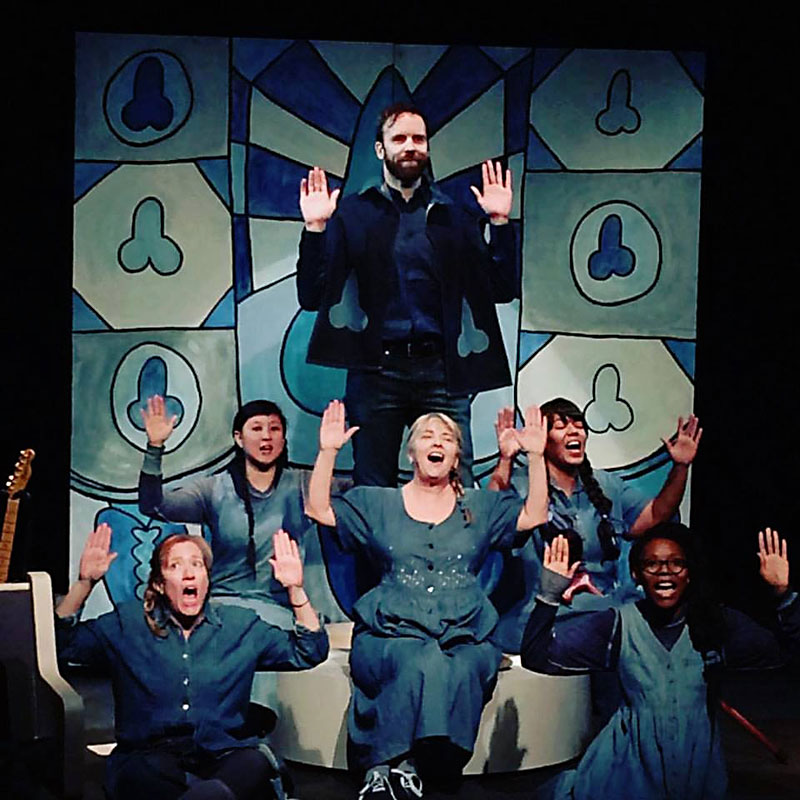 At its opening, Denim Doves doesn't seem like it's making any kind of original feminist statement. Five sister wives live together in a bunker in a postapocalyptic setting. They live in fear of failing to reproduce on behalf of their shared husband, collectively and loudly referred to as "the Penis!" He appears to wield total authority. They sometimes lapse into a goofy sort of language that only women speak in this world. Everybody wears denim. Seems pretty Second Wave.

Then things start to get interesting. More and more, it appears that First Wife (Cyndi Williams) is running more of the show than most of the characters realize, and Penis (Judd Farris) is not actually on top of things. In any sense of the phrase. Also, where is Fourth Wife (Henna Chou) running off to? And how?

When a Sixth Wife (Jenny Larson) adds herself to the ranks of the sister wives, whatever fragile system has been in place in this shelter begins to crack. Sixth Wife is pretty outlandish for a woman in this society: Her father took only a single wife, and with his blessing, she even got to tour what's left of Europe before being tossed into marriage. One of 12 siblings, she bursts onto the scene, totally confident that she is so fertile that she can end the baffling dry streak that has resulted in only one child (Erik Secrest) born out of five whole marriages. Plus, her denim is acid-wash.

Adrienne Dawes' script continues to evolve from there. The many-wives cult is a cool concept for a story, one that seems to find itself the target of mainstream fascination every few years, and Dawes' take on it turns out to be amusing and pretty original.

I am almost but not totally confident that I understand what's revealed in the play. There's a tricky balance in creating a world like this, in trying to provide enough information but still leave enough to the imagination. Denim Doves proves both amusing and confusing, and it's not clear exactly in what direction events are headed as the show closes.

Like the rest of the show, Kaci Beeler's churchlike set design is unapologetically explicit in its use of phallic imagery. The brazenness with which sex and menstruation are treated in the production is actually refreshing. Even if other elements of the story aren't completely coherent, it's nice to see certain aspects of the scenario explained and to know that I'm not the only woman who's ever read a work of imaginative or dystopian fiction and wondered how a girl's period is supposed to fit into all that.

It's not uncommon for shows that premiere locally to enjoy another production in the not-too-distant future. With a strong ensemble and creative direction from Larson and Florinda Bryant (who plays Fifth Wife), Denim Doves is certainly worth seeing during this busy time in the theatrical season, and if it returns after coalescing a little more, it may prove one of the more exciting creations to come from Salvage Vanguard Theater's season.