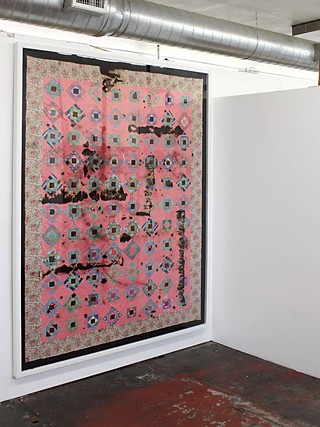 Nirvana plays on the radio – and for a few years now, in a way that no longer seems out of touch. Generation Xers, largely in their 40s and 50s, hold increasing sway over American culture, politics, and the economy. The sad fact that they have less wealth than their parents at the same age no longer feels like a fluke, having repeated itself for the millennials after them. The class polarization and American Dream-burnout prophecies of grunge are now widely accepted as gospel truth, or even platitude. And so Cali Thornhill DeWitt's solo exhibition at Farewell Books feels fitting for the present moment: The faded optimism of the Seventies and early Eighties scarred by the jadedness of the Nineties, wrapped up in a slick, expensive container.

Despite being born in 1969, Los Angeles-based DeWitt and his artwork seem to exist on a generational cusp. His head is with the millennials, but his heart is still wearing tattered jeans and threadbare flannel. Four of his works grace this bite-sized exhibition. Three home-sewn quilts sporting burn marks displayed behind improbably large framed glass dominate one wall each. Dwarfed by its neighbors, a small photo reproduction print of a splatter painted bouquet takes the only remaining space. Each stained, faded pastel Junkie Quilt (you know, the ones you drop your lit cigarette on after shooting up) demands a quasi-religious reverence given its size and display. The burns will not be mistaken for accidents, following along straight lines: a grid, a giant X, and a single dotted vertical. These are intentional, so rather than creating the fiction of a found object, DeWitt appropriates the aesthetic of cultural failure as a palette to create something new. Unlike the rebellion of Nineties 20-year-olds, these works use the low and the high end with equal fervor, and, in a way only a millennial could, let go of any moral high ground, embracing its own hypocrisy and paradox. The works dredge up society's seedier side and put it in its face – but in a way that participates in the same systems of value and commodification that it critiques. The display of the quilts in these logistically perplexing frames moves the dark subject of the heroin epidemic into mainstream territory, something to be puzzled over, though comfortably and with clinical distance, something with entertainment value separated from real life by a pane of glass. 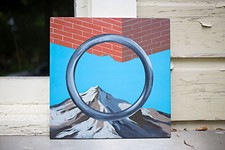 "Conner O'Leary: Requesting Entrance"
Surrealism is alive and well at Farewell Books, thanks to the art of Conner O'Leary 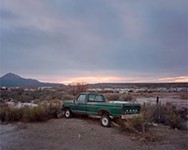 "Matthew Genitempo and Schutmaat: Motor Chronicles"
These photographs frame the isolation and beauty of the American West but keep it at a distance