Audiences gained much from this program's re-creations of historic dances by Isadora Duncan, Loïe Fuller, and Lucia Dlugoszewski 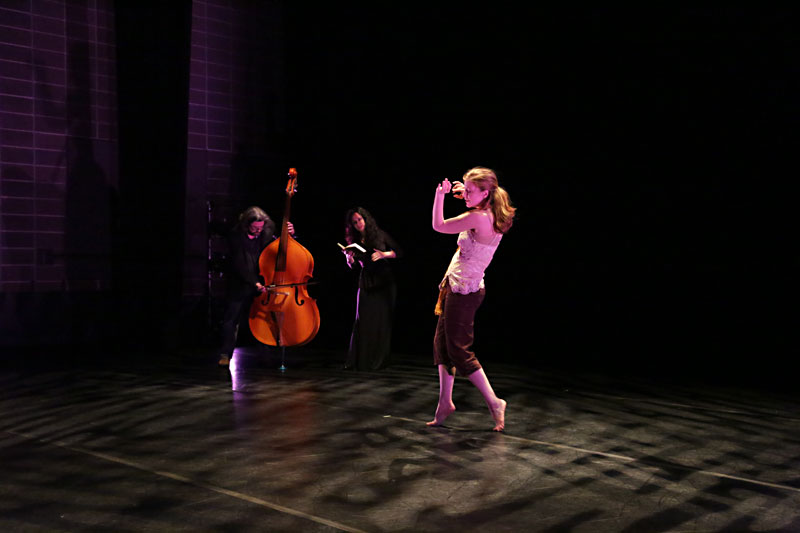 In April 2000, the Erick Hawkins Dance Company premiered Lucia Dlugoszewski's "Motherwell Amor," a contemplative ode to the paintings of Robert Motherwell, at the 91st Street Playhouse in New York City. It was just two days after Dlugoszewski's death, and the audience at that performance was asked, out of respect, not to applaud. As part of Dancestry ... Vivid, a program of historic dances presented by Shay Ishii Dance Company, a quartet of Hawkins company dancers – including two from that original cast – revived "Motherwell Amor." It was sandwiched between revivals, reconstructions, and reimaginations of works by Loïe Fuller (1862–1928), a solo performer credited with innovations in lighting and modern dance, and Isadora Duncan (1877–1927), the bare-legged, frolicking Mother of Modern Dance.

Jessica Lindberg Coxe, a Fuller historian, performed an update of Fuller's iconic "Lily of the Nile." Early 20th century solos like "Lily," performed in a white silk robe with a wingspan extended by poles, made Fuller famous for her innovations with colored lighting. In "Lily Reimagined," the silk was a canvas for digitally created projections (by Kevin Abbott, Raeann Burkey, and Evan Carlson). Coxe, with Megan Slayter, also reconstructed Fuller's ensemble piece La Mer, a seascape confection of rippling silk, for a group of students from Texas State University, whose performance was strangely pedantic save for two mirthful nymphs with sea-tousled hair.

The Fuller pieces were woven among performances by Meg Brooker, a Duncan disciple with a direct lineage. Brooker danced three of Duncan's solos, collecting them as "Suite for Russia," where Brooker has visited frequently to research Duncan's work there. Later, with soprano Misha Penton and contrabass player Brent Fariss, Brooker performed an immersive meditation on Duncan's complicated inner life, a scarf – perhaps the one that would eventually catch in the wheel of Duncan's car and strangle her – wrapped daintily around her neck.

While the legacies of Fuller and Duncan are well covered in dance history textbooks, Dlugoszewski (1931–2000) is often outside their scope. The second wife of choreographer Erick Hawkins (following Martha Graham), she was a musician, composer, and choreographer who led Hawkins' dance company after his death. Staged by current company artistic director Katherine Duke, "Motherwell Amor" was backed by projections of two of the artist's paintings and accompanied by Dlugoszewski's own raucous composition. As her stealth percussion led into warm staccato brass – like a salon of elephants engaged in animated debate – pairs of dancers heaved each other up and over themselves, testing weight and balance, and elucidating those same considerations in the paintings. An intelligent and passionate ode, the piece read as more midcentury than Y2K.

We had much to gain from the obsessions of Coxe, Brooker, and Duke, even if, programmatically, highlighting this particular smattering of points on the timeline of 20th century Western concert dance seemed mere happenstance. A sixth work on the program, "Tracing the Ether," with choreography attributed to dancers Coxe, Ishii, and mother-daughter duo Anna and Arianna Antoniewicz, lacked program notes (plentiful elsewhere) to suggest how this work expressed the historical theme. "It's a test," joked two women seated behind me. While the work used floor silks and robes like Fuller's, there was little colorplay over the bright white, and while the dancers attempted a few of Duncan's frolics, their voluminous robes, paired with silver scarves wrapped tightly around their necks and faces, obscured and restricted their movement. Where were our foremothers' gifts of innovation, freedom, and attention to form? The women behind me planned a coffee date to discuss it.

Shay Ishii Dance Company
In 'New Moon,' a dance to remind us how to let go